Tim Stauffer makes his first start since 2014 as the Padres look to even up the series in game 2 against the Cubs.

Our Padres have now been on the losing end of five of their last eight games. Last night's loss was their fourth straight, and not how they wanted to kick off the series against the Cubs. Tonight they'll try to get things going against Edwin Jackson and give Tim Stauffer some offensive support in his first start of the season.

Stauffer will be making the spot start for an injured Robbie Erlin, who had been added to the rotation in place of the Josh Johnson. This will be his first start in just over two years, as Corey Brock recounted yesterday:

Tomorrow's start for Tim Stauffer will be his first since 5/14/12 vs. Nats. Went on DL 4 days later (elbow sprain) and didn't pitch again.

As the second long reliever to leave the bullpen for a starting role in the past week (see: Donn Roach), hopefully Stauffer can put forth a nice, long outing to salvage relief efforts following Eric Stults' short (4 2/3-inning) appearance in the series opener last night. Stauffer has made 12 relief appearances this season, totaling 18 2/3 innings while posting a 2.41 ERA. He's a career 0-2 in three starts against the Cubs, but even the last of those outings was in 2011 it was the same old story: he kept wins within reach with a 2.37 ERA in those three games (allowing only one run in each of the last two), but the offense failed to score a single run of support for him.

San Diego will have to get some better offense going against Jackson tonight if they want to help out Stauffer. Seth Smith, who is currently the second best slugger in the league (.615 SLG), is 21-for-42 with two homers and eight RBI in his last 11 games at home. Last night he went 1-for-3 with a walk and a home run - the only run of the night from the Padres. But other than that, the offense continued to struggle and fail in getting runs home.

Several Friars have had success against Jackson in the past, however. Here's how our current active roster has fared in the last five years against him (via mlb.com): 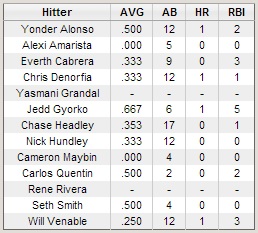 Make sure to check out Darklighter's series preview with Sam Fels of The Ivy Drip, if you haven't already, and tune in tonight at 7:10 PDT to see some hopefully Stawesome pitching in game 2.