My first visit to Coors Field

Share All sharing options for: My first visit to Coors Field

I was on vacation last week touring National Parks in the Southwest United States.  My ultimate destination was Denver.  It wasn't until midway through the week that I came to the realization that the Padres were playing the Rockies on the night before I was to leave Denver for home. The coincidence that the Padres and I would be in the same place at the same time and the fact that I had no idea until a two days prior blew my mind.  Some fan I am.

If I've counted correctly Coors Field is my 10th Major League ballpark that I've visited.  For me though it's not about seeing other ballparks so much as seeing the Padres play in said ballparks.

I was really excited about visiting Coors.  It was on the top of my list of the remaining ballparks I wanted to see.  My excitement, however, immediately turned to frustration as the park employees in my line couldn't get their ticket scanners to work.  Every line was moving except for mine.  I decided to switch to the line that didn't have a bag check and seemed to be moving faster.

I ducked under a nylon rope and then that line stopped moving.  I was wearing my Padres Parka and like George Costanza wearing Gore-Tex in the liquor store, my increased bulk made me clumsy. I accidentally knocked the nylon rope off the stanchion.  Upon noticing, I fixed it.  What I wasn't aware of was that I had knocked the rope off of two stanchions.  A white bearded park usher saw it happen and instead of just fixing it himself ordered me to fix it while staring me down the entire time.  He was a total dick.  It's amazing how quickly a low level employee can besmirch an organization in the eyes of the customer. 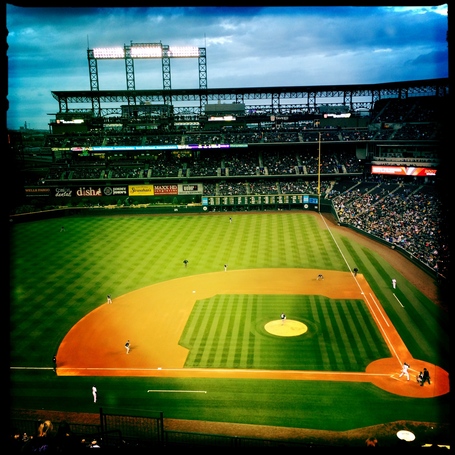 I bought seats in the upper deck behind 3rd base.  The view was nice.  The park seemed smaller than it did on television and didn't quite create the Rocky Mountain High that I was expecting and for that reason I was a little disappointed.  I didn't bother going up to sit in the purple row, perhaps that would have helped.

I also didn't see much that was uniquely Denver, except for a severe weather sign:

The men's room doubles as a severe weather shelter, which is nice. pic.twitter.com/CZASicKsPA

For dinner, I had a berry kabob, a hot dog and a hot chocolate.  There weren't a ton of Denver-style foods as far as I could tell either, it all seemed like pretty standard ballpark fare.  I should have checked Yelp! for recommendations I guess.  About that time I realized how lucky we are in San Diego to have so many food options beyond cold nachos and leathery hot dogs. We have those too, but also have so much more.

During the game one Padres fan a few rows in front of me held a sign to thank San Diego Fire Fighters which everyone applauded.

The first 6 innings flew by.  Both teams were hitless for a while and the big offense we've come to expect from games at high altitude just didn't live up to my expectations.  The weather report forecasted thunder storms throughout the game, but luckily we only experienced a light drizzle.

In the last 3 innings I walked the perimeter of the ballpark.  The bullpens are fantastic, the best in baseball.  You can't ask for much better accommodations as a pitcher.  There were a group of Rockies fans heckling our boys.  I helped them out with Padre pitcher's names.

Rockies Fan to his friends: "Who's the guy with the mustache?"
Me: "Oh, that's Dale Thayer."
Rockies Fans: "THAYER YOU SUCK!!" 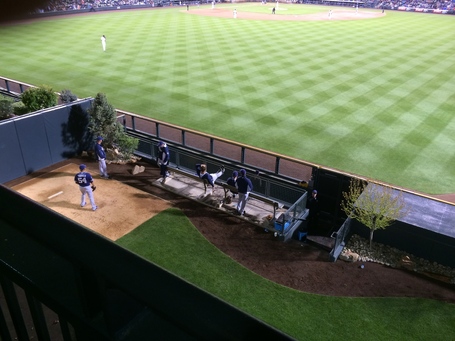 I spent the remaining two innings in the outfield concourse, hoping that the Padres could complete their comeback but they came up short.

I'd heard so many good things about Coors Field, but I thought it was just alright, it didn't seem that special to me.  Maybe it was the dick usher who dampened my mood.