Share All sharing options for: Padres jersey popularity as decided by 2014 Little Leaguers

The Padres Little League Initiative is back in 2014 and the greatest community outreach program in Padres history continues to thrive in its third year. We went to the Padres Media Preview Night earlier this week and they had some of the Little League uniforms on display. Kids nowadays don't know how lucky they are, in my day we had to pay to wear other team's jerseys, blech! Now they get their hometown team's jersey for free.

As the program enters its sophomore year, let's look at the new results of the distribution and compare the popularity of each of the uniforms to last year.

The only difference is that the D-Backs have a sponsor paying for the jerseys. I'm told that the Padres are the sole sponsor of their program and don't place any advertisements on the jerseys. She said that they are also working with the Mariners to possibly help them start their own similar program. With any luck they won't try to take credit for the idea like Hall did.

The Youth Baseball Initiative, as it's sometimes called, is a great program for both the team, the Little Leaguers and the community. Former Padres President Tom Garfinkel who truly came up with the idea told us in February "It's great for those kids and for the game and I hope 28 other teams jump on board too".

Out with the Old

While the number of jerseys given to the kids has jumped to more than 14,000, the number of jersey styles has decreased. When the Initiative started in 2012 the Little League teams were given a choice of 20 different Padres jerseys. Last year that number was cut to 16 uniforms. This year it was cut again to 12 uniforms. They decided 16 was still high in terms of options. I'm told by the Padres Vice President of Community Relations Sue Botos that they think they've hit the right number with 12 different styles. The LL teams have said that with 12 styles they would have greater flexibility when exchanging and sharing sizes throughout their leagues.

Choosing the jerseys to be cut from the roster couldn't have been an easy decision, or maybe it was, what do I know. 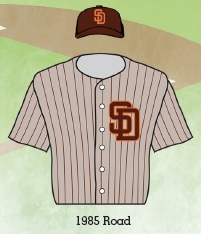 Oh, I see how this is going to work, the least popular jerseys from the previous year get axed. I get it, this is a results oriented game. I'm sad to see the brown pinstripes go though. This is a great uniform and one the Bring Back the Brown crowd loves. I get this too, I was in my formative years when the Pads were wearing these. If today's spoiled kids can't appreciate it, then maybe they don't deserve to wear it. I'm sorry that's just how I feel. 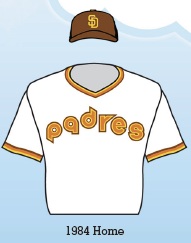 It was just a matter of time before one of the 1984 jerseys was cut. Each year this jersey is ranked lower and lower among juvenile delinquents that fill youth baseball. Don't they recognize the greatness attached to this jersey? Would Garvey have crushed that home run ball in Game 4 if not for this jersey? That's debatable. Someone should give kids a long sleeve flesh colored undershirt with hairy Garvey forearms with each of these jerseys, then maybe they'd get it. 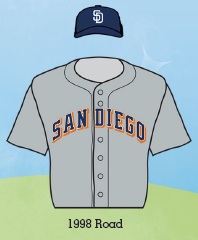 Woah, for some reason the Padres thankfully spared the other 1984 road jersey even though it was ranked 14th last year among the childrens. Instead they sacrificed the 1998 gray jersey and I'm okay with that. I have fond memories of Kevin Brown and Ken Caminiti wearing this jersey but it's still gray, very very gray. 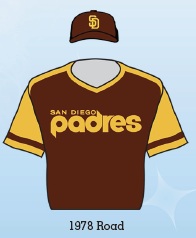 1978 Road top loses out because it was 12th last year and deemed not worth saving. It's strange that this one fell out of favor. It was ranked 7th in the first year when there were a more choices. This was their favorite brown uniform then, but they sent a clear message last year that they have moved on. It's a shame because it feels very Padres to me, I like the font and the fact that it's a pull over. I love pullover jerseys.

In with the New

Okay, now for the rankings of this year's 12 uniforms. 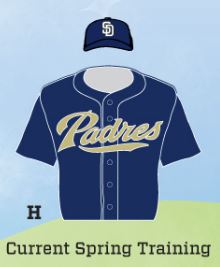 Kids love presents and the present. This is both of those things. They don't dwell in the past because they don't have a past. The idea that they'd rather wear a current batting practice jersey over a historic game jersey speaks volumes, but mostly about their immaturity. Maybe they're maturing though because this uniform dropped 6 places in the rankings. 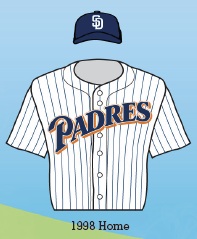 When I see this jersey I think of Will Cunnane and Joey Hamilton. It's very 90's, but in a good way like Dawson Leery's haircut. I actually like the uniform more when the current team wears it as a throwback. The blue is much darker and more brooding. This one dropped a spot in the rankings. 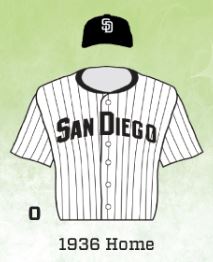 This is the uniform Ted Williams wore early in his career. It's hard to tell if this uniform is black or has really dark blue pinstripes, especially since all of the photos of that time are black & white. I think the true corresponding hat didn't have a logo either, but most of the caps given to Little Leaguers don't match the corresponding jersey exactly. 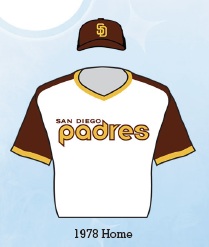 This is the 1978 jersey made popular by the All-Star game. This is the only jersey I own. I love it. I don't really have more to say about it, I've just been staring longingly at it for about 2 minutes. I should go put it on. This one is gaining popularity, up two spots in the ranking. 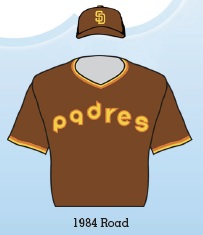 As I mentioned above this jersey was given a pardon by the Padres. Even though it was ranked 14th last year and should have been cut, it was saved. The kids approved, it jumped 6 spots in the rankings. The graphic doesn't do this jersey justice, you really have to see it in action to fully appreciate it. 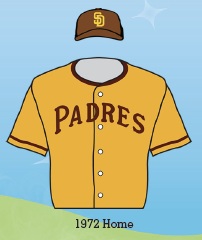 I like these 1972 home jerseys, because it puts the gold on display. I get a little irritated when Padres fans want to Bring Back the Brown but not the gold. The Padres have two true colors that they're associated with and we need them both back, together. 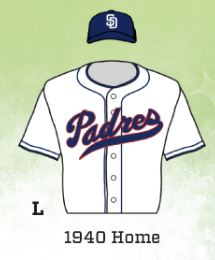 This jersey was labeled as a 1948 home jersey last year, but appears to be exactly the same. My favorite part about this jersey is the Padres script. It's infinitely better than the current Padres script with the "P" that's supposed to look like a nautical sail. Dick Enberg thinks the Padres should wear red, white and blue and this uniform is "very handsome". If you want to side with Enberg, who can't contain his excitement when the Dodgers make a good play, then be my guest. The kids agree, it moved up two positions. 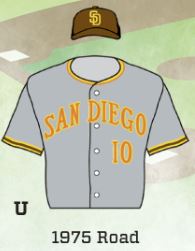 The 1975 Road jersey was white last year instead of gray. It's one of the better gray uniforms because, at least, it has some colors that make it pop. I don't remember these jersey's having orange lettering though. I thought they looked more like this. This one too jumped two spots. 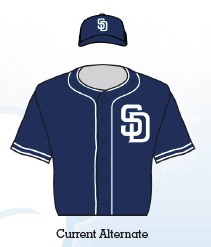 The top 4 jerseys are the same as last year. They're all part of the current uniforms. This alternate reminds me of Will Venable and comfy pair of pajamas It makes me irritated and sleepy at the same time. I have to admit though that it was an improvement over the old alternate but it's not really my thing. 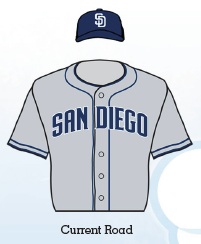 The top 3 jerseys have held their rankings for all three years. Kids love currents, that why you have to keep a close eye on them when they get near rivers. They'll be mesmerized and swept away by some Class 4 rapids if you don't keep a watchful eye. This one is gray. 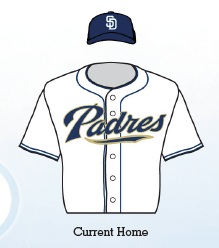 The home jersey looks very plane Jane to me, but when I think about it, it makes sense that kids like it. Kids refuse to eat anything but white bread, with the crusts cut off. It's like their taste buds haven't fully matured yet and they don't like spicy or exotic foods. "Give me something bland" they say. 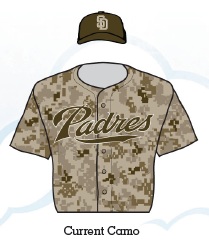 And for the third year in a row the Padres MARPAT camouflage jersey is the most popular kid in school, like Pacey from Dawson's Creek High School. The Padres were the first team to wear camouflage and the first to get permission from the Marines to wear their distinct desert pattern. The Little Leaguers are proud to support both the Marines and the Padres. The critics, however, continue to bash the Padres for wearing what they consider to be an ugly jersey, but more and more teams are using it, especially on Memorial and Veterans Day.