Share All sharing options for: Luis Perdomo Birthday Card: A journeyman looks at 30

Former Padres reliever Luis Perdomo turns 30 today. I hate to bring it up since it's his birthday, but in his season with San Diego he became known as "Oh No Perdomo" due to his propensity to surrender home runs. In 60 innings over 35 games with the 2009 team, Perdomo gave up 11 homers, starting with the first batter he faced in his major league debut. Fortunately for him and the Friars, neither that shot by Carlos Delgado or any of the ten that followed cost the team the game, since he was already mopping up in a lost cause when all of them happened.

Perdomo is pictured here on his 2010 Upper Deck card, number 415. This was Upper Deck's last year of making baseball cards, and their first to do so without an MLB license. As you can see, the picture on the front was carefully selected so as to show no logos, and the team name is nowhere to be seen either. 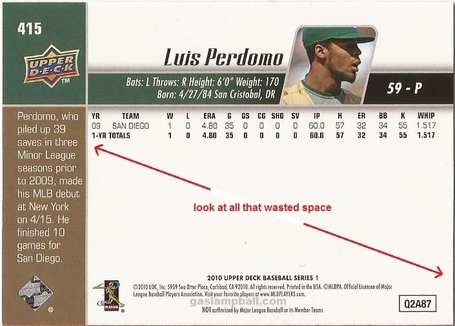 After this card was released, Perdomo got into one more game for the Padres... I'm sorry, I mean that baseball team from San Diego. Summoned from AAA Tucson on August 29, 2010, Perdomo came in to pitch the top of the ninth inning down 4-0 in Philadelphia and promptly added one more to his tater total, this time to the notoriously despicable Jayson Werth. He cropped up again for 15 games with the Twins in 2012, but nobody here cares about Arena League baseball, so I'll leave it at that. After spending all of last year with the AAA Rochester (NY) Red Wings, Perdomo failed to stick with the Washington organization this spring and is now plying his trade for Campeche in the Mexican League.

Happy birthday to Luis Perdomo, and best of luck working your way back to organized ball and then, who knows, maybe the majors.