As an important and influential member of the community, I was invited to attend the grand opening of the Bumble Bee Tuna headquarters in the newly renovated Showley Bros. Candy Factory at Petco Park.  I'm still not really sure who invited me, but I don't often turn down invites that include free tuna melts.

The Candy Factory is a key feature of the ballpark and one of San Diego's historic buildings.  It's the largest building ever moved in San Diego.  I created this time lapse animated GIF of the relocation from Fox Sports San Diego's recent special on the construction of Petco Park.

The building has sat empty for the past 10 years, with no plumbing, infrastructure or purpose.  That all changed when the Padres recently leased the building to Bumble Bee Seafoods.

When I arrived at the park, there was a group of about 20 Greenpeace activists protesting Bumble Bee's fishing.  I didn't think to get a picture until I entered the gates so their sign is difficult to read.  I think it had something to do with overfishing, but I'm not sure. 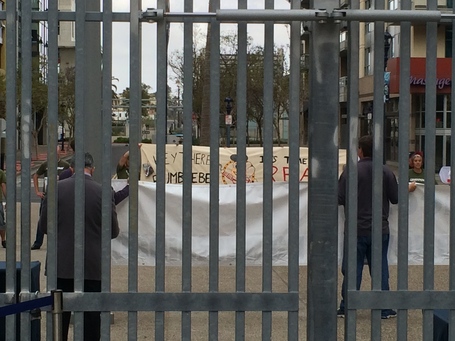 At the check-in desk there were some Padres employees looking up the names of guests.  I saw my name with "Gaslamp Ball (Padres Blogger)" along side it.  "So you're the blogger?" said the employee with a grin.  I responded, "I guess I am." with an awkward teeth bearing attempt at a smile.

Inside the Park at the Park, I knew no one, so I took a peek inside the Bumble Bee offices.  The actual offices were roped off but a friendly Bumble Bee employee gave me a tour of the first floor.  It promptly ended when Padres Executive Chairman Ron Fowler entered with his posse. 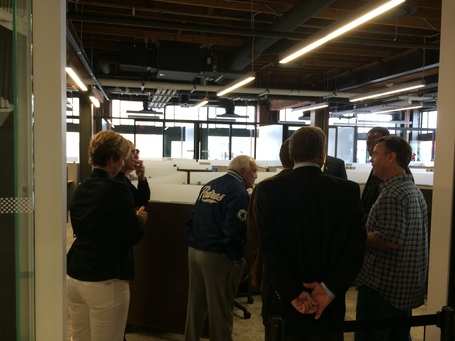 The offices have a nautical theme, but in a very professional way, it's by no means Joe's Crab Shack.  I learned that the carpets are made of recycled fishing nets and that the furniture incorporates antique canning and fishing equipment from Bumble Bee's warehouses.  As an example, underneath their distressed conference room table, as decoration, they are using a perforated cage used to hold tuna tins while they are being cooked. 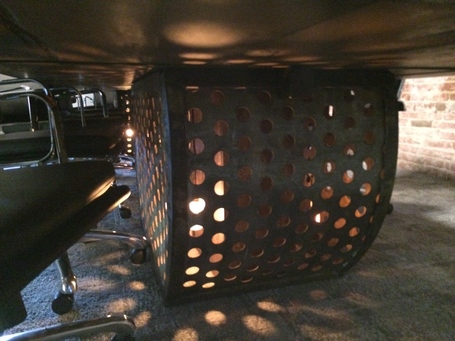 Easily my favorite part of the offices though was that every employee has adjustable desk.  Each desk had a digital control panel that allows them to raise and lower it depending on if they prefer to sit or stand while working.  After dealing with sciatica for the past 2 months, I would do anything for a desk like this.  Plus doctors say that sitting all day is more deadly than smoking.  I'm not going to lie, when I got home I fruitlessly searched for career opportunities at Bumble Bee.  Any company that provides standing desks is okay in my books, overfishing be damned. 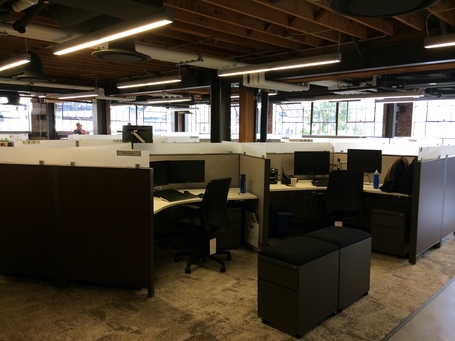 I asked another Bumble Bee employee if since their office opens up into the park if they, for practical purposes, get to enter Padres games for free.  I was surprised by the response.  Apparently the Padres and Bumble Bee installed a high tech security system that turns on as game time approaches, so that no Bumble Bee employees can enter a game through their building.  There's alarms, lasers, locks and presumably attack drones, all keeping them out.  I thought the Padres would just turn a blind eye to their tenants, but that's not the case. 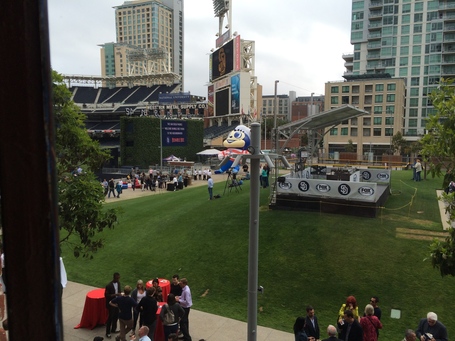 The speeches started at around 4:30 in the park.  The Bumble Bee CEO, Chris Lischewski, took the stage and thanked Ron Fowler, the Mayor Kevin Faulconer and past mayor Jerry Sanders for their support and attendance. 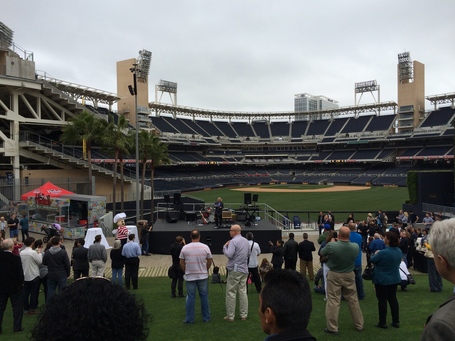 The CEO is a man of smaller stature but had eccentric shock of white hair.  As a soccer player himself he introduced Fowler as the one-time owner of the San Diego Sockers, which made me chuckle.  In his speech I appreciated the fact that when referring to the location of the company's past office, he correctly pronounced San Diego's community, Kearny Mesa, as KAR-nee as you would pronounce it's namesake General Stephen Kearny's surname rather than the more often used CUR-nee pronunciation. 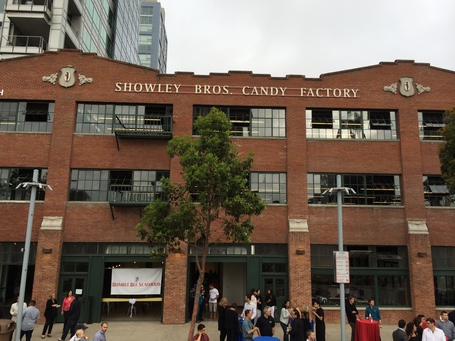 After the speeches the important people congregated in front of the Candy Factory for the ribbon cutting ceremony.  Bumble Bee's CEO had his son help him cut the ribbon with a giant pair of scissors.  To my delight they had the exact same hair. 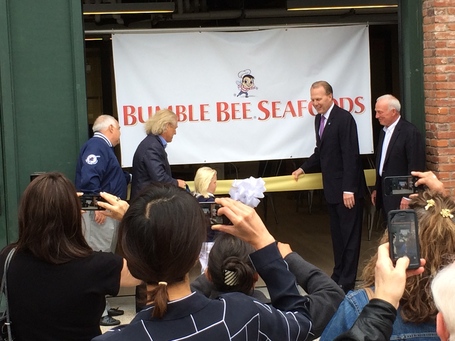 After the festivities died down I ate a delicious Tuna Melt from the stand that sits behind the Padres batter's eye.  I didn't know I liked Tuna Melts but this one was really good and free.  I'll definitely buy one again at some point in the season.

Thanks to whoever invited me, it was fun feeling like an important member of the community at least for an afternoon.