Google data shows Padres are the most "unpopular" team

A study by Besttickets.com found that, according to Google search data, the Padres are the least popular team in MLB.

Share All sharing options for: Google data shows Padres are the most "unpopular" team

Yesterday jbox shared this interactive fandom map from the New York Times that showed fan allegiance to baseball teams based on Facebook likes. Basically, it showed which teams were popular (on Facebook), and to what extent, in different areas of the country,

Besttickets.com also recently did a study on popularity in sports. They based their study on Google search data and found who were the most "popular" professional athletes in each state. California's most searched athlete on Google was Kobe Bryant. No baseball players made the list.

They also looked at which sports were the most popular in each state. In California, and an overwhelming majority of the country, it was the NFL. In no state was Major League Baseball found to be the most popular according to the Google data, but there were a few states that had it as the second most popular sport.

Next they looked at the most popular positions in sports. The first eight spots were dominated by football and basketball positions, but no. 9 went to the 1st basemen.

Finally, they looked at the most popular teams in each professional sports league. How did the Padres stack up with the rest of MLB according to the Google data? 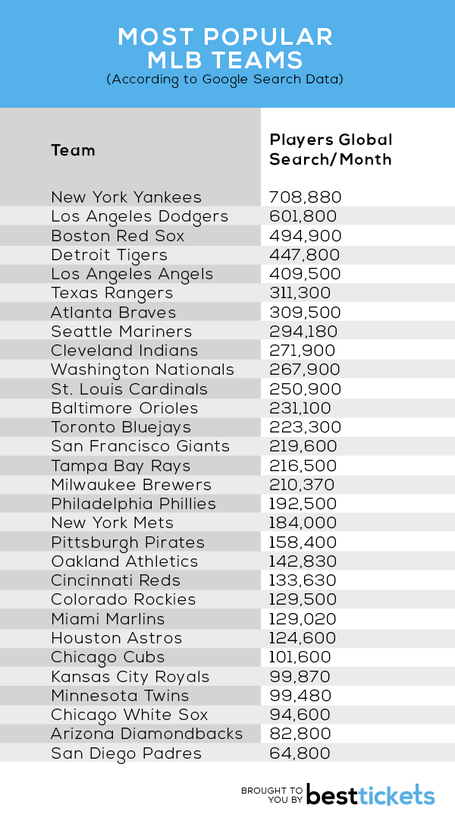 Yep. Dead last. It's hardly surprising considering that most of San Diego doesn't even seem to follow the team, let alone take the time to go on the internet and look them up. Or maybe this just means that Padres fans find other ways to get info on the team. Maybe they all come straight to Gaslamp Ball for their news, or listen on the radio, or read the newspaper.

Whatever the case, I'm sure that number will be going up throughout the year while we're making our World Series run and having to attach trailers to our bandwagon to make room for everyone.

You can find the rest of the study here.