Padres get a little creative and win again in extra-innings.

Share All sharing options for: Padres 4, Nationals 3: Twelve is the Lucky Number

For the second time in three games the San Diego Padres have won in extra-innings; once again closing out a one-run 12-frame game. This time it was less of a one-man-show and more of a theatrical combined effort with a few unexpected moments sprinkled throughout.

Starting off the evening in the second inning Chase Headley left the game after flying out to center. Alexi Amarista replaced him for the remainder of the day. The latest news is that the injury is a re-strain of his right calf, the same one that was bugging him back during Spring Training. He's looking to hit the DL.

Chase Headley will head to the DL with a right calf strain. Some confusion but ST strain was to left calf. Seth Smith, right groin, no DL.

On a much lighter note with significantly more offensive production, Seth Smith zipped a double into right field to allow Chris Denorfia to ninja a slide into home, effectively tying up the game 1-1 in the 4th. That was Smith's 7th RBI, which has him tied for second within the club.

The Friars would go on to pile a few more runs and lead 3-1 in the form of an RBI double from Yasmani Grandal. Eric Stults and Seth Smith were on base to score, from a very sexy double of his own and a seductive walk (respectively).

Washington managed to tie up the game with a pair of pesky home runs from Danny Espinosa in the 6th and Adam LaRoche in the 7th. The Gnats' bats were on fire tonight, pulling off 16 hits, but leaving 30 on base and striking out 10 times; which would serve to keep the game tied at 3-3 and send us into extra baseball.

Here comes the wild stuff. Due to a groin injury in the 11th, Seth Smith had to leave the game, which left kind of a huge gap in left field. But that didn't really phase Buddy Black, because he knew exactly who we had ready on the bench - warmed up to fill in the role: Andrew Cashner. 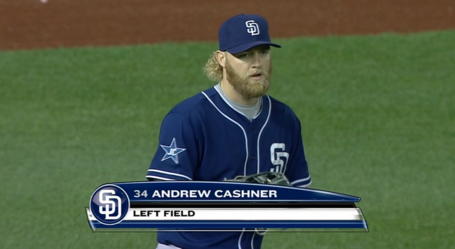 Ca$h threw on the longest glove he could find and took the field, setting up the opportunity for a late-night double switch which involved Tommy Medica and Alex Torres coming in after Tim Stauffer recorded the first out of the inning, a laserbeam line drive shot right back to the mound and snagged by Stauffer without effort. More can be found in the form of A GIF Story.

The power of the golden mullet flowed intensely through the crisp air of Nationals Park. Channeling the energy of those flowing locks, Xavier Nady popped a single up the middle in the 12th to score Jedd Gyorko, who was waiting very patiently at third base after having hit a solid single and stealing on a wild throw from Natty catcher Jose Lobaton.

Representing one of the top bullpens in the National League, Houston Street showed up to end the night for the ex-Expos. Giving up an early double to Bryce Harper, Street came back by striking out Tyler Moore. With Lobaton up to bat with one out and the tying run in scoring position, things got tense. That all flushed out the ballpark when a snappy line drive found its way into Everth Cabrera's leaping glove. This left Harper flatfooted and dead in the water, and Cabrera doubled him up with ease.

Today was a solid day of baseball. Stultsy threw for 5 innings, giving up 10 hits, 2 earned runs, and 1 home run. He didn't walk anybody and he struck out 3.

Bothered by a pair of injuries and standing up against a typically dominate pitcher by the name of Jordan Zimmerman, the Padres started the series the right way by giving the Friar faithful a fun game and a happy Thursday night's sleep.

Wrapping up, I'll leave you guys with a poll.