Share All sharing options for: A Taste of Petco Park: Food Preview

A week or so ago, we were invited to participate in a food preview called A Taste of Petco Park along with other Padres and food/beverage bloggers.  Jon was my platonic plus one because he likes to partake in the benefits of blogging without actually blogging himself.  We're also best buddies.

We had to arrive at 6pm which was a struggle due to downtown parking and a case of sciatica that has had me limping like I was an extra on The Walking Dead for more than a month.  At the gate we checked-in just in the nick of time and were given a badge, a bag and a list of activities that read more like a menu.

It turns out we didn't really have to be on time, the first event scheduled for us was watching the filming of the new Padres Social Hour show in Club 318 in the Padres Store.  We found it pretty difficult to be an audience member.  Mostly because it's almost impossible to hear what host Jesse Agler and his guest are talking about with the music being played in store itself, unless you're standing directly in front of the monitor, which we weren't.

How does #PadresSH talk socially about the Pads when "Stay" by Rhianna is blasting in the Padres store? pic.twitter.com/aQ02Sw0jFk

We instead wandered the store in search of overpriced Padres gear that'd we'd wear if we weren't opposed to paying exorbitant prices for such things.  We started playing a game of "Guess the Price" but grew bored so we went back and met up with the other bloggers and watched TV Darling RJ's Fro make an impromptu appearance on the show.  Afterward he pretended not to know us and kept refusing us his autograph. 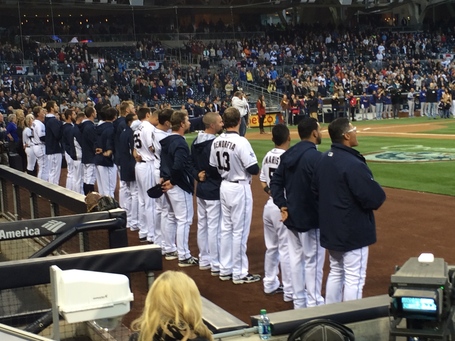 The tour started and we walked through a tunnel that led to seats on the right field line.  We had a row of seats reserved for us near the home dugout but on our way to them we walked out onto the field, did a u-turn and came back.  It was cool to be on the field during pre-game, but a little confusing as well.

Jon is really confused at how we ended up on the field. pic.twitter.com/mUUFXBmq6t

When we returned the 12 of us took turns rotating into 4 of the all-you-can-eat seats.  The service was slow so we ate up alot of innings and not much food.  I didn't eat in preparation for the night and by the 4th inning I was really hungry.  Finally my Italian Sausage came.

The sausage was really good, I graded it a 9/10 but my hunger was undoubtedly a factor in its high score.  Jon had the nachos, he wasn't impressed.

I still think that Phil's BBQ is probably the best food and best value at the ballpark.  They have two locations at Petco Park now.  The one on the first base side has fryers, so now french fries, onion rings and other assorted fried foods are available, unlike last year.

A Phil's employee brought us out a few assorted food items for us to taste and share.  I resisted eating at Phil's since it was practically all I ate at the ballpark last year.  I had to save room for new foods.  I've had the Chick Tickler more than a few times at Phil's restaurant and can assure you it's one of the best values you can get.

I need to pace myself. Jon gives Phil's 9/10. #PetcoParkFood pic.twitter.com/lB5QyMOfDG

My favorite thing to do at these events is to try and offer to feed other people from my leftovers.  I'll pick up a drink or sandwich and hold it in front of their mouth with my free hand beneath their chin to catch any crumbs.  It really creeps them out, as it should.  Only a psychopath would do such a thing. 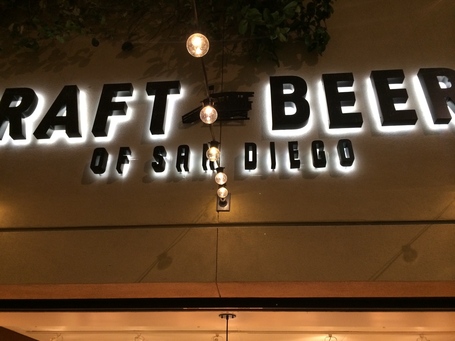 I really only drink to be sociable, and I'm rarely sociable, so I don't know anything about beer.  When we made it to the new Craft Beer stand I asked a beer aficionado to recommend a beer for me.  He told me everything was good, it all depended on my preferred taste.  I ended up choosing the Alesmith Nut Brown, since I thought the name was funny and I've been told by others that I like browns.  #BringBackTheBrown 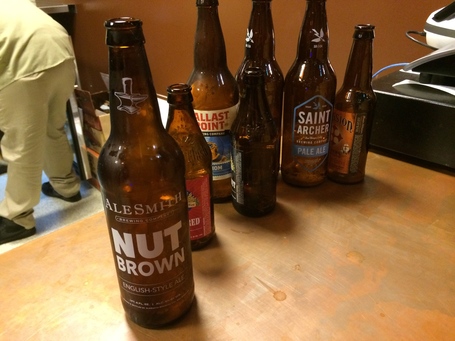 Craft Beer is a big thing in San Diego and our tour host VP Scott Marshall said that sales were up 400% so far at the stand.

Rick from RJ's Fro caught the rare sight of me bro'ing it up with the fellas.

I recognize the dainty hands & the puffy jacket, but is that a...beer? cc: @gaslampball pic.twitter.com/X3XKePjeey

I liked my beer but when I saw the opportunity to get fresh orange juice at the Seaside Market I tried to pawn it off on others with the warning that I had only taken a few sips but back-washed a ton. 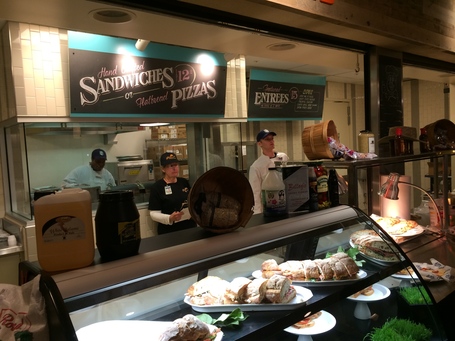 Having a market at the ballpark may seem like a weird idea at first, but I think it's going to be a big hit.  The lady folk I've talked to already love it for the healthy fare, like salads, gluten free choices, fruits and for many other food items that you wouldn't normally find in a ballpark.

You know you always hear that one of the best places to find a date is at a super market?  Move over Western Metal Supply Bar, Seaside Market is going to be the new place for swinging singles to congregate.  It's also a good place to go for "Cardiff Crack" which is what locals call the market's tri-tip. 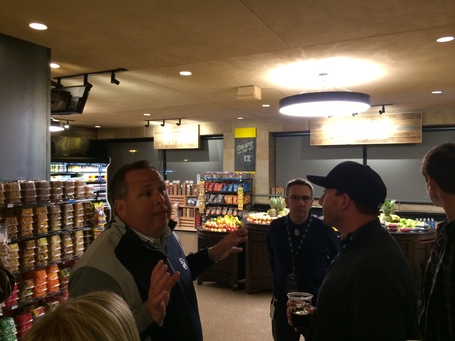 I saw that they even have shopping cards which seemed like over kill, but it turns out that they want you to picnic and take your food out to the Park at the Park.  I'll have to try pushing that cart to the outfield sometime to see if it's in fact as embarrassing as it sounds.

At this point, those of us on the tour, were being overloaded with information.  I couldn't keep up.  When I saw the fresh Orange Juice Machine it's all I could focus on.  These machines cost over $15,000 and as I said it's worth every penny.  Most machines punch a hole in the rind which gives the juice a bitter taste but this one cuts the oranges and it's nothing but sweetness.  All the oranges are local too.

I wonder what would happen if you put baseballs into the orange juicer machine. Probably would make Pure Joy Juice is my guess. 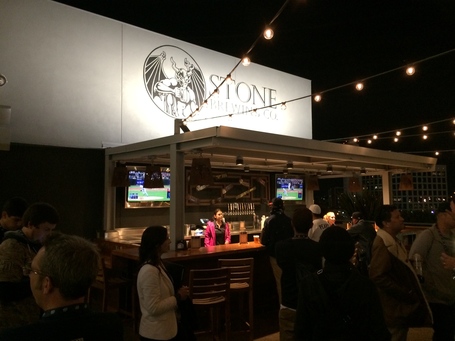 I knew that Petco Park had added a Stone Brewing but this tour was the first time I'd seen its location.  Near the entrance is their demon logo on the wall and a fountain nearby, which makes it look like the perfect place for a black baptism if you're a witch.

VP of Marketing Wayne Partello met up with the group here.  He's a very friendly guy and very enthusiastic about the upgrades.   We learned that all the construction for the $5 million in upgrades was completed in 3 weeks.  Pretty amazing when you see just how many things they've changed. 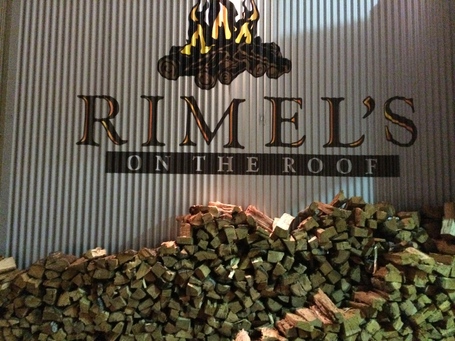 We're told that Rimel's at the ballpark is the only rooftop wood fire rotisserie in the world, or something like that.  As I said, the information was coming at us so quickly it was hard to digest.  I saw that woodpile and instead of thinking about the delicious smokey flavors, I thought of all the black widows that must be hiding inside. 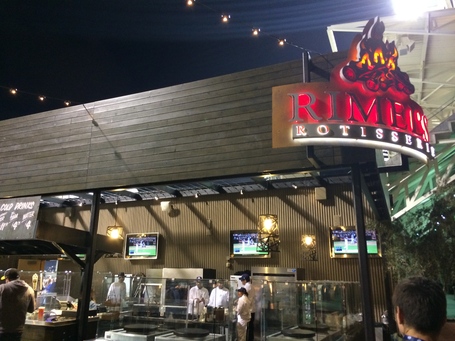 As we were told about all the delicacies being served we were brought Fish Tacos and told to smother them with their green sauce and that's what we did.  They were tasty but after sausage, BBQ, beer, orange juice and fish I had to take a breather.  I came back last Friday to try the Fish taco again with a cleansed pallet so that I could fully enjoy it.  I need to try some of their other menu items soon. 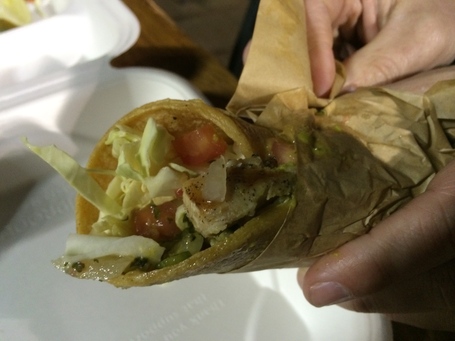 And in the end

We finished the tour by taking a quick peek at College Night up in the flag court.  I felt really out of place and kept having to tell kids I wasn't a narc.  Wayne said the tickets sold fast after 93.3 promoted the event and even at the end of the game there was still a good crowd.  Not really my scene but it takes all kinds.

Overall, the Taste of Petco Park was a cool event I'm really excited about all the new food options.  I was getting a little tired of eating the same few things for 30 nights out of the year.  I definitely need to enjoy the options at a slower pace though and figure out some of the better values.  I'll do that on my own throughout the season, after all this was only meant as a preview.

Afterwards when other fans/bloggers heard that we had been wined and dined by the Padres they questioned our objectivity, which I think is fair.  I'll comment on that subject in a later post, but here's the gist of it:

Padres Jagoff: Are the Padres Bloggers Shills for the Team?

I'm basically saying is yeah, if the Padres keep offering up free stuff, access, experiences and tickets to bloggers, it totally ruins their objectivity and in all likelihood will lead to more positive coverage and much more measured criticism.

@PadresJagoff buying approval or recognizing a method to tell a story to our fans? Either way we are all having fun.

So take all you've just read with a pinch of salt for now, I guess.