After parts of five seasons in the low minors, 2009 second-round pick Everett Williams has been cut loose by the Padres organization. The news was first reported by Mad Friars.

Like his first-round counterpart Donavan Tate, Williams missed a good deal of time due to injury and didn't develop as expected when he did make it onto the field. Coincidentally, the most serious of the injuries was the result of an outfield collision with Tate in 2011. Tate hobbled away with a bone bruise while Williams suffered a torn ACL and missed the season. Williams managed to stay healthy the majority of the next season, posting a career-high 397 at-bats, but produced a paltry slash line of .242/ .288/ .363 with 112 strikeouts for Lake Elsinore. He got the bump up to AA San Antonio last season, but posted an even lower OPS in just 89 games.

Williams is pictured here on his 2010 Topps Pro Debut card, number 72, from back when the sky was still the limit. 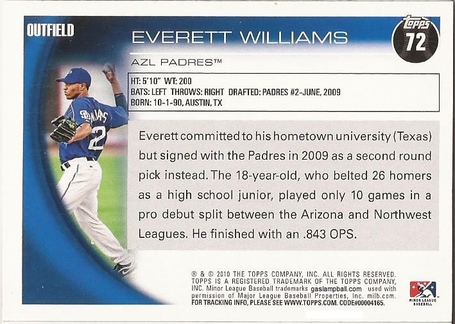 One thing that stands out to me on the back of this card is his date of birth. He's been kicking around the organization for so long that it's hard to believe he's still only 23 years old. There's still plenty of time for him to turn a corner and get his once-promising career back on track. It seems quite unlikely at this point but hey, stranger things have happened.