Share All sharing options for: Cool Padres Card: Jason Thompson and His Surfboard

Upper Deck had such great and offbeat photography back in the 1990s; this Jason Thompson card is a prime example. In a shot reminiscent of Tim Flannery's 1988 Fleer and Ryan Klesko's 1996 Pinnacle, Thompson is shown holding a surfboard. 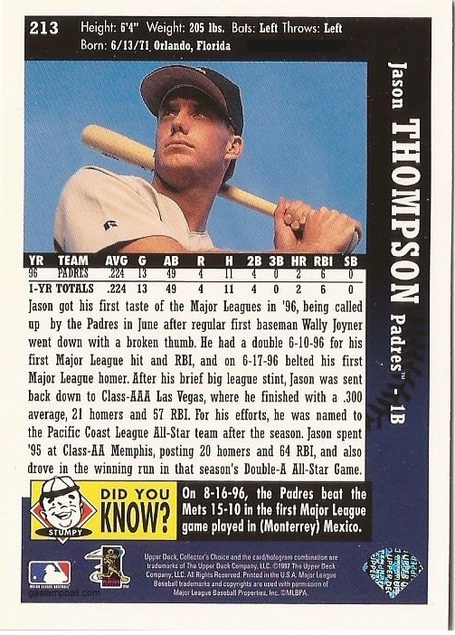 After being released by the Padres on January 7, 1997, Thompson signed with the Chiba Lotte Marines and spent one season in Japan. He had trouble getting on base and struck out nearly five times as much as he walked. Thompson came back to the states in '98. Well, one state in particular: Nevada. He signed back the Padres organization again and played 58 games at AAA Las Vegas. The hitting stroke he exhibited in his PCL All-Star season had seemingly abandoned him, and that's all she wrote.

Accordingly, that's all I wrote. Peace; I'm out.

*drops keyboard and walks off*