It does not feel like Josh Bard should be 36 years old already, and it definitely doesn't feel like these cards have been around for five years. Life goes by so fast. One day you're pulling someone's card from a pack, and before you know it a half-decade has passed and he's out of baseball.

Although he's pictured as a Padre, Bard had already moved on to D.C. by the time these hit the shelves. I'm not sure what shelf the one on the left came from, but the one on the right definitely came from Target. It's not something you'd catch on a glance, but check out the Topps logo in the upper-right-hand corner. See how it's the old-timey logo they haven't used since 1981? That designates it as a Target-only "Throwback" variation. The difference is less subtle when you flip the cards over, as the Throwback cards are printed on clearly inferior cardstock. It's grainy, grey, and a flashback in and of itself since the backs of Topps base cards haven't been this shoddy since 1991. As a whole, they look better than the black bordered cards that Walmart got as their exclusives that year, but that isn't saying much. 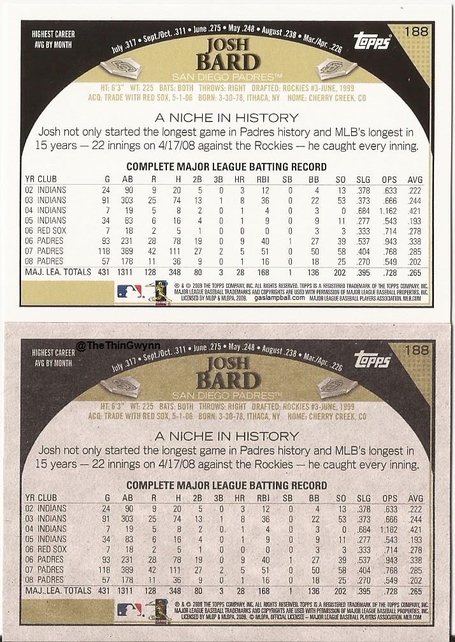 See, doesn't that look like trash? Speaking of trash, I forgot to watermark the front of these cards, so I fully expect to see them in 365 days as some lazy sack of garbage snatches them off Google Images to wish "a happy birthday to Josh Bard" on the Facebook page for their crappy blog. Get your own pictures or don't use one at all. I guess it doesn't really matter, but it just irritates me when other people take shortcuts while I play by the rules of common sense and decency. I take solace in knowing that no amount of corner-cutting the Manny Alexanders of the world do, they're still Manny Alexander at the end of the day.