We know by know of course, that there is something magical about the Sisterhood of the Travelling Jersey. Apparently not magical enough for me to write this post quickly (I’ve had too many baseballs in the air), or for Donovan Tate to cease being broken, but a magic whereby even talking, reading or thinking about it feels special, let alone actually having the privilege to touch it, and then put it on.

What is less discussed, however, is that the glorious high associated with the once replaceable, now irreplaceable, Dave Staton Jersey, comes with a cost. ‘Of course’ I can hear you say - you keepers of the one true baseball faith - this Jersey relates to our Padres, and nothing comes easy with them. In this case, one of the costs is enduring the wait as you eagerly hope for the Jersey to arrive each day, while trying to keep at bay the fears of just what might happen to it as it traverses through our various weird and wonderful postal systems.

This tale begins with me in my hometown of Melbourne, Australia, waiting somewhat nervously in the week that began on Monday August 12, 2013. The wait had an extra element of tension due to the fact I needed the Jersey to arrive before the weekend if I was going to be able to take it to see the mighty Western Bulldogs play a game of Australian Rules football (otherwise known as Aussie/Ozi Rules, football, or most simply as the footy). {If you don’t know this game, arguably the most chaotic, spectacular and beautiful of the world’s football codes, you can see highlight clips on youtube such as this one here}

The Jersey was due to arrive around Wednesday. Monday and Tuesday therefore passed in a blur of low expectations, but time began to slow down on Wednesday, and crawled through Thursday with no relief from the local postal staff. Friday was dominated by the question as to whether the Jersey would arrive in time. Arriving home in the early evening I scanned the porch anxiously. My heart raced as I saw first one large package, then another. To my delight I saw that I’d been doubly blessed. For not only had the Travelling Jersey finally arrived, so too had the final proofs of the book I’d been writing for the past 18 months {for those interested this is the book}. Perhaps I lead a sheltered life, but nevertheless, it remains for me the greatest postal day evah! 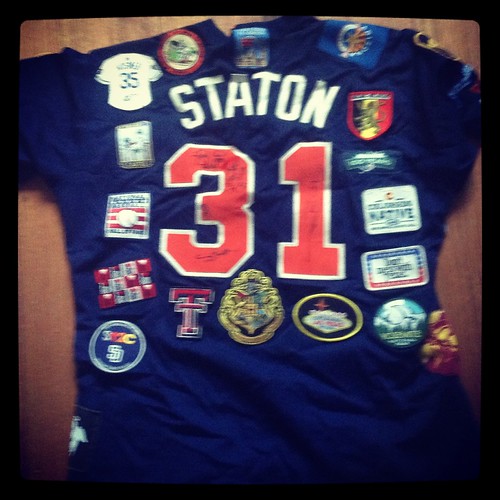 The Jersey on arrival 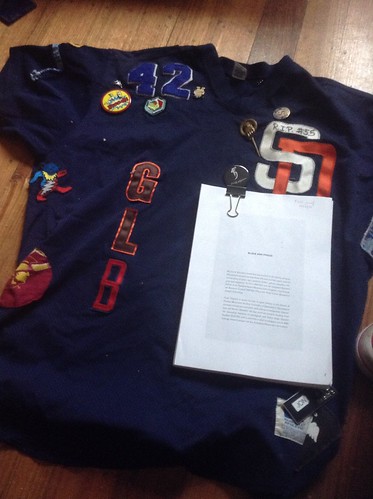 Jersey plus proofs of the new book

After a day of letting the Jersey relax in the Australian air and sunshine, it was time to take it to the footy. And not just to any game. For this was the last time my kids and I were going to get to be at the ground to see Western Bulldogs play for 18 months,

It’s worth taking a moment here, to introduce unfamiliar readers to the glorious Bulldogs. In essence, they’re a lot like the Padres - a small club battling against the odds who have generally failed to win the ultimate prize (although they did back in 1954, a mere 21 years or so before I emerged from the womb, crying whilst still keeping the faith). Based in the West of Melbourne, they’re supported by a smallish group of long-suffering fans all-too-well versed in the joys, pains and humour to be found in supporting the greatest team in the competition that just happens to be stringing out the journey to the promised land for reasons that are not completely clear, but which hopefully relates to the fact that the ecstasy of that day - when it finally comes - will far exceed that experienced by supporters of the false faiths of our various bitter rivals (you know, like the abominable Seattle Mariners).

A Bulldogs match felt like a most appropriate place for the Jersey to visit and bless with its presence. The Dogs were coming to the end of a Padres-esque season. After a moment or two of hope, the first half of the year had been dismal. Then, once the playoffs became impossible, they started playing well, ruining seasons for contending teams now that their own season was ruined.

It was the third-last round of the regular season. And the match was against the hated Adelaide Crows, who in 1997, with something akin to game 163 broke the hearts of the Bulldog faithful with an awful, traumatic - and needless to say illegitimate - come from behind victory that remains the site of horrific flashbacks to this day. In August 2013 Adelaide looked like it was on the way to the playoffs, while the Bulldogs were playing for pride.

I was at the game with my two daughters and my trusty fellow sufferers, Jim and Paul. 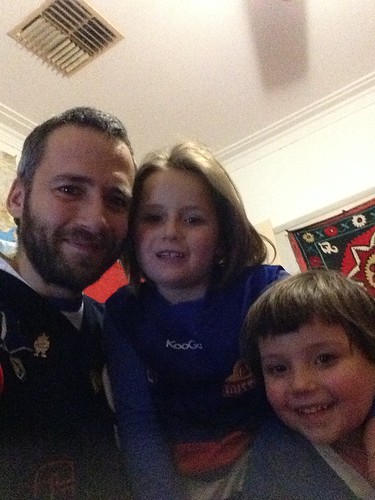 About to head to the game 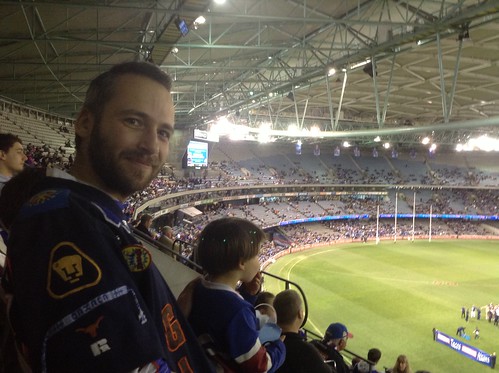 The Jersey surveys the ground 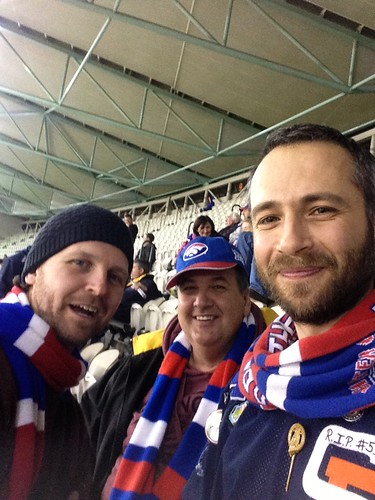 Australian Rules football is a game of four quarters where the score is advanced by goals that are scored significantly more frequently than those in soccer or even touchdowns in American football, but much less regularly than in sports like basketball. If you kick 16 goals you will generally win.

Now a decade or so ago, the Bulldogs had initiated a cheer to celebrate each goal that was kicked. In essence, a loud voice from the scoreboard would shout ‘Doggie, Doggie, DOGGIE’, and then the crowd would follow with ‘Woof, Woof, WOOF’, followed by ‘Doggie’ from the scoreboard, ‘Woof’ from the crowd, another ‘Doggie’, ‘Woof’, and then ending with a rousing ‘Doggie, Doggie, DOGGIE’, ‘Woof, Woof, WOOF’. It lasted for two glorious years, and then the league banned it for some silly, albeit typical, killjoy over-reaction that occurs throughout the sporting world.

In 2012, the year before the Jersey made the fateful trip to Australia, the Bulldogs had such a dismal season that I felt compelled to bring the chant back to life. As GLB members know well, sometimes you have to create your own fan culture to help survive defeat after crushing defeat. And there was something wonderfully life-giving about screaming out ‘Doggie, Doggie, DOGGIE’, ‘Woof, Woof, WOOF’ in celebration when your team scored a goal that meant they were likely to only lose by the equivalent of 8 runs instead of 10. Each game I’d start the chant, and slowly people in the nearby crowd would join in, and I continued it throughout 2013.

The Staton Jersey in attendance helped inspire both the Bulldogs and the ‘Doggie/Woof’ celebrations. But nothing is ever easy with the Bulldogs either. After the Dogs dominating early, the foul Crows began clawing their way back into the game, and after three quarters had taken the lead. We kept the faith however, and were rewarded with an intoxicating final quarter where the Bulldogs came back to snatch victory in the last ten minutes. After the Bulldogs kicked the winning goal I recorded the last ‘Doggie/Woof’ call that I’d make until 2015.

You can listen to it here: The final call

A few days after the Jersey had facilitated this grand triumph, it was time to take it to one of the world’s great sporting stadiums, the Melbourne Cricket Ground. Melbourne is known as Australia’s sporting capital - we have the Australian Open (Tennis), the Australian Grand Prix, 9-10 of the 18 teams in the Australian (Rules) Football League (the tenth team, Geelong, is about one hours drive from Melbourne), the Grand Final (Super Bowl equivalent) every year, a horse race called the Melbourne cup which is an official public holiday, the biggest test cricket match of the year, and a host of other things. And the Melbourne Cricket Ground is a jewel in the crown, able to hold around 100,000 spectators. It also hosts the (Australian) National Sports Museum, so I naturally took the Jersey around there as well (although unfortunately my picture of it next to the tiny baseball display didn’t work out).

Of course, there was a need to create a permanent reminder of the Jersey’s time in Melbourne. For some silly reason, we no longer have the tradition of being able to buy sow-on badges, so I bought a Western Bulldogs top with a nice badge, then unpicked the thread of the badge and sowed it onto the Jersey.

Next it was time to take the Jersey back overseas. For those of you who don’t know me, I’ve been lucky enough to stumble into one of the greatest jobs possible - that of being a sports historian. (The reason why I wouldn’t be attending Western Bulldogs matches was because I’d somehow managed to get funding to spend the first half of 2014 in Manchester and the second half in Boston in order to study the emergence of mad sport fans in the late 1800s.) And in September 2013 I flew over to Manchester to go to a conference celebrating 150 years since the formation of the English Football Association (who run the FA Cup).

It seemed another perfect thing to take the Jersey to. Though I was a bit nervous of taking the Jersey on the plane with me - it has a lot of sharp pins on it, but fortunately security didn’t seem too concerned (although I had liked the idea of explaining the top to them).

If you haven’t been to Manchester it’s worth adding it to your bucket list. It’s a wonderfully dynamic city which is always bustling and full of energy regardless of the weather. Although I hold no love for either of the two big soccer teams, it’s a place where people tend to wear their sports gear with pride, and the Staton Jersey fitted right in.

The conference was being held at the (English) National Football Museum, and so once again the Jersey and I got to indulge in our love of sports history. 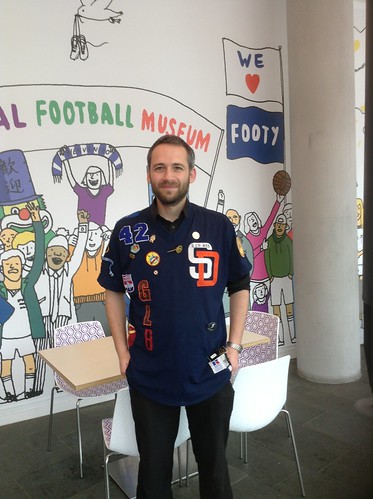 At the National Football Museum


I had a picture taken of me with it in front of my favourite sports painting. It’s by the Mancunian artist Michael Browne and based on Piero della Francesca's famous painting of the Resurrection of Christ: 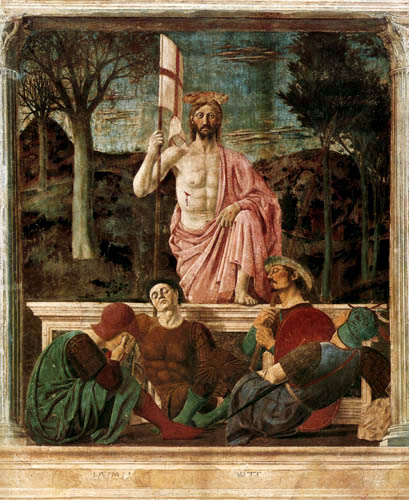 via reproarte.com
Even though I’m no fan of Manchester United, I adore the way it points to the absurd meaning and faith that sports create for so many of us. And it felt right to have the sacred Jersey in front of it. 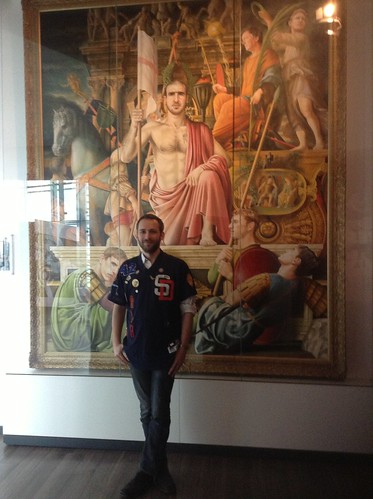 Michael Browne's The Art of the Game

An ‘I love Manchester’ pin along with one from the ‘National Football Museum’, and it was time to send the Jersey on it’s way. 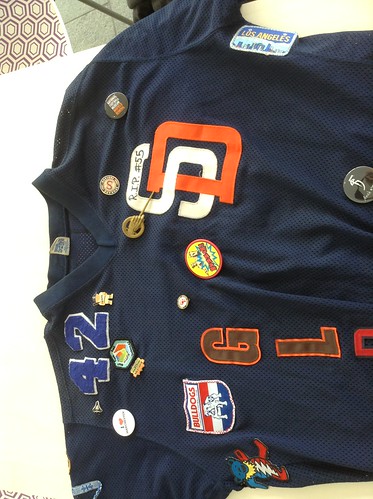 And this is another cost entailed in being privileged to have the Jersey for a short time. Because as soon as you send it on, you feel the loss of it. Of course I feel connected to it still, and to all who have borne it, and will come to bear it in the future. And on the eve of what will surely be a glorious 2014 Padres season, I look forward to reading its further adventures.