Watching #SDLive get made at the FSSD studios

Hey Dudes, I wrote this blog post on March 20th about our trip to see #SDLive get made on the 19th. I wanted to wait to publish the post until I saw the finished product on TV which, due to our Spring Training trip and a crippling case of sciatica, didn't happen until tonight the 27th. Read it as you imagine yourself from a week ago and then return to real time after the row of asterisks towards the end.

Share All sharing options for: Watching #SDLive get made at the FSSD studios

You know what I found out last night?  Fox Sports San Diego's show #SDLive is neither live nor shot in SD.  Okay well it is shot in San Diego, but that view of downtown at dusk in the studio background, that's what they call a "matte painting" in the TV business, it's not real.

@gaslampball Next time we have a LIVE studio audience, I will make sure you're there!!!!

That tweet from Brook, that's how it all started. Sometimes you whine on your blog about how you don't get invited to be in a studio audience and suddenly you're invited to be part of a studio audience.  That's how Jonny and I ended up at the Fox Sports San Diego studios last night while they filmed this week's episode of #SDLive.

I hadn't been inside the revamped Channel 4 offices and studios since FSSD took over.  I was really looking forward to it. I was telling Jon that I'm a very curious and inquisitive person and I like to see how things are made, except for hot dogs. I saw that the other day and I wish I hadn't.  I said aloud that I hoped making #SDLive was nothing like the processing meat byproducts but secretly in my heart of hearts I wish it was.

As we approached the building we saw the show's featured band packing up their equipment on the street.  "That's weird", I said, "the band usually plays at the end of the show".  About the same time Jon said he had tried to record the show just in case they did a shot of the studio audience, but he didn't see the show on FSSD's schedule.  As it turned out there was no studio audience, it was just us and furthermore #SDLive is not a live show and doesn't air until tonight.  I think I annoyed a few all the FSSD employees by asking over and over, "So let me get this straight, this isn't live -- like at all?"  I suggested name changes in an effort to be helpful

"What about SD Sports at Night!#?" I explained that "Night" could be written in neon font or spelled with a "K" at the beginning.  "Why would the hashtag be at the end?" FSSD employees grumbled as they rolled their eyes, "and why 'Knight'? It doesn't make any sense."  I explained that I'm just an idea man and there's no such thing as a bad idea when you're in a brainstorming session.  They explained that we weren't in a brainstorming session and they weren't going to change the name. I surrendered with a muted "harrumph".

In any case we got to meet new host of #SDLive Brook Roberts.  Mike Pomeranz will be busy with baseball from now on so she'll be the main host going forward.  She's real nice.   I used to watch her when she was a contestant on The Amazing Race and I told her so.  We both agreed that this current All-Star season kind of sucks.   Afterwards Jon and I wondered how she kept such a cool raspy voice throughout the whole show.  We agreed that menthol cigarettes must be the answer, they always are.

Padre Cy Young winner Randy Jones was one of the two guests on the show.  Mike Cage was the other, he's a former Aztec and Clippers basketball player.  We met them briefly before they went out on stage.  Then we watched them on set from the green room and monitored their performance on a row of monitors.  When Mike was shooting his segment alone, Randy came back to collect his jacket.  I urged him to try on Mike's jacket and pose for a photo, which he was happy to do. 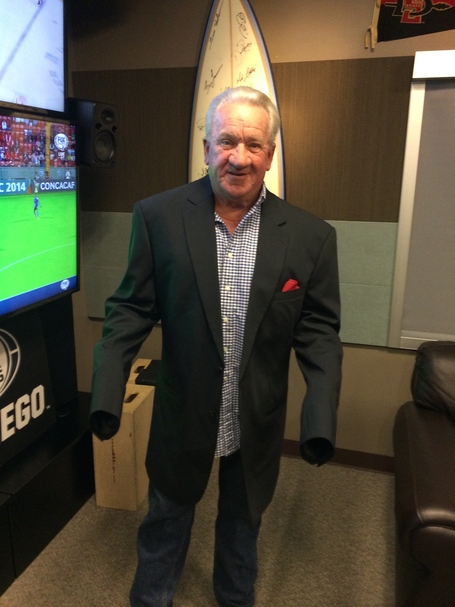 Then we all tried it on, don't tell Mike.

The director dropped in on us several times during the shoot and explained that he thinks of himself as a perfectionist which is why he needed to re-shoot a few segments.  It seemed like an effort to preemptively defend against any criticism of the reshoots. The show isn't live, like the name would lead you to believe but the idea is that the second takes make it a better show in the end.  After watching the finished product tonight, it's hard to argue that it turned out well, but I think you do sacrifice some spontaneity for more technically perfect segments.

#SDLive's weekly success rests largly on the guests.  I've seen both good and bad episodes at home. We were lucky to have dropped in on a really good show, which focused primarily on the Padres and Aztecs.  It was right in my wheelhouse.  You also can't go wrong when you've got two former athletes that have decades worth of TV experience as your guests.  They're both so professional that very few of the questions and answers needed to be tweaked.

I'm sometimes critical of the show, but the criticism comes from a place of love.  I've made it a weekly habit to tune in to SD Sports Knight# #SDLive and I want to see it succeed.  I really appreciate FSSD for giving us a behind-the-scenes look at the production.