Scott Sanders is best remembered by some (myself included) as the guy whose jersey Tony Gwynn once wore in a spring training game, but since today is his forty-fifth birthday he deserves to have his jersey displayed with him in it.

Sanders is pictured here on his 1996 Fleer card, number 578. Fleer's 1996 set is a 180-degree departure from their psychedelic 1995 set. The cards have a matte finish on a thick stock with the player and team names presented in a no-nonsense font printed with tasteful gold foil. 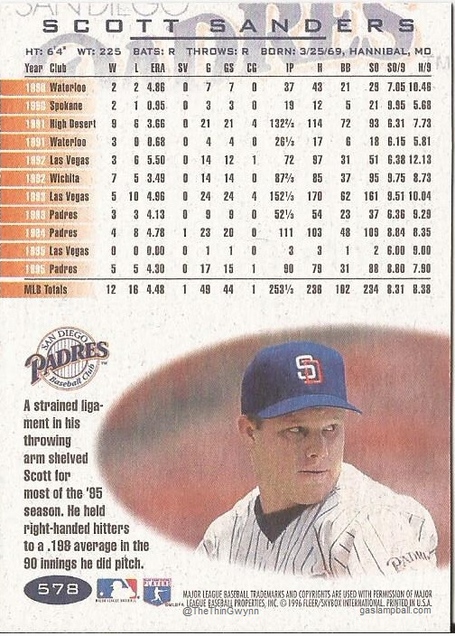 The year this came out would prove to be Scott's best big league season. Sanders pitched a career-high 144 innings over 16 starts and 30 relief appearances in 1996. His 3.38 ERA and 157 strikeouts were also high-water marks, as was his 9.8 K/9 rate. He was traded to Seattle for Sterling Hitchcock after the season, but came back to San Diego a month into the 1998 season. With his familiar number 27 taken by Kevin Brown, Sanders was issued 26 and went 3-1 with a 4.11 ERA in 23 relief appearances for the National League champions.

After an unsuccessful 1999 with the Cubs, Sanders spent 2000 in AAA with four organizations. He made it back to the majors for one last start that year... sort of. The game got rained out, so the four earned runs he surrendered in less than two innings never officially happened.

Sanders retired with a 34-45 record in seven major league seasons, but was 24-22 in his five seasons with the Padres. He was also a member of two division-winners, one in each stint in San Diego. Not a bad legacy to leave behind. Between that and helping out Tony The Gwynn in his time of need, he's borderline legendary. To some of us, at least.