Cameron Maybin apparently hurt his shoulder diving for a ball in Sunday's split squad game against the Dodgers. He'll undergo an MRI on Monday to see the extent of the injury.

In today's split squad game against the Dodgers, Cameron Maybin made a diving catch in right center field to rob Juan Uribe of at least a double. His collision with the ground ended up with a hurt upper arm / shoulder.

Following the dive, he was rubbing his bicep/shoulder and looked to be in some pain but walked it off initially and stayed in the game.

The issue kept bothering him, however, and an inning later it looked to be reaggravated when Maybin ran after a grounder in center field. He grabbed and held his bicep and grimaced in obvious pain. Ryan Jackson, who was playing shortstop at the time, called for the trainer, who came out to the field to check on Maybin and eventually take him into the clubhouse for further evaluation.

In Glendale: Cameron Maybin leaves the game in the bottom of the 5th with an apparent injury to his left arm. #PadresST

Maybin's diving catch, as the Dodgers announcer put it, "[made] the routine look spectacular." This is probably because of the length he had to run to get to the ball. Both he and right fielder Rymer Liriano were running for it, but Liriano stopped short and Maybin had to make the dive in order to save the play. Many fans were blaming Liriano for not making the effort to get the ball when he should have, but if I was a prospect like him and I saw a guy like Maybin running towards me for the same ball I would have stopped too and let him have it. Though maybe that's just one of several reasons I'm not a professional baseball player.

[Note by jodes0405, 03/02/14 7:40 PM PST ] It's come to my attention that Maybin actually called off Liriano, which just makes this all worse, on the parts of both of Maybin for doing that and the people who were blaming Liriano.

Chris Denorfia and the volatile Padres 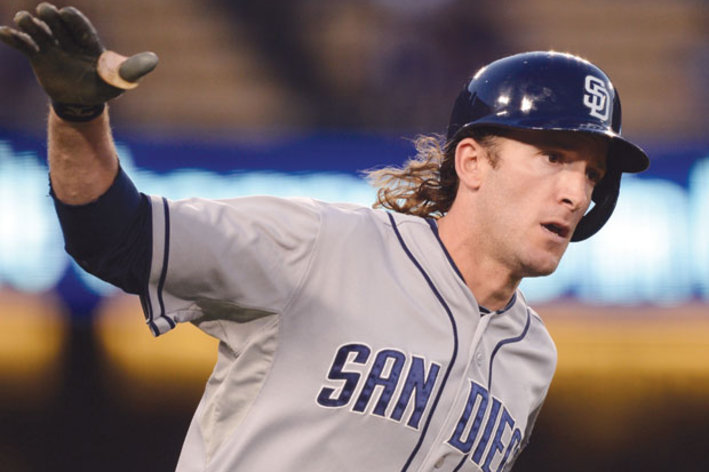 The Padres have the talent to contend for a playoff spot. What could happen if they stay healthy?

As we've now learned through several sources on Twitter, Maybin will undergo an MRI tomorrow. We've already lost Cory Luebke for the season to Tommy John: Part 2 and both Chase Headley's calf strain and Max Fried's sore elbow are sidelining them for a few weeks. After losing Maybin for much of the 2013 season (due in part to another diving catch gone bad), this would be an awful blow for him and the team, so let's all cross our fingers that it isn't something serious again. Although, as our friends at Beyond the Box Score put it earlier today, the Padres are a volatile team, and injuries seem to be our bane. For now all we can do is wait and hope that our Friars can catch a break this time and Maybin won't have to miss any serious playing time.