It was a beautiful, fun-filled celebration down at Petco Park on Saturday as fans primed themselves for the 2014 season at Padres FanFest.

Share All sharing options for: Padres FanFest 2014: a recap of Saturday's FANtastic FESTivities

I was really, ridiculously excited to head down to Petco Park yesterday. I wasn't able to make it in 2013 so it had been two years since my last FanFest and the anticipation was killing me. Thanks to the awesome and talented PadresJagoff and fellow GLBlogger Darklighter I was able to get in with the Padres members / season ticket holders at 8:30am. As I was driving down 10th Avenue around 8:15, I saw that the line to get into FanFest had already reached the corner of 10th and Park Blvd. I ran into Jonny Dub (and his adorable son) in the parking lot almost immediately after getting out of my car and we both made our ways toward the ballpark.

I went to meet Darklighter to get my early entry pass from him and saw that he was in line with PadresPublic bloggers AvengingJM and hs619. We exchanged pleasantries and high fives before I left to make my way ,with Jonny Dub, to the back of the line, which had grown considerably since I drove by and was now all the way back near the East Village Gate. There we waited and were soon met by jbox, who was already so impatient to get inside even though he had just gotten there. He kept jokingly chanting "O-pen the gates!" even though the gates were already open. One security guard laughed, so I guess it was worth it.

We finally got inside the gate and I spotted matthewverygood waiting for an autograph voucher, so I went over and said hi. I snagged my own voucher for the Will Venable / Tim Stauffer autograph session that I was super excited for, then Jonny Dub and jbox headed over to take the clubhouse tour or something, while I made my way to the Padres Garage Sale to meet up with CurbEnthusiasm. While there, I also ran into more PadresPublic bloggers, SDPads_1 and Melvin Nieves; Steve Adler of Friarhood fame; and awesome Twitter peeps RedTheTrucker and FriarDanny. The garage sale left a lot to be desired and the lines were crazy long, but I did walk away with a few goodies so it wasn't a total loss.

So the Padres garage sale was a relative bust, but I did still pick up some cool stuff. #SDFanFest #youmaysenseatheme pic.twitter.com/eRjyiUq3Yz

Up next was the much-anticipated (by my standards) VenaStauff autograph session, so CE and I headed over to section 117 to wait. Darklighter soon came over as well and sat in front of us and we chatted in the blistering cold while waiting our turn. I was super nervous and psyching myself out the entire time.

Bout to meet them. I'm so nervous. WHAT DO I SAY?? #SDFanFest

As we waited, we also got to hear over the PA some of the finalists for the PA Announcer gig. I don't know how many finalists there were altogether but I heard six of them, two of which were women. They all recited the same player announcement, I suppose to make it easier for us to compare them. I noticed that they varied in their pronunciations of "Everth" (Ev-erth/Ev-er-eth/Ev-reth) but they all made great efforts to get the accent right when saying "Cabrera." Unfortunately this resulted in many of them sounding unnatural, like they were trying too hard. None of them really stood out very much to me. Voting for the gig will take place online sometime soon, and I'm assuming/hoping they'll have video/audio of each finalist for people to vote for and aren't just relying on those of us at FanFest to remember our favorites. 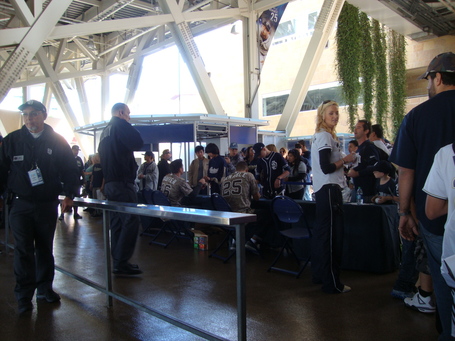 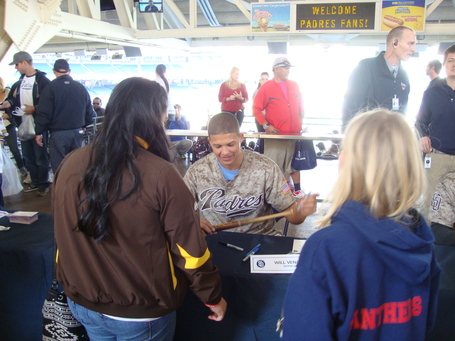 I got a mini bat signed by Venable and a baseball signed by Stauffer. 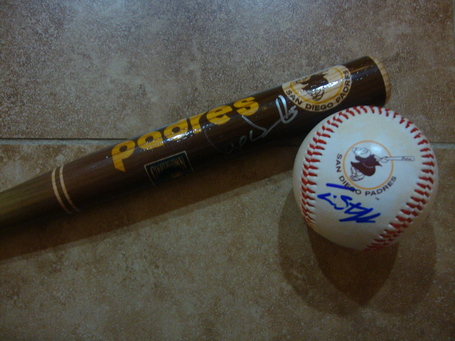 We had seen earlier that Josh Johnson and Tommy Medica had arrived early for their own autograph session, which was set to take place an hour after VenaStauff's, and were taking the time to meet with fans, sign autographs, and take pictures while they waited for their turn. 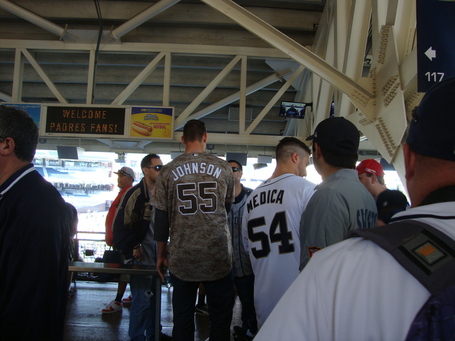 I was able to snap a picture with Medica, who was sporting a fresh cut, but missed my opportunity to take one with JJ. 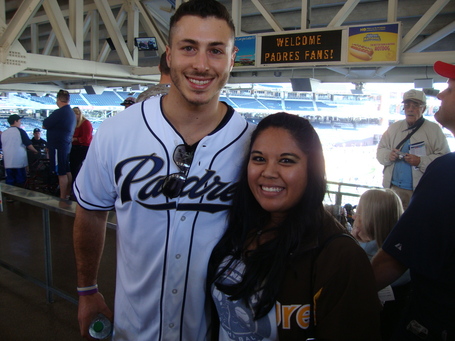 From there, we headed towards the third base side of the concourse and then made our way down to the field. Walking around the outfield is always one of my favorite parts of FanFest. There were still remnants of the tennis court from the Davis Cup that took place last month, so the grass wasn't its usual brilliant green perfection, but it was still fun to hang out and people-watch on the field.

After that, we went on a quest to find jbox and Jonny Dub again. Jbox informed me he was watching the Team Awards presentation that was taking place so we began to make our way to the stands behind the home dugout. As fate would have it, along the way we spotted Bob Scanlan hanging out in the concourse and talking to some fans. A while back, TheThinGwynn sent me a bunch of baseball cards, one of which was a Scanlan card from when he pitched for the Cubs. I happened to bring the card with me to FanFest hoping I would run into the Scanman, and there he was! I shyly walked up and asked him to sign my card and he happily obliged. I tried not to stare at his hair the whole time, but it was next to impossible. He was also kind enough to take a picture with me, so it was really an exciting moment.

So stoked I finally got to meet @heyscan today & have him sign this card I got from @TheThinGwynn! #SDFanFest pic.twitter.com/soL0iu3cT5 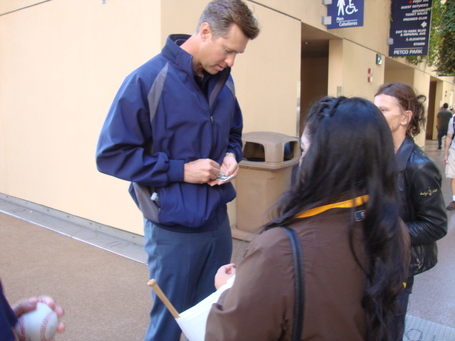 He even bent down to my level. He was practically on his knees. That guy is a tall drink of water. 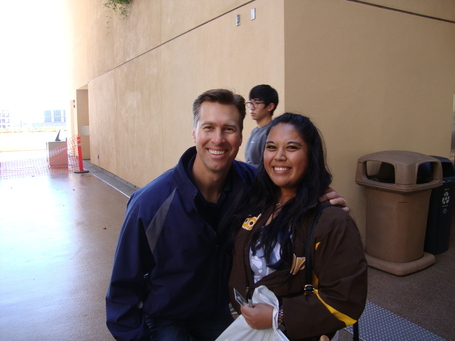 I thanked Scan and then we continued to make our way to meet jbox. When we got there, jbox informed us that Jonny Dub had already left. Jbox totally didn't seem bitter about it at all. The presentation was almost over, but Buddy Black and the players (Jedd Gyorko, Huston Street, Andrew Cashner, and Venable) were taking questions from fans, and then Ted Leitner, who was moderating, started a "Beat LA!" chant to close it out. 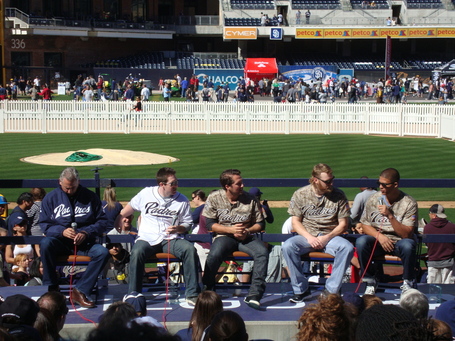 Cash is rockin' a pretty sweet mullet these days. Also, I really regret not bringing my duck call to FanFest. 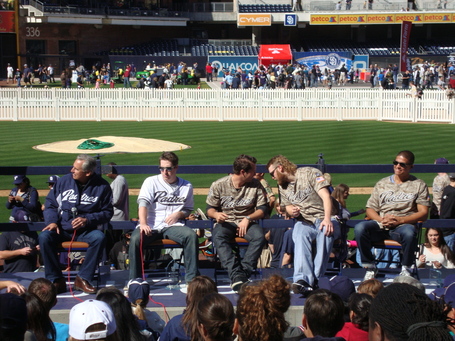 After the awards presentation, we all headed out the gate and across the street for lunch at Lolita's. When we re-entered the park, we were joined by former Pad Squad member, Andre, for a bit before heading back to the stands for the Ownership Forum, which was moderated by Dick Enberg and featured Peter Seidler, Ron Fowler, and Mike Dee. Friar Fever and Axion joined us in the stands for a few minutes and then left. Jbox tweeted and blogged a bunch about the forum and FF wrote about it in his FanFest writeup, so you can read more about what ownership had to say from them.

READ WHAT OWNERSHIP HAD TO SAY ABOUT:
an All Star Game at Petco Park Enberg's broadcast schedule ballpark improvements 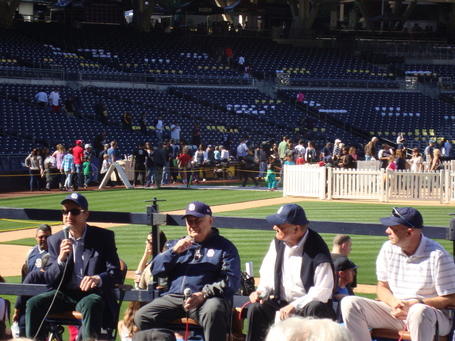 Next, we made our way across the field to the Social Media Lounge, aka Club 336, to see if any Padres players would show up, as they had been doing every hour on the hour throughout the day. No one was there yet when we got there so I went to walk around the Padres store, to which jbox responded, "Okay, you go look at some crap while I wait for some Padres."

As I was walking around the store, I noticed they were playing club music and there was a strobe light. I looked up and saw that they had a DJ spinning. I thought that was weird. 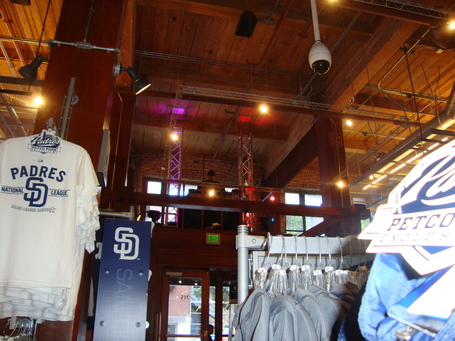 I found a pretty sweet glass cup with the Padres military logo that was on sale and knew I had to have it, so I went to pay for it. While I was in line, I saw that Nick Vincent and Randy Jones had arrived at the lounge. But by the time I paid for my stuff and got back there they had already left. One point for jbox. Friar Fever had come to join us again at the lounge and then SoulSD made a quick appearance. Soon Mike Dee and Wayne Partello walked in the door and came over to introduce themselves to us and chat for a bit. I wondered if Partello was a little bummed that he wasn't the one up in the rafters spinning records or if he was perfectly fine leaving the DJ life behind. Jbox then remarked to Mike Dee that we were "gettin' social" so that was my cue to leave.

It was a beautiful, fun-filled day at the ballpark and I had a great time seeing so many of my fellow Padres fans that I haven't seen since last season. It all made me even that much more excited for Spring Training and for the upcoming season, aka the season in which we win our first World Series. PADRES IN 2014! KTF!