FanFest is just two days away so let's take a look at what the Padres have in store for us.

Share All sharing options for: Padres FanFest 2014 Activities and Autographs

Last Thursday the Padres announced some details about FanFest, such as what activities are scheduled, how the parking situation is going to work, and how to register for early access.

#SDFanFest details have been announced! Here's your first chance to get early access vouchers. DETAILS: http://t.co/YVYP0Bs7RW

It looks like mostly the same old stuff (which is good I suppose): garage sale; opportunities to run the bases, catch balls in center field, and pitch in the bullpen; clubhouse tours; autograph sessions; etc.

But there was still a significant amount of information missing. Luckily, jbox was on the case.

Every day this week I kept an eye on Twitter and went back to the FanFest website to see if the autograph schedule had been released. Finally, yesterday afternoon the Padres delivered.

Or did they? No Chase Headley? No prospects*? No alumni other than Eric Owens? Don't get me wrong, I'm excited as all get out for that Venable/Stauffer autograph sesh. Seriously, that is probably the one I'm looking forward to most. But I know a lot of people were hoping to see Headley and maybe a guy like Hunter Renfroe, Austin Hedges, or Max Fried. And could they really not get anyone else to be an alumnus along with Eric Owens? Did you know that guy is a hitting coordinator for the DODGERS? It would've been cool to maybe see a player or two from the 1984 team for the 30th Anniversary of their NL Championship Title. What has Steve Garvey done for us lately?

Oh well. There are still a lot of players in that schedule I'd love to meet and get a picture with or autograph from.

Wait. What? Correct me if I'm misunderstanding, but you're only allowed to get a voucher for ONE autograph session? And if you want to TRY to get a second one you have to exit the park and re-enter? I couldn't go to FanFest last year and I didn't get any autographs in 2012, but I know in 2011 you could get vouchers for as many autograph sessions as you wanted. This seems like such a stingy policy. A lot of fans look forward to this event because you get to meet so many players in one place at the same time, but this is basically saying you have to choose the two players you want to meet most and just forget about everyone else. If your two favorite players are signing in separate sessions, even if they're at different times, you have to go through the time and trouble of leaving the ballpark and getting back in line to try to score a second voucher. Seriously, someone please tell me I'm reading this wrong because I can't understand why they'd do this.

You'll also notice that there will be hitting and pitching clinics by Yonder Alonso and Tyson Ross, respectively. Learning to pitch from Tyson Ross? Sign me up. I'm all over that. I don't know if Yonder Alonso would be my first choice to host a hitting clinic, but that's cool too.

In addition, there will be forums centered around Padres leadership, ownership, and players, as well as an Awards Presentation. 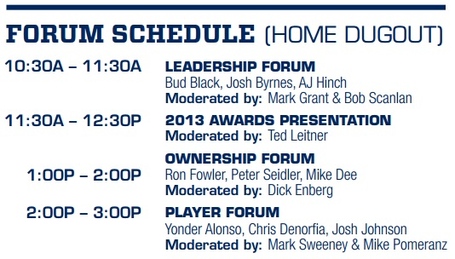 You can check out the rest of the details at padres.com/fanfest or print out this flyer to keep handy.