Is Kris Budden the final piece missing in the Fox Sports San Diego puzzle? Well I guess if we've come this far with my crazy theories, what's one more? Rumor has it that Fox Sports San Diego is doing away with their show Padres Weekly and will have two reporters for games and one host for pre-game and Padres POV. Three new employees in total.

Now that brings us to Kris Budden who as a current NFL sideline reporter looks like she'll have the most sports experience of the three, unless you count The Amazing Race as a sport, like I do.

Take a look at her twitter follows. Seemingly out of nowhere she took an interest in the Padres a few weeks back. Coincidence? Maybe, maybe not. 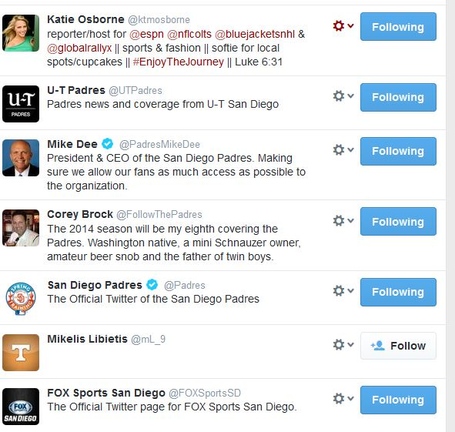 Then last Friday Kris meets up with our other suspected reporter Katie Osborne. And she hopes to see her again soon? IN SAN DIEGO WHILE THEY WORK TOGETHER COVERING THE PADRES FOR FSSD??? It's all there right between the lines. OMG.

@ktmosborne you too ! Hopefully I'll be seeing you soon!

I have a feeling we'll be seeing a lot of all three of these new reporters when we tune into Padres games this season. Then at the end of the season we'll never see any of them again as they move to different networks.

Are these the new Fox Sports San Diego reporters?