This appears to have slipped through the cracks with all the other news and excitement around Fanfest earlier this month, but it appears the schedule has been rearranged for the final 4 days of spring training thanks to the change in date for opening day. The exhibition game against Mexico City has been canceled. And the two games against the Cleveland Indians on are now being played Friday March 28 at 6pm and Saturday March 29 at 1pm. Both games are being played at University of San Diego's new 3,500 seat, $13.5 million dollar, baseball stadium, Fowler Park.

Fowler Park is named for the Padres principle owner and USD benefactor Ron Fowler who funded a large portion of the ballpark's cost. The intimate ballpark opened last spring to much fanfare and acclaim. At the time Mr. Fowler had indicated that the Padres might play a game or two there in the future when asked about the possibility. It seems he's come through on that promise. Tickets are not yet on sale to the general public, but after a presale to USD and Padres season ticket holders they will go on sale to the general public on Feb 28th. But with only 7,000 seats available between the two games it's a good bet they'll go fast seeing as this is a very rare and very intimate opportunity to take in the Padres in a beautiful piece of San Diego's overall baseball landscape. It's also a good way to take in a little bit of that Spring Training feel for folks unable to make the trek to Peoria. 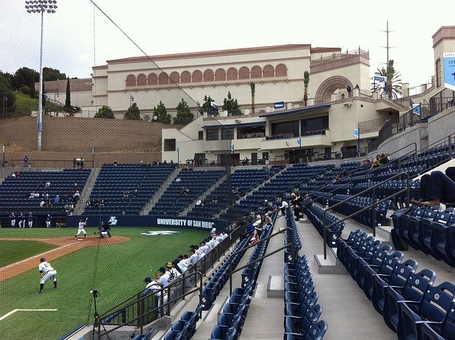