This is the first major league card of Joey Cora, and the only one of him issued by a major manufacturer in 1987. Joey showed up on some oddball cards that year, such as his Bohemian Hearth Bread issue, but had to wait until 1988 to make his Fleer, Score, and Topps debuts.

Donruss Opening Day was a fairly innovative set, coming at a time when most manufacturers issued one base set a year and nothing more. The set, as you might have guessed, was comprised solely of each team's Opening Day starting lineup. It can be differentiated from the regular 1987 Donruss set by its borders; the base set had black borders as opposed to the wine-colored borders on Opening Day cards. The set was uncompromising to its self-imposed limitations and included one starting pitcher per team, no relievers, and no stars who missed the first game due to injury. Lucky for me, Joey Cora had a hot spring and earned the Opening Day start at second base. 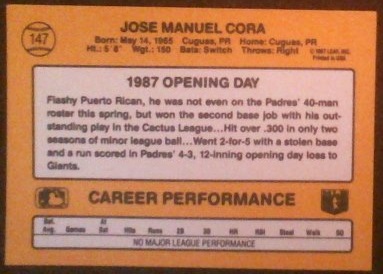 There are a couple things that stand out on the back of the card. The most glaring, and the one that irks me the most is the use of the term "Flashy Puerto Rican". There was nothing flashy about Joey or his game; as a matter of fact if he were paler he'd be gushed over as a gritty scrapper. Donruss took another big swing-and-a-miss by misspelling the name of his birthplace and hometown not once, but twice. Joey is from Caguas, Puerto Rico. As for Cuguas, I believe it's just north of Sacramende.