Why would they think Zack Greinke throwing a baseball at Carlos Quentin and igniting a fight that would lead to a broken collar bone and eventually a suspension would be a good punchline for a Valentine's card? You don't literally need a punch in a punchline.

I keep staring at it and wondering if I'm missing something.  I mean, maybe if at some point in the fight they accidentally kissed, but I'm pretty confident that that didn't happen.  I don't get it.  I am fairly certain it's not funny, even in a non-politically correct sort of way.  It also lacks a level of sexiness, what with Greinke's rear end front and center.  So what's it doing on a Valentine?

I feel bad for the intern that probably posted it.  People are without a doubt going to get (or act) offended and (s)he will get  into a butt load of trouble.  I'm just imagining if we had posted this fake card.  It'd be another Valentine's Day Massacre. I don't even want to think about it, it makes me nauseous.  Then again, the Dodgers posted a veiled threat aimed at the Padres in a Ron Burgundy tweet immediately after the fight, so maybe everyone will just agree it's hilarious.  It's hard to say how the internet reacts to these types of things.

As I'm writing this the tweet was deleted.  Let's pretend it never happened.  Here's a screen cap, so we know what to forget: 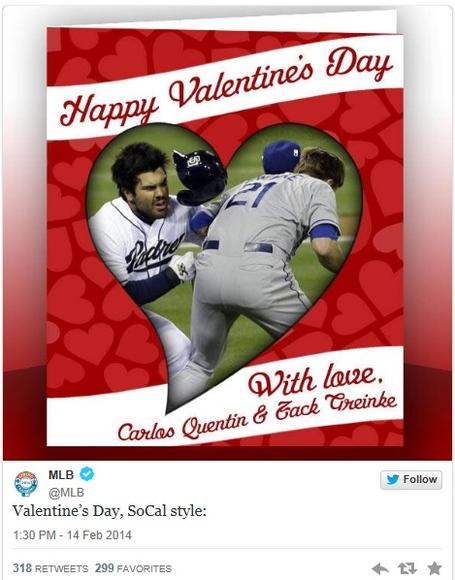