Cyr is pictured here on 2003 Upper Deck First Pitch #27. The photo was taken during spring training of 2002. You can tell it was taken in 2002 because of the Mike Darr memorial patch on Cyr's sleeve. The tip-off that it's from spring training is that he's wearing number 64; he wore 49 during his five-game regular-season stint. 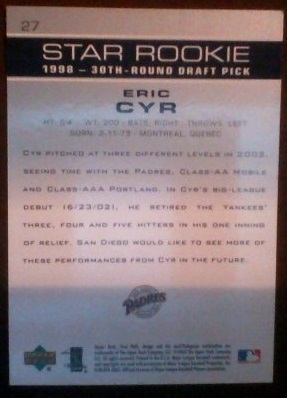 The back of the card mentions Cyr's successful major league debut; the folks at Upper Deck were charitable enough to not mention the four games that followed it. He gave up seven earned runs over his final five innings for a lifetime ERA of 10.50. They were also nice not to point out that Cyr was already a convicted sex offender at this point. He served 30 days back in 2001 after pleading guilty to "sexual contact with another without consent," which is somehow just a misdemeanor, following an incident involving coerced bathroom sex with a 15 year old.

Please note that at no point did I wish him a happy birthday.