(It took me a few days first to realize that I wanted to write something about Jerry Coleman's passing, then a bit longer to put those thoughts into words. Therefore I recognize that much of this is well-worn territory, but, as I suspect is the case for others here and elsewhere, this exercise is as much for my own sake as the reader's. I hope you'll excuse the indulgence.)

In the course of our time on this planet we each amass a body of work comprised of the various hues and streaks of activity, obligation and interest that make up human life. They might not begin at birth and end at death, nor do they all form an unbroken streak of presence, but they nevertheless create discrete lifetimes that we share in a variety of ways: a lifetime as a student, a lifetime of a career, a lifetime of marriage, a lifetime in music, a lifetime of baseball.

I've spent a lifetime in San Diego rooting for the Padres. I was born in 1983; for most of my childhood, my favorite pajama nightshirt was an adult one-size-fits-all "Tiger Tamers" promotional shirt, featuring the Swingin' Friar tormenting a wimpy-looking cartoon Tony the Tiger. This shirt was a constant reminder of my eternal nemesis in baseball, a team I swore I would loathe forever, but at some point that rooting priority was reshuffled for more urgent targets--probably sometime in the late 90s, if I had to take a wild guess. (Incidentally, I kind of like the Tigers now.)

Growing up, I never had cable TV, and of course the concept of channels dedicated to the sole purpose of showing every game of a single team's season is a relatively recent one, so my ability to watch baseball on TV was entirely reliant on fickle network TV programming and our miserable antenna reception. For most of the 80s and 90s I probably saw more baseball in person than I did on television. No, my connection to the Padres for many years was KFMB.

My dad had a proper stereo system back then, with those big vertical speakers that had wooden finish and the kind of rough outer fabric that made you want to rub your fingers on it. A system with a nice turntable (no touching!), a tape deck, even an early-model CD player, and of course a big fat receiver with large fancy knobs. When the evening rolled around in the summer, it was time to turn on the radio and listen to the game.

If there's one image, one single set of sensory details that conjures my childhood, it is that moment: the yellow light of the sunset filtering through the trees of the backyard into the family room window, the smell and chatter of my parents preparing dinner, and the soft, everpresent mix of crowd noise and radio fuzz that is the unmistakable signature of a baseball broadcast. In this setting, the announcer becomes the conduit to the game, a storyteller of heroic victories, daring feats and (more often than not) futile losses. In those years of analog means, I was hungry for any source of information I could find. The radio was my soundtrack, the sports almanac was my historical record, and the sports section was my daily connection to the outside world. I would sprawl out on the carpet with the page of baseball scores, my hands, wrists and elbows staining with cheap printer ink as I pored over the latest results, memorizing the names of players I'd never see, wondering if Tony Gwynn and Marvelle Wynne might actually be brothers, searching the box scores for the hidden narratives, the dramatic moments represented in zeroes, ones and twos that could be recreated in my mind the same way that Jerry Coleman called them over the air.

Jerry had a unique voice that was immediately recognizable. It was "reedy," a higher pitch than most, but not squeaky or wheezing. It was tensile, with the strength of a whip that was evident whenever he worked up to that unforgettable "Ohhh, Doctor!" Much has been made of Jerry's gaffes in the obits and over the years--and some of them are undeniable corkers that still make me smile today--but when I was younger, I didn't particularly notice or care about these things. Perhaps I wasn't yet smart enough to recognize a goof-up like that, perhaps I just didn't know any better. It didn't matter, because the way Jerry called a game was just the way it was called. Some broadcasters merit special attention for their excellence and professionalism. Vin Scully's probably never misspoken in his life. Joe Buck might have the highest level of objective decorum, a sheen of smarmy blandness that earns him indifference at best, and disgust at worst. But Jerry had just the right mix, in my undoubtedly biased opinion: enough sure-spoken, crisp grace to do the job right, but with a healthy amount of foible that never left you in doubt of his fallible humanity. It was a perfectly grounded and relatable style that told you he was human just like you, an appraisal that I'm sure Jerry would have appreciated, if he'd taken any time to think about himself.

Whenever a beloved figure in any field dies, the accolades come pouring forth. We want to eulogize our favorites, for a number of reasons. It's a cowardly thing to air grievances after someone has died. We want to remember their best, to help cope with the sadness. We want to build them into outsized heroes, examples to inspire ourselves, archetypes that would probably be an unfair comparison to these people in their actual lives. It's easy to be cynical about such effusive praise. We all like to indulge in honeyed words about our favorites. But I don't have much trouble believing those who speak highly of Jerry Coleman.

Part of that is the reason that Jerry was so well-suited to San Diego. The military connection is an obvious one, but it's also a sleepy town, one much smaller than the population suggests. I'd wager most longtime residents of the city have a story or two about running into him on an errand trip at some point. His daughter visited my family's orthodontist; we'd run into him in the waiting room once every year or two. For the last few seasons, I've had the privilege of being a stat stringer in the press box at Petco. I hold myself to a strict protocol with "famous" people--I don't bother anyone unless the situation calls for it. But you can learn a lot about people through observation of the little things, the ways they interact with others in the hallways, the elevators, the buffet lines, and the Jerry Coleman I saw in person over the years, smooth and straight-backed, was absolutely an extension of Jerry Coleman the broadcaster--a down-home gentleman who was an eternal optimist with a wry but good-humored comment ready at any moment.

The other reason I can believe the tales of St. Coleman is our closest point of comparison: his longtime broadcast partner and friend, Ted Leitner. Without Jerry, "Uncle Teddy" is largest remaining figure in San Diego sports radio, and I'm sure he would willingly tell you that he'd never hold a candle to Jerry. Ted is a living embodiment of the foil. He is--and I say this with great affection--an oversized character, a self-pleased windbag who never met a topic he wouldn't love to talk to death, excitable to the point of babbling, an avid practitioner of the stream-of-consciousness narrative device, and a raconteur who will happily regale you with tales of his many marriages and divorces. Next to such a vivid example of man's base and sordid nature (again, I love ya Teddy), is it really that hard to believe that some people really are that classy? They made a fantastic team, of course. Every regular listener was familiar with the banter between the action, the stories and the "what didja do today, Jer," a privilege seemingly only afforded to baseball announcers due to the unique pace of the game. There was a clear affection for each other in every interaction, and Ted's beautiful and heartbreaking announcement of Jerry's death is a fitting tribute to a lifetime of announcing together, two minutes that perfectly encapsulates the feeling of loss when one might spend hours instead.

It's appropriate to the topic of this piece that Jerry Coleman was a man who lived many lifetimes. The monument to him that was placed in the stadium in 2012 speaks to that. There was Jerry the Ballplayer, Jerry the Pilot, Jerry the Broadcaster. No doubt there was also Jerry the Husband, Jerry the Father and Grandfather, and other lifetimes that we're not meant to know. I haven't even touched on his military career, a topic that others much more qualified than I could describe and put into context. We can only wish to have led a life as rich as Jerry's, but ours have been enriched because of him.

I've experienced a lifetime with Jerry Coleman. One of baseball's most endearing traits is its notorious resistance to change, a reliability that always begins with the sunny optimism of spring and ends with the cold comfort of winter. My lifetime with baseball has ended; in 2014 it will begin anew without the voice that narrated it for as long as I can remember--literally. This second lifetime will house great memories of its own, astonishing victories and gut-wrenching losses, even a World Series championship.

But it probably won't be as good. 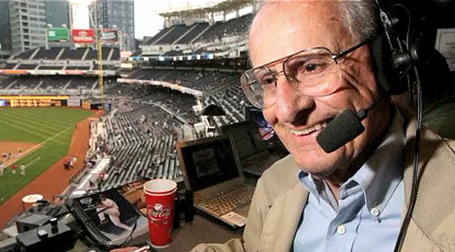