Share All sharing options for: Padres fans gather at Jerry Coleman's statue after news of his death becomes public

The Padres have said that due to Jerry Coleman's death today they'll leave the area around his statue open to the public until 11:30 p.m. tonight.

I went downtown for about a half hour after I heard the news.  There was a two man news crew and one other Padres fan there when I arrived. Flowers, flags and patches had already been placed at the feet of Jerry's statue from those that came before me.

A small group of fans gathered as time passed.  Some were visibly and understandably emotional, while others stood stoically with their thoughts.  It was a solemn moment but once fans had paid their respect to Coleman, they stepped away and started to talk with each other and share stories. That's when the tears disappeared and the smiles could be seen and laughter heard.

I was talking to Corey who is better known to fans as the Dancing Friar.  We agreed that while it's difficult to mourn the passing of such a great man, he had certainly lived an extraordinary life and that's something to honor and celebrate.  While neither of us knew him personally we both cherished our meetings with him.  He was just as genuine, humble and funny as you've always heard.

It was cathartic to be around other Padres fans that adore Jerry as much as I do.  If you're feeling the pangs of sadness and live in town I recommend you drop by his statue and spend some time there, it might just lift your spirits like it did mine. 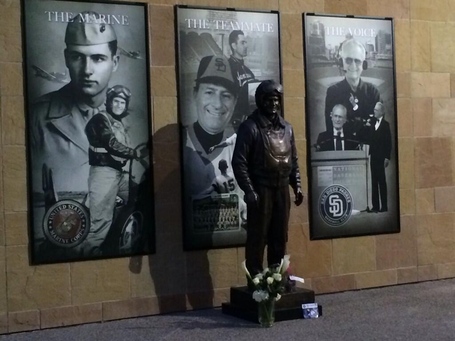 Jerry Coleman passes away at age 89