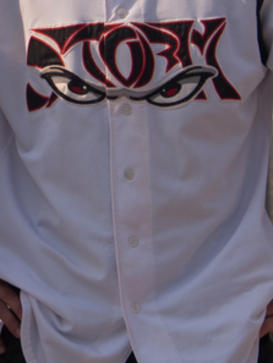 The second-generation star is making his own name

Adamson, who split last season between Fort Wayne and Lake Elsinore, failed to reach base his first two trips to the plate but was unstoppable after that. He walked and was stranded in the fifth inning before collecting his first hit in the seventh. After moving to second on a single by Joey Wong, Adamson swiped his eighth bag of the ABL season before scoring on a wild pitch by Nick Valenza to make the score 4-2 in favor of Adelaide.

The Heat had narrowed the deficit to one run by the next time Adamson came to the plate. With two runner on base with one out in the bottom of the eighth inning, Adamson tripled to drive in the tying and go-ahead runs. Perth reliever Cameron Lamb (I wonder if fans call him Cam Lam) filled the bases in the top of the ninth but escaped unscathed for his third save of the year.

Adamson's strong showing boosted his season average to .310 in exactly 100 at-bats. Of those 31 hits, five are doubles and three have been good for three bases. The win boosted Perth to 30-14, best in the six-team league by far. Second-place Sydney, with a 22-22 record, is the only other team even at .500.