The 2009 first round draft pick will experience yet another setback in his professional career, but continues to look toward the future.

Looks like another bump in the road for Donavan Tate. He posted this picture on Instagram yesterday, revealing that he has undergone surgery for a torn achilles. 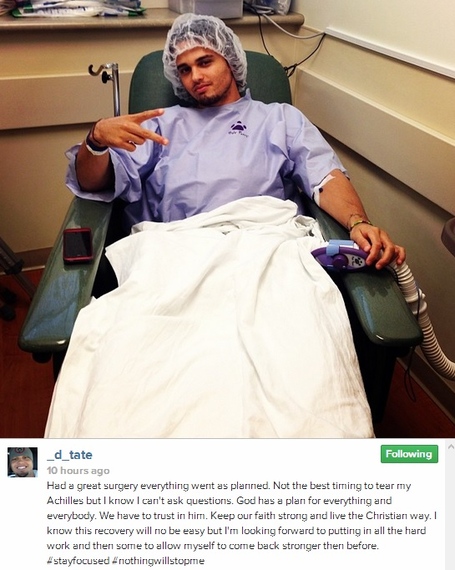 If history is any indication, Tate really means it when he says "nothing will stop me." Since being drafted by the Padres in the first round in 2009 and getting the largest signing bonus in franchise history when he signed with the team later that year, Tate's professional career has been a tumultuous one.

He missed the chance to make his professional debut in 2009 because of a pubic bone injury, which required surgery and sidelined him for the rest of the season. Then there was the infamous ATV crash in late 2009 that resulted in a broken jaw, though he and the front office were confident that he would be ready and raring for Spring Training 2010. But that year, he suffered a shoulder injury that caused him to sit out the rest of the Spring, an intestinal issue that sidelined him for a month, and knee & wrist injuries that turned 2010 into a full-blown bust.

Going into the 2011 season, things were looking promising. Jed Hoyer projected that Tate would most likely spend the year in Fort Wayne working to get back from the injury issues that had plagued him up to that point. Instead, Tate faced a drug suspension that season after having tested positive a second time for a "drug of abuse." In 2012, he split time between Fort Wayne and Lake Elsinore. His numbers weren't all that impressive, but he at least saw some consistent playing time, which was encouraging after what he had gone through the previous years.

But 2013 saw him relapse once more. Reports surfaced of Tate missing Minor League camp due to undisclosed (at the time) personal reasons. It was later confirmed that what many had suspected was true - Tate had been completing a second rehab stint for substance abuse. As Corey Brock reported, Tate had spent five months in a rehab facility in California. But upon his return he seemed to have a better outlook and was looking forward to a fresh start to his professional baseball career. He played in 23 games with the Eugene Emeralds and looked to be on an upward swing. Fans were pulling for him, and he really seemed to have finally taken a turn for the better.

So the news of this new injury is discouraging, but hopefully he will come back strong, like he has before. After all, he has overcome a lot worse in his young career and the 23-year-old still has a long way to go and some time to work with. So while many have already resigned to giving up on him, signing him off as one of the biggest busts in Padres history, I'll be rooting for him when he returns and gets back to tearing up the basepaths this Summer.