I have a couple of Dan Miceli cards and several Joey Hamilton cards but I chose these two because they go together so well. Just look at 'em, wouldja? Twinsies!

Hamilton and Miceli were teammates on the 1998 National League Champion Padres and celebrated their twenty-eighth birthdays together with a day off from working as their teammates beat the Giants 8-3 without their help. Trevor Hoffman picked up save number 47 of the year in that game, despite the five-run margin. He was brought in with two runners on and two outs in the eighth inning and shut the door from there.

Joey Hamilton didn't have an outstanding 1998 season but did what he was expected to do. He made over 30 starts for the fourth consecutive season, and his 4.27 ERA and 92 ERA+ mirrored his 4.25 and 92 from the previous year. Hamilton did, however, lead the league in walks with 106; 23 more than his previous high. Like most pitchers he wasn't much of a hitter, but when he got a hold of one it could go far. 1998 was his third consecutive year with a home run. Fittingly, the back of Hamilton's 1996 Upper Deck Collector's Choice card features him in a rare pitcher at the plate shot. 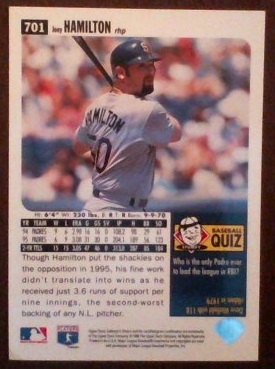 Also, the Baseball Quiz trivia question on the back of that card is no longer valid now that more than one Padre has led the NL in RBI.

As for Dan Miceli, I won't even bother telling you how his 1998 season went since this card is from 1999 and already has it all spelled out on the back. 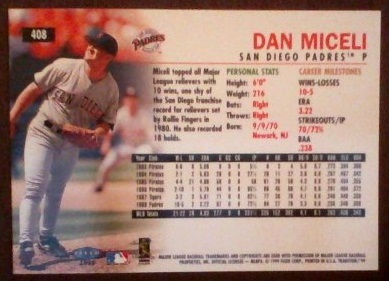 Pretty impressive stuff, right? After 1998, his sixth season, Miceli went on to pitch eight more. In addition to the Pirates and Tigers from his pre-Padres days, he would eventually pitch for the Marlins, Rangers, Indians, Yankees, Astros, and Devil Rays, not to mention three separate stints with the Rockies. He was to them what Rudy Seanez was to the Padres.

Hamilton didn't bounce around as much, pitching five more seasons between the Blue Jays and the Reds. Sadly for him and them, he was rather ineffective after leaving San Diego.

There will be no Birthday Card post tomorrow since unfortunately there have been no Padres born on September 10. Sure, I share a birthday with Arnold Palmer, Randy Johnson, Roger Maris, Joey Votto, and others but I'd trade any one of those for a Friar. Oh well. The day after that is shared by two current 6'6" Padres born in 1986 (Hey, they were born the same day and are both really tall. We should call them the Tw-- you know what, scratch that. Never mind), so I'll break out my favorite cardboard of them then.