I picked this card out as Nick Hundley's "birthday card" before the game, and it seems even more appropriate afterward. He's shown celebrating, much as he had cause to today -- not only because he turned 30 but also because he delivered a pinch-hit, three-run double in the seventh inning to take the lead for good.

What Hundley is celebrating on the front of his 2010 Topps card is explained on the back: 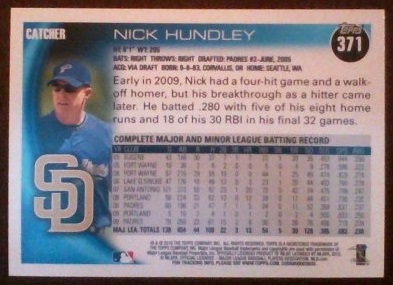 I'm going to go out on a limb and say that's the aftermath of that walk-off homer they mentioned. He is wearing white and looking extremely charged, after all. It happened in the sixteenth inning of a May 16, 2009, game against the Reds. While it was only the seventh home run of Nick's career, it was his second off of Micah Owings, a guy who would later become his teammate. Those two homers were tied for the most Hundley had hit off one pitcher until he got his third against Barry Zito last Monday.

Happy birthday, Nick! Thanks for making it a happy day for your fans as well.