Show Us Your Luchador Face

Share All sharing options for: Show Us Your Luchador Face

Saturday is luchador mask night at Petco Park. It's a pretty rad giveaway. If you're not convinced, just ask Jonny Dub. 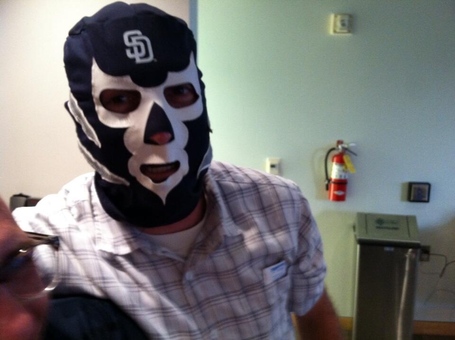 Still not convinced? Let's see how Andrew Cashner feels about it.

Imagine that guy throwing 100+mph fastballs at you. You gonna swing at those pitches? I think not.

Unfortunately I don't think we'll be seeing Casha Libre taking the mound for our Padres anytime soon. So I present you, Gaslamp Ballers, with a challenge:

Back when the Padres gave away those fedoras I was hoping to see some cool pictures of fans wearing them on Twitter. Mostly I saw pictures of the fedora just sitting there on a table next to a beer or on someone's lap at the game. Not very fun. Let's try to be more creative this time around.

*not like THAT, you perv
** Don't have a Twitter? That's okay. Just post your picture down there in the comments. Or in a fanshot. Better yet? write a fanpost about your adventures while wearing your Padres luchador mask.