I was excited when the product was announced, because it gave me more Joey Cora cards to chase for my super-collection. Well, not really more since they already existed in a way, but different ones. And since it's my goal to own as many copies as possible of every Joey Cora card, I've been keeping an eye out for these on eBay and online hobby shops since the product dropped. Since the Cora red 1/1 hasn't surfaced yet and I'm too poor and not depraved enough to pay $200 for a ten card box (yeah, seriously) just to have a very slim shot at pulling a Cora, I've focused on snagging up the silver and gold ones that are available on the open market. The silver ones are a story for another day,  a day when I have at least eleven of them. Okay, that would be ideal, but I'll probably check in when I get my first. I've just been focusing on getting the golds since all the ones of each I've seen on the 'bay cost about the same. 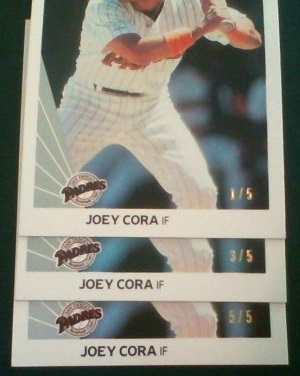 These are three out of the five of these cards in existence. They aren't my favorite Joey Cora cards, but they definitely are my scarcest. It makes it a lot easier to collect every copy of a given card when there are so few of them. I only have about a half-dozen or so of his actual, unaltered 1990 Leaf cards, so I'm nowhere near the 60% completion mark there that I have on the gold Memories mini-set.

So, if you have any of these or any other regular old Joey Cora cards, holla at ya boy, as only old, out-of-touch people like me are still saying.