Share All sharing options for: 8.5 Will Venable Baseball Cards

The big news of the day is of course Will Venable's new deal with the Padres, who bought his final two years of arbitration eligibility for $8.5 million. And I thought, what better way to celebrate this wondrous occasion than with baseball cards? Immediately after that I thought there have to be at least 138 better ways but screw it, I'm going to do a card post anyway.

Unfortunately I don't have 8,500,000 Will Venable cards, so 8.5 will have to do. I picked out the first nine I could find since I'm a bit disorganized at the time. Here's Will through the years: 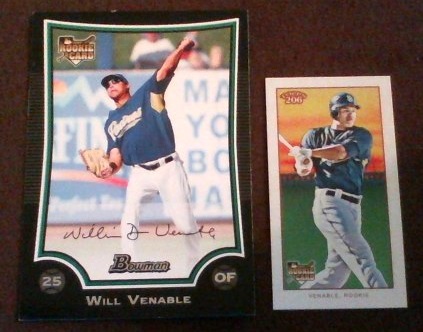 Will was still technically a rookie when these came out, as he only accrued 124 PA in 28 G in 2008. He had cards produced in previous years but those are considered "pre-rookie" cards due to semantics that I picture being written up by obese men wearing suspenders and smoking cigars. The T206 Mini is the Piedmont parallel, which is a way of saying that Topps figured out that us nerds will buy or chase a dozen copies of the same card if it has they slightest of distinctions from one another. I hate it, but not as much as I hate myself for being a sucker that goes along with it. 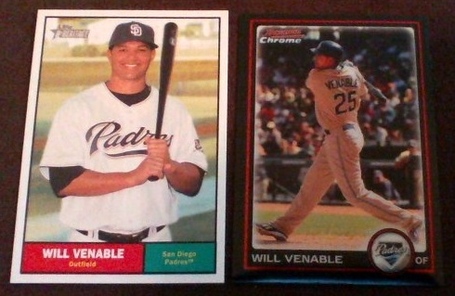 That year's Heritage set was based on the classic 1961 Topps set. Both of these cards, like his Bowman rookie card pictured above, note on the back that he played basketball at Princeton. Speaking of people named Will who were good at basketball and got accepted to Princeton, remember that episode of Fresh Prince when Will solved the Rubik's Cube and got all chummy with the admissions officer, and then Carlton -- or, rather, Rapmaster C -- had a meltdown and threatened to murder the guy? They just don't make fine family entertainment like that these days. 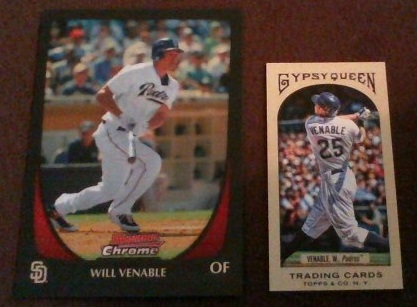 Hey, neither of these mention Princeton or basketball. That's progress. On a side note, Will should wear his socks like that all the time. Well, not exactly like that; he and everybody else need to invest in some stirrups. That should have been a contract stipulation. 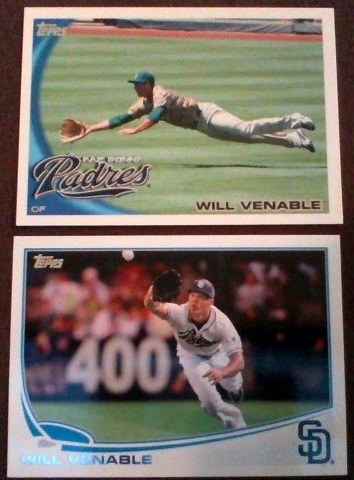 Any discussion about Will Venable would be incomplete without veneration of his stellar D. Here it is in action two times. Great, now I have the Fugees' cover of 'Killing Me Softly' stuck in my head. 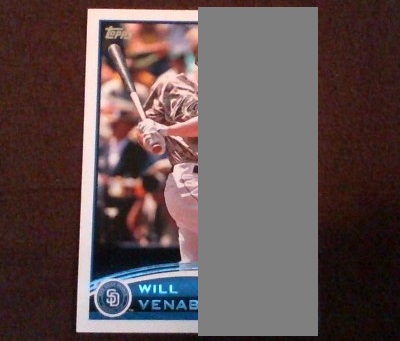 Lastly, here's the half-card. I wish the team had signed him for an even $9 million so I could have shown you the whole thing. Oh well, at least they didn't give him $8.2 million, so this way at least you get to see his hands and dat ass. It's a nice one, good for sitting on and looking at.

Welp, that ties a bow on it. I'm sure he'll spend his money wisely and not blow it on completely useless garbage (say, baseball cards, for instance) like some of us are inclined to do. After all, he did go to Princeton.