Remember that time Joey Cora caught Mark Grant for two innings back in 1990?

Share All sharing options for: Remember that time Joey Cora caught Mark Grant for two innings back in 1990?

I always liked the cards that Score put out in the late-'80s and early-'90s. It wasn't because they were high quality or hard to get, and it wasn't because of the fronts of the cards. The designs tended to be bright and garish, but in 1991 they were fairly restrained. 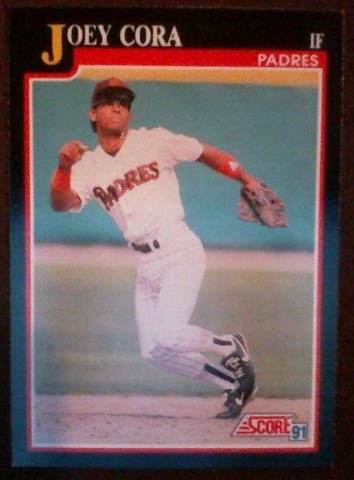 See, that's not too bad. It has a nice action photo complete with bright orange wristbands, mock-stirrup two-in-one socks, and flip-up shades. But, like with most cards by Score, the really good stuff is on the back.

The thing that always put Score in a class of its own for me was the text on the back of their cards. There was much more than had been on any cards before it, and the content was nearly always much more entertaining than the blurbs Topps would occasionally throw on their cards. Joey Cora's '91 Score is a great example of this. 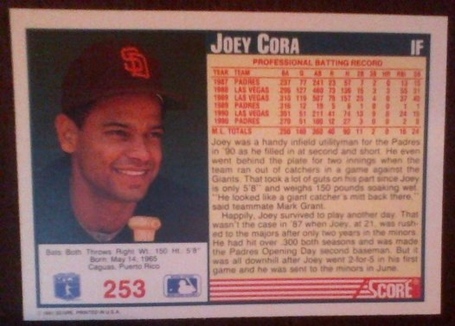 I knew about the time that Joey filled in as emergency catcher, but Score was the only card company to mention it. I know I've read or at least skimmed the back of copies of this card countless times and seen the Mark Grant quote, but had never looked up the game to see the particulars.

After a bit of digging, I found that the game in question was played on June 14, 1990, and Mark Grant was indeed the man on the mound for both of the innings Joey was behind the plate. The situation definitely qualified as an emergency; the Padres went from having two available catchers to zero in the span of two plate appearances.

Down 3-2 with one out and a runner on second in the bottom of the seventh inning, manager Jack McKeon sent Fred Lynn in to pinch-hit for that day's starting catcher Mark Parent. Lynn struck out and McKeon sent Benito Santiago to the plate in the pitcher's spot since he'd be coming in the game on defense anyway. Santiago was hit by a pitch... but it gets even worse. The pitch broke his arm. Cora got the call to pinch-run.

After Cora took first base, Bip Roberts grounded out to second to end the inning and McKeon's real problem was upon him. Both of his catchers were out of the game and no one on his bench had any experience behind the plate. Roberts and Jerald Clark also volunteered to give it a try but, as Scott Miller of the L.A. Times reported at the time, Cora got the nod since he spoke up first.

Mark "Mud" Grant entered the game at the same time, and got a kick out of seeing his diminutive teammate jog out in gear made for a much larger man. "He looked so funny running out there in that gear," Grant told Miller. Once Eric Gregg said "Play ball," it was time for the unlikely battery to get to work.

Meanwhile, one of the calmer men in the vicinity was Grant. Gregg may have been wary behind the plate, but Grant, who gave up three runs on four hits in two innings, said he wasn't nervous.

"You know what? I really wasn't," said Grant, whose pitches were, for the most part, called by Cora. "It was kind of funny in a way to see him back there. It broke some of the tension."

Grant gave up two runs in their first inning working together. Giants pitcher Jeff "Cowboy" Brantley led off the inning with a single in a showdown between future broadcasters, Brett Butler bunted him over, and Will Clark was intentionally walked to bring reigning NL MVP and former Padre Kevin Mitchell to the plate. Incidentally, Mitchell and Grant were traded to their respective teams in a deal involving one another. Nearly three years earlier, on Independence Day, 1987, the Padres sent Mitchell, Dave Dravecky, and Craig Lefferts to San Francisco for Grant, Chris Brown, Keith Comstock, and 1989 NL Cy Young Award winner Mark Davis.

If Twitter and Gaslamp Ball game threads were things that existed back in 1990, everyone would have been typing "Giants won the trade" as Mitchell roped an offering from Grant into deep left-center for a double that scored both runners. The Giants extended their lead to 5-2 and Mudcat caught present-day Diamondbacks third base coach Matt Williams looking to end the inning.

After the Padres wasted singles by Mr. Padre and Mike Pagliarulo in the bottom of the eighth, Grant and Cora returned to the field. Hall of Famer Gary Carter led off with a home run to make it 6-2, and then Dave Anderson singled and stole second. Cora didn't make a throw, as he was unable to dislodge the ball from his mitt. Anderson moved to third on a wild pitch that sailed well above little Joey's head. Grant got three outs without allowing the run to cross, though. The Padres loaded the bases in the bottom of the inning, but a comeback just wasn't in the cards.

That would prove to be Joey Cora's only time behind the plate, but not the last time the Padres would be forced to call on an emergency catcher. That's a story for another day, though.