(look at that form, eat your heart out, Lefty)

So my custodianship of the Jersey has been a bit of a tumultuous one. Originally I was supposed to go to St. Louis for Padres-Cardinals with it. However, my travelling buddy ran across, let's just say "life", just before the All Star break. Bummer. So I had it about four days and sent it off to the next person. Then, since my buddy lives in Atlanta, it was suggested I fly out there for Padres-Braves. Wonderful! I proclaim in hopes of salvaging my travel this season. So I begged and pleaded put in a simple request for the Jersey again (remember the cover sheet). Alas, my hopes were dashed when I got a message from her that she had to work that whole weekend about 10 days before I was supposed to go. I was 0-2 or 2/5 of a Chase Headley pitch count on my travel plans this season. However, Mr. Box was kind enough to see my plight and allowed me to keep the Jersey for "staycation" adventures.

Our escapades start off when my friend (and ardent Padres fan), Jeremy Nash, came down from his residence in Northern California. We all convened at the Sycuan Resort and Golf. By all I mean, and I use Twitter handles here because this is how we all first met: Jeremy (@Jeremy_Nash), Gavin (@CT2SD), Cesar (@WordOfTores), Edgar (@edgarbautista) and Chris (@sportsbrain). We also had two guests of honor join us. You hear them every weekday morning 6-9 AM on XTRA 1360, Chris Ello (@XTRA1360Chris) and Ben Higgins (@BenHigginsSD). Ben is a pretty avid golfer and we were all doomed to him smoking the lot of us. Gavin had won tickets when he won the "Pick the Stick" so thanks to Gavin for allowing The Jersey to come! Ben was actually a little excited to see the Jersey itself. 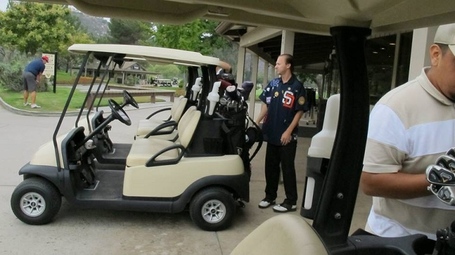 Here we all are getting ready

The front nine was pretty hum-drum if I do say myself. Gavin and I paired with Ello and Ben and boy can Ben drive well. I found myself driving not to shabby myself. My short game was terrible as evidenced by my 51 on the front nine (I told you we'd get smoked). On the back nine we changed up the groups and Gavin and I went with Chris and Jeremy foursome. 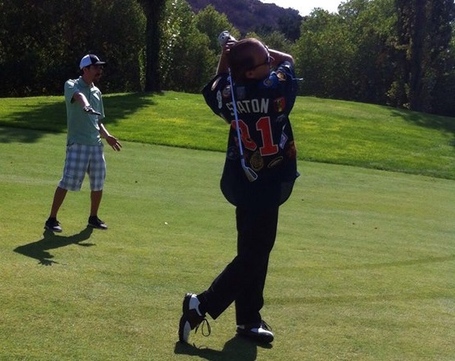 No wait Brandon you're gonna hit--oh too late..

Side note: it was getting quite warm as the day progressed and that jersey can make you sweat! Doesn't help that I was wearing a black polo underneath. I digress. Our merry round of golf continued despite my actual game getting less and less merry. The highlight of the day was when I nearly hit Cesar, who was playing ahead of us at the time. He kind of dared me to try. Well I wasn't trying to hit him but I mishit my tee shot and ended up hooking the ball...right at him. We all broke down in laughter watching him scramble away and screaming "Wait! I was just kidding!" I couldn't stop laughing about it for the next three holes. I'm still laughing about it right now. We finished our round and then disaster struck! My cellphone fell out of the cart between 16th and 18th holes. Needless to say my day was kind of ruined. I did have a spare phone I could use. All in all, I had a blast at Sycuan Golf. It's a pretty course.

The Jersey Staycation Adventures continue into Saturday. It wasn't quite as exciting as Friday was. It all starts out at the Dodgers-Padres game where all six of us convene onto Petco Park this time. The game itself was pretty meh as the Padres ended up losing that match but we managed to get up to some No Good. 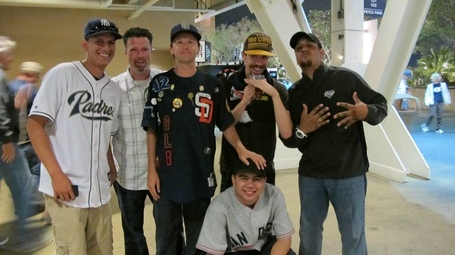 Up to No Good

The real highlight was the event after the game. If you follow Jeremy on Twitter, you might have noticed that he's a not too shabby artist. Well this garnered the attention of the Convivo Society in Little Italy! They were doing an art exhibition on Italian-born or descendant Major League Baseball players. Jeremy had some some artwork on our lovable outfielder, Christopher Denorfia, whom you will recall also played for Team Italia in this year's World Baseball Classic. 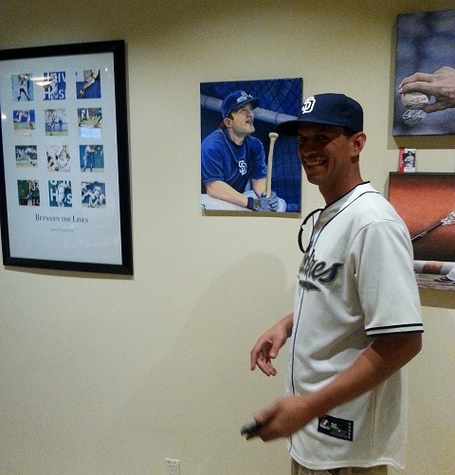 The artist himself, Jeremy Nash with his portrait of Norf

Jeremy got introduced on stage to talk about his art work and a peculiar question of where he was conceived. I can't make that one up. It was then followed by the worst stand-up "comedy" I have ever heard. It was absolutely cringe worthy where I had to go outside. The puns, make it stoooop!!

There was talk of Norf coming to actually drop by along with Nick Punto and say a few things about being a MLB player of Italian descent but alas they never showed. I would have loved to grab a photo of The Jersey with Norf. 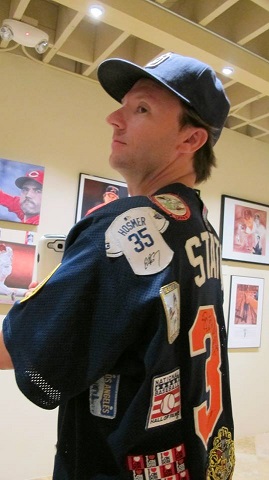 Modelling for the camera. Work it guuuuuuuuuurl 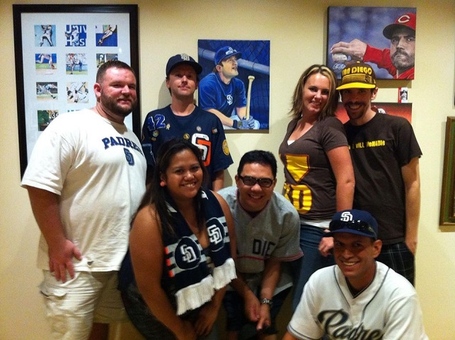 We all love The Norf

It was real nice to see Jeremy get some love for his artwork. I believe it is still there at the Convivo Society on India St. in Little Italy. Go and check it out!

This about wraps up my leg of the Sisterhood saga. It wasn't as glorious or glamorous as I would have hoped it to be. But one can only do with the cards dealt. It was an honor to be a part of this awesome community project. I hope to do it again when I travel for real next time.

The Jersey has long since passed from my hands to another's its long and growing tale, however, my adventures continued posthumously so to say. This weekend (Sept 28-29) I visited my grandmother and she had told me she had some baseball cards for me. Reveling in my 10 year old self, I happily accepted grandma's gift. When I thumbed through the card collection, my eyes widened open as if I saw a heavenly apparition of Mark Kotsay appear before me to give me The Word. I scurried for my phone to capture what I saw before my eyes. It's a sign! 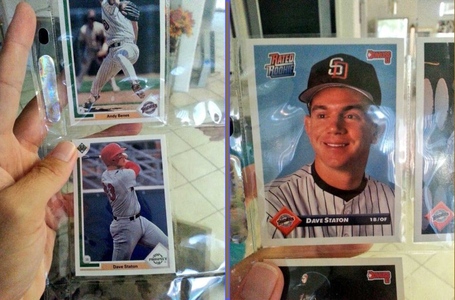