As some of you know, it's my goal to collect as many Joey Cora cards as possible. Not just one of each that was issued, but as many copies of each that I can. I know it's not feasible to own them all because fans of him, fans of the teams he played for, and set collectors will have copies they won't want to part with. Plus, there are still cards of him that are in unopened packs in unopened boxes in unopened cases shoved in the corner of random warehouses. But nevertheless, I still want to have more cards of him than anyone else.

When I first decided that I wanted to collect Joey Cora cards in that manner about a year-and-a-half ago, someone informed me of a Tim Wallach collector with the same goal. His collection is much, much, much more advanced than mine and has earned him considerable acclaim. I've sent him Wallach cards on a few separate occasions, and he has returned the favor with Coras. In fact, one of the cards he has sent me is a copy of the card featured here today. I only have seven copies of it, but without him I'd only have six, so I think that's a good enough excuse for me to give his incredible blog a plug.

1991 was the last year that Joey Cora would be pictured as a Padre on his baseball cards, as he was traded to the White Sox on the eve of Opening Day. For that reason, he was included in the 1991 Fleer Update set in his new set of pinstripes. Here's how his Padres and White Sox issues look side-by-side: 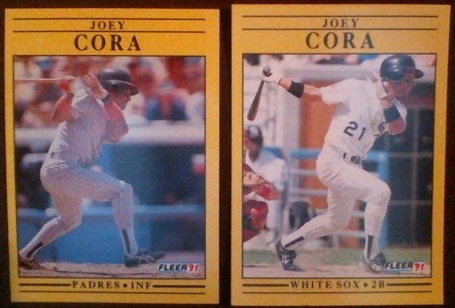 I like that it's pretty much the same shot, although the second one is centered much better. It's worth noting that Joey is shown wearing number 21, which he wore only briefly before moving on to the 28 that he became known for. Also, he's listed as an "INF" with the Padres, but had earned "2B" status with the White Sox. 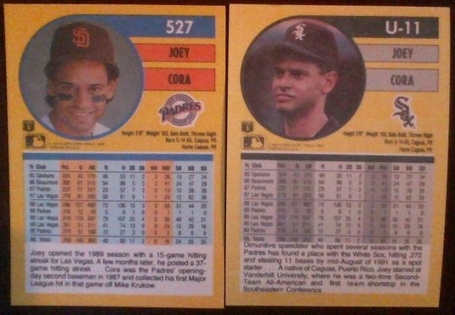 One detail that might not stand out is that Cora is shown wearing the old brown pinstripes, but the then-new blue and orange logo is shown on the back of the card, as 1991 was the year that they made the switch. It's interesting to compare his hairstyles. I suspect Fleer used a photo that was a couple years old, because he had already begun keeping his pelo well-groomed during his last couple seasons in San Diego.