I was invited down to Petco Park with a bunch of other Padres bloggers to meet new Padres President / CEO Mike Dee. There were five bloggers in attendance from Padres Public, and one each from Lobshots, Friarhood and Gaslamp Ball (hi). Six of the eight were wearing throwback colors of brown, gold and orange. It was pretty obvious what we had on our minds. 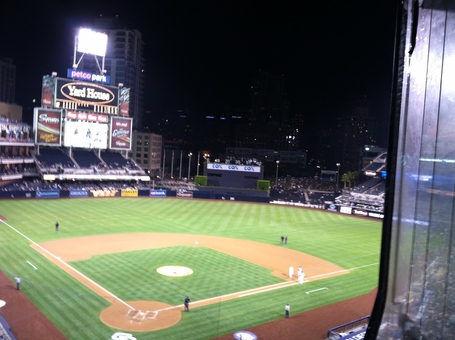 We were escorted up to the Crow's Nest high above home plate where the President's suite is located. There we waited. We ate food and drank drink. Most of Padres Public raided the fridge for beer like it was a frat party but some of us tried to show a little class by choosing to quench our thirst with Perrier unflavored carbonated mineral water.

.@gaslampball is such a jerk. He's been drinking Perrier the whole time tonight....with his pinky up.

It was good seeing all those guys again. With the multiple social media nights hosted throughout the year we've probably been able to get together about five times.

Padres GM Josh Byrnes was in the GM suite next door with Sr. VP of Baseball Operations Omar Minaya and his actor friend Kevin Dillon.

Byrnes was nice enough to pop into the suite for a few minutes to talk with us. The Padres Public guys were asking him why he never touched his coffee during his episode of Cup of Coffee with Dick Enberg. I guess it's become a popular topic of conversation on Twitter. I felt a little out of of the loop since even Byrnes seemed to know about it.

I waited for a break in the coffee talk and then asked him a question about Coach Kentera's report that Cory Luebke may need an additional surgery on his arm and miss Opening Day 2014.

Heard @CoachKentera say that #Padres SP Cory Luebke may not be ready by Opening Day 2014. Hasn't progressed and may need another surgery.

He admitted that Luebke was still feeling some pain and stiffness but didn't want to go on the record about the possibility of surgery.

Byrnes is always very pleasant in our discussions. 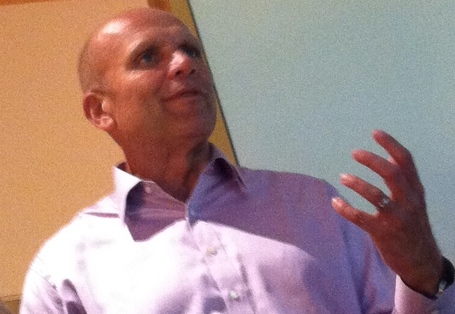 Padres President Mike Dee arrived in about the 7th inning. He's a charming guy with a very friendly disposition. He was all handshakes and smiles. He noticed right away that we were clad in retro Padres colors and said he was expecting the inevitable uniform discussion.

For about a half hour everybody was giving advice (some of it conflicting) about what the Padres should do. Rick from RJ's Fro was wearing a Bring Back the Brown t-shirt. He made a long impassioned plea for brown. This may be the three bottles of Perrier that I consumed talking, but I think at one point he even started to cry.

I chose not to say much, I mostly just nodded when I agreed with a point and shrugged my shoulders when I disagreed. The problem with the Bring Back the Brown movement as I see it, is its supporters all have different ideas of what it means. Some are only concerned with brown and they don't care how they get it. They'll take brown with navy blue, with powder blue, with tan, with white or orange. I do not support any of these ideas, in fact I'd rather we just keep our crap colors now if we're not going back to the original brown and gold that the team is universally identified with.

Hopefully someone in a position of power with the Padres will one day make the right decision. From my reading of his reaction I seriously doubt it'll be Mike Dee.

Dee asked what we thought about returning to some of the successful marketing that the Padres had in the late 90s. He wanted to know if we'd support the return of the "Keep the Faith" slogan. I think all of us did. He asked if we liked the Compadres fan loyalty program. All but one did. He also said we can expect to see more funny commercials like we had in the 90s as evidenced by the new one of Cashner wearing a luchador mask.

Dee told us stories of his days with the Padres before he left with Larry Lucchino to join the Red Sox. One was about the logistics behind the Eric Owens' dirty jersey give away. The manufacturer in China couldn't quite grasp the concept of a shirt that appeared to be stained with ballpark dirt. In order to give them a visual aid, Dee and others took a white shirt and rubbed it on the field of Qualcomm Stadium and Fed Ex'd it to them. It worked. Brady from Lobshots, proclaimed it "the greatest story ever told!"  Brady's enthusiasm scares me sometimes.

I asked him if he would consider moving the Hall of Fame plaques into an area that was accessible to fans. He was very enthusiastic about this idea and said he was considering a monument park by the sand pit. He also said he's thinking about replacing the "Beacher" seats (which he just had painted) with with a grass berm.

Unfortunately he didn't seem to be in much of a rush to get a new video board, thinking that the one we have now still looks okay at night.

Enjoyed meeting some of our bloggers tonight. Thanks for the feedback, guys. Looking forward to hearing from more fans at #TellittothePadres 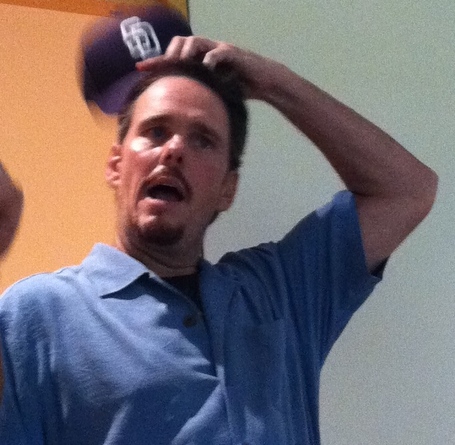 Kevin Dillon, star of Entourage, was sitting by himself in the GM suite towards the end of the game. Brady from Lobshots waved him over and developed a severe crush on him. He visited with us Brady for about 15 minutes. He grew up a Mets fan and has known Omar Minaya for about 25 years. He came to San Diego just to see him. Dillon was obsessed with folding the brim of his Padres hat. He ragged on our old Padres 70s colors but kept comparing the current hat to some of the retro hats. Scott Marshall, the Padres' vice president of concessions and retail had varying sizes of retro caps brought up to surprise Dillon. He loved it. Dillion said they're still hoping to get the Entourage movie made.

Tell it to the Padres

Padres leadership will be hosting a Q&A that'll be televised on Fox Sports San Diego tonight. You can ask questions from the safety of your own home by using the hashtag #TellItToThePadres

Submit your questions for #Padres leadership using #TellittothePadres or email tellittothepadres@padres.com. They may answer live on air!