A Baseball and a Duck Call: My Five Minutes With Cashner

Share All sharing options for: A Baseball and a Duck Call: My Five Minutes With Cashner

Andrew Cashner came out to Camp Pendleton today to show some military appreciation and meet with fans. My mom works on base and let me know about the meet and greet, so I headed out there to meet him. The event took place from 11am-2pm at the Country Store, which is sort of like a big convenience store, at the Mainside MCX and was sponsored by BodyArmor.

I was running super late and got there around 12:30, scared that there would be a ton of people. But when I pulled into the parking lot, there wasn't the swarm of fans I was expecting. I walked up to the door and was greeted by a woman who, upon seeing my Padres shirt, said, "Oh! You're here for the signing right?" I said that I was and she pointed me to the "line." There was no one in line. Just me. I had to wait a few minutes because when I arrived, Cashner was in the middle of an interview with a military member. As I was waiting, five more people showed up and got in line behind me. The woman who greeted us implored us to "Invite friends! Tweet about it!" They seemed kinda desperate. I was honestly shocked there weren't more people. I know it's the middle of the day on a Tuesday, but I've been to quite a few of these signings before and they've always had a ton of people show up. I'd never seen it like this before, and considering he iss arguably our most exciting pitcher on the staff I had expected it to be a large crowd.

Nevertheless, I was super stoked. They're kinda strict about dress codes on base, and the two guys behind me were asked to remove their caps since they were inside. The guys stressed a little, going over to a nearby freezer to check their hair in the glass door. It made me self conscious about my own hair so I kept messing with it and trying to place the strands in the exact right spot. I talked to the other people in line while we waited. One of the guys was planning to have a one hundred dollar bill signed by Cashner, but was soon told that it wouldn't be allowed because that's illegal. He didn't bring anything else, so he was given a bottle of BodyArmor to have signed.

As I watched and waited for Cashner's interview to end so I could get my time with him, I kept getting more and more nervous. A lot of people don't realize how shy I actually am in person. When I met Everth Cabrera for the first time, at FanFest a few years ago, I froze and barely said two words to him as he signed my baseball. Anyway, I was psyching myself out while trying not to psych myself out, when finally Cashner finished his interview and it was my turn to meet him.

I was surprisingly calm during the few minutes I spent with him. First he stood up and we took a picture together. I already know I'm short, but standing next to Cashner made it even more apparent. 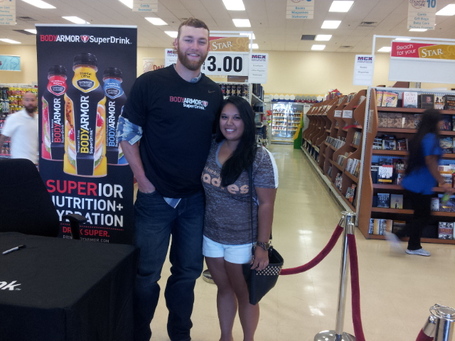 I handed him a ball to sign and he asked if there was anyone he'd like to address it to. I spelled out my name and as soon as I did I thought to myself, "I should've said 'jodes'!" But it was too late. Not a big deal though. Check this baby out. It's a beaut. 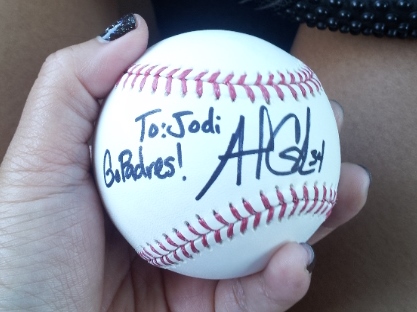 As he was signing my baseball, I started talking to him about the duck calls at Petco Park. He laughed and said he thought it was really cool. So I took my own duck call out of my purse and said, "I know this is kinda weird, but would you sign this too?" He laughed again and said "Of course! That's hilarious!" 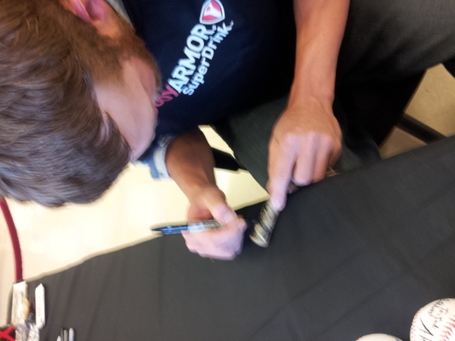 Not only did he sign his name on it, but he scribbled, "Aim Small Miss Small," which I had recognized from the movie The Patriot but now realize must also be a common hunting mantra. 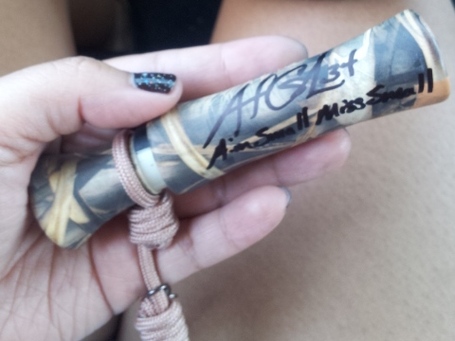 Cashner handed me my signed memorabilia and shook my hand once more and told me to have a good day. I thanked him and went on my way. And by "went on my way" I mean that I sat in my car for 20 minutes in shock of what had just happened before remembering how to talk and move my limbs again.