Share All sharing options for: Padres Win With Pitching And The Three Run Homer Thanks To Stults And Hundley

After enduring about a year and a half of some pretty suspect pitching, I think Padres fans could grow used to seeing more mound performances like we have seen lately. For those that love a good southpaw slinging it, you were treated to a gem from Eric Stults tonight. Unlike the last couple of game versus the Dodgers, the Padres were able to put some runs on the board to support the stellar Stults.

The Padres got on the board first with a couple of well timed knocks in the bottom of the first. Chris Denorfia led off the game with a single and then moved to second base on a ground out by Ronny Cedeño. It was an odd play as Diamondbacks second basemen Aaron Hill faked a throw to second before throwing to first. Arizona pitcher Brandon McCarthy, who had put a lot of zeros on the scoreboard versus the Padres this season, struck out Jedd Gyorko to bring up Chase Headley with a clutch 2 out situation. Headley came through with a single to center.

The snakes would score right back in the second when after 3 straight singles Stults appeared to be in trouble. He got the next batter out and almost got the speedy Adam Eaton to ground into a double play, but the fleet footed center fielder beat out the back end and a run was plated for the opposition. Stults would not allow another.

The next few innings flew by with both pitchers dealing. Only a couple of singles broke up the repetitiveness of out after out. That pattern would stop when the Padres batted in the bottom of the sixth. Headley and Tommy Medica would scatter two one-out singles and Blanks would move them up again. The set up for some more 2 out magic was in place. With Nick Hundley at the plate, McCarthy hung a fat breaking ball that the Padres catcher absolutely crushed. The only question was fair or foul, but as it hit the Western Metal Building everyone knew. It was a 3 run bomb to give the home team a 3 run lead.

There would be a bit of a scare in the top of the 7th as Stults' night ended after a Cliff Pennington double and an Eaton walk. Nick Vincent would provide ample relief out of the pen getting Gerardo Parra to pop out and striking out DBacks slugger Paul Goldschmidt on three pitches. Luke Gregerson and Huston Street would quietly close it out from there to earn Eric Stults his 10th win of the season.

A pretty stress-free solid win. That is unless you had to stress eating 3 lbs of meat from Phil's BBQ like jbox did. 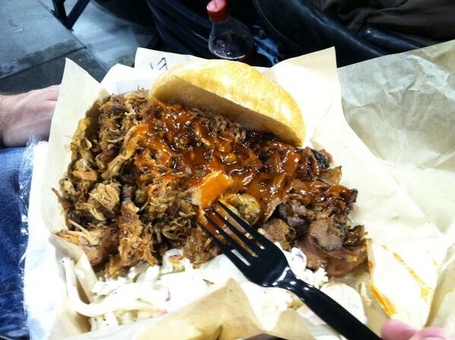