Happy birthday to Jedd Gyorko, who turns 25 today. I hope the Padres do nearly as well on his twenty-fifth birthday as they did on mine.

Today's birthday card is actually two different cards, but they're so similar that they're practically the same thing. I could have selected a card of him that doesn't have a doppelganger, but then I wouldn't have had an opportunity to gripe once again how much I've come to hate the seemingly endless parade of parallels that Topps makes of every last card in every last line.

For instance, of these two, neither of them is his 2011 Bowman Prospects base card. One is the Chrome parallel and the other is the International parallel. And it doesn't stop there. Purple borders, orange borders, on and on... all of the same card. Don't get me wrong, there is something neat about having a binder page full of the same card with slight variations from one to the next, but it's such a cheap and lazy gimmick by the manufacturer. They know that us collectors are basically crackheads and that we'll chase down every stupid thing they crap out, just because. Topps is basically no different than a heroin dealer waiting for an NA meeting to let out.

All that said, I really do like the International edition and I think you know why. Country roads! No, seriously, that's a map of West Virginia in the background. Well, there's a little Pennsylvania where his head and throwing arm are and his left elbow is in a sliver of Maryland, but it's still mostly West-By-God.

The backs of the cards are of course the same. It provides a lot of good information about him for the casual collector, but nothing most Padres fans don't already know. 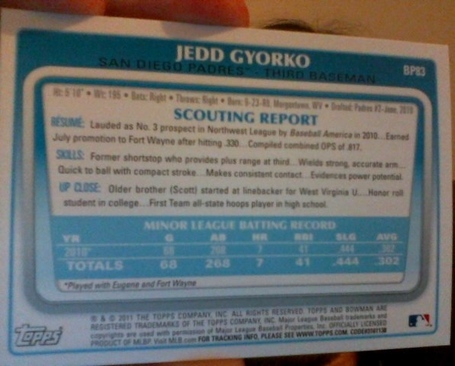 Not only did Scott Gyorko start at linebacker for WVU right after the turn of the century, he was pretty darn good. He was a favorite amongst us Mountaineers fans all four years he spent in the old gold and blue. While a lot of that was that he was a local, that only goes so far. He was a hard worker who got results and fans everywhere like that. Like Jedd, he was also a two-sport star in high school... hey, wait, it's not Scott's birthday. I guess I'll just wait until May 20 to write more about him somewhere else.