Josh Geer leads Missions to Texas League title, leads me to dig out an old baseball card of him

Share All sharing options for: Josh Geer leads Missions to Texas League title, leads me to dig out an old baseball card of him

Today Josh Geer got his name back in people's mouths for the first time in a while, as he pitched five shutout innings in the deciding game of the Texas League Championship. It's been quite a journey for Geer since 2009, when he last pitched in the majors. He's struggled in AAA, missed a season while kicking cancer's ass, struggled a bit more because he was rusty due to missing a season kicking cancer's ass, and then settled in to have a good season with San Antonio this year.

I was pretty sure I had a Josh Geer card around here somewhere, as his brief stay in San Diego was around the same time I was getting back into the hobby. Sure enough, I dug up his 2009 O-Pee-Chee card. Some of you might recognize the O-Pee-Chee name. They are best known for making the French-English bilingual versions of Topps cards back in the day. The following photograph is for reference purposes only, and absolutely not because I will look for any excuse possible to show off my Joey Cora collection: 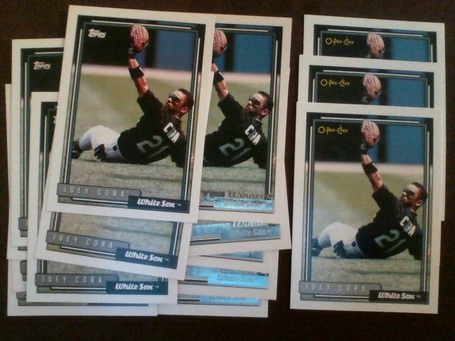 There, now you know what I'm blathering on about. But by 2009, the O-Pee-Chee name had been bought by Upper Deck and converted into a standalone line. I really liked the design; it was old-timey without being derivative of anything in particular. The backs of the cards fit the same description: 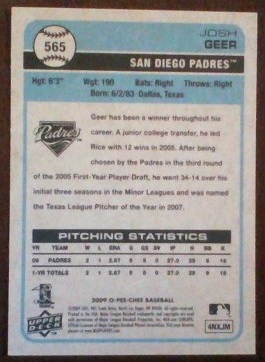 As you can see (Maybe? If you squint?), Geer had a very good small sample size in 2008 with the Padres. He was 2-1 with a 2.67 ERA in five starts. Unfortunately, he got lit up in '09, which led to the aforementioned struggles in AAA. See what I did there? Full circle like Pennywise. That's quality acceptable writing.