So Jbox and I attended the Padres Yankees game yesterday. We knew it would be crowded so we got there early and meandered around. After some chit chat with the usual peeps we started heading to our seats. Near the K street/gaslamp entrance an usher sprints towards me as security watches from a close distance. She starts going on and on about how I can't wear the shirt I was wearing. At first I thought she was joking, I really thought she loved the shirt so much she was just acknowledging it. Turns out I was wrong and had a choice to turn my shirt inside out or be thrown out on the street. According to security I had already been warned once. Well I hadn't so there was obviously somebody else with the same great taste in T-shirts.

I really contemplated what to do. I even asked Jbox if I should just let them throw me out. He advised against it and the usher strongly advised against it. So I caved and did what I was told even though it really was eating me up inside.

Let me start off by showing you the shirt in which I was wearing. Max the cat here is modeling the front. "YANKEES SUCK" I think we can agree that we've all seen much worse at Padre games. 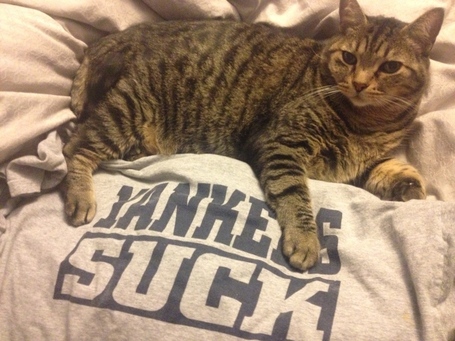 The back of the shirt "JETER SWALLOWS" Maybe it's a bit crude, but let's be honest I'm sure he does. Seriously though, I think most every adult would get a little kick out of it. And it's going to go over any kid's head that bothers to even read it. 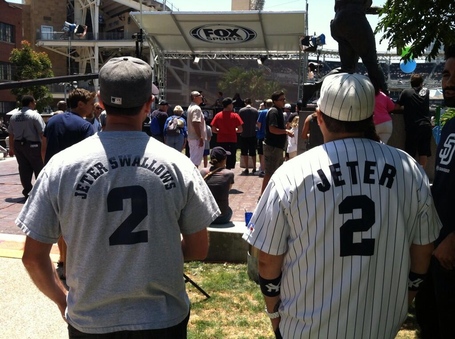 Now I'm not going on some Free Speech rant, and I hold no ill will towards the usher and security as they were just doing their job. There is a time and place for the Padres organization and their security to step in and keep truly vulgar and offensive behavior at bay, but this was not one of those times. The actions that were taken today have the opposite effect that I think the organization would want.

A couple years back the Padre organization was telling us how San Diego fans don't really have the identity that say a Cubs fan or Packers fan would have. How the Padres lack the intimidation factor that comes from the fans. Not that we didn't already know this, but many from the front office were interested in changing that perspective. We all know there are a thousand reasons why are fan base is so relaxed. And while I'm not saying we need to start taking out people in the parking lot, it would be nice if we as a whole weren't such pushovers. And I for one, am as guilty as can be. I turned my shirt inside out like some scared second grader.

About ten years ago Kev gave me this shirt and I waited for this very day to wear it. It felt so good, I felt part of something bigger. I've never felt such a comradery as I did while wearing this shirt. I was getting high fives, recognition, even Yankee fans were amused. And of course I was getting a lot of head nods. You know the ones, that nod where they are really saying is "This is our town! This is our team! and to hell with all you Yankee fans!" I even got that nod from the ticket scanner guy as we walked through the gate.

So in some sort of way this was my attempt to take the fight back to all those opposing fans. I'm tired of being out numbered at home. I did what I could to support and defend our Padres and then I was shot down by the very team in which I defended.

You can't blame Yankee fans or any other opposing team's fans. If you are going to pass out free sunshine and cookies to the opposition and their fans you are never going to have a home field advantage.

So what's it going to be Padres?