The Jersey once again finds itself in the valley of the sun its home away from home. This time it begins the journey both symbolically, and I’d like to pretend literally where the jersey began. The locker is from the spring training home of the Padres in Peoria, rescued much like the jersey, before it met its end in the garbage forgotten by history. Now it is home to my hockey gear and for a short lucky while the Jersey. 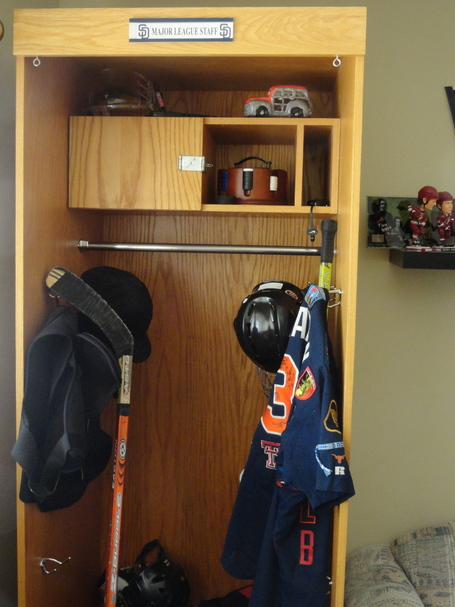 If you live in the Phoenix Metro area you basically spend your entire summer trying to find ways to stay cool. I moved here from San Diego 13 years ago, and dry heat or not 113 is still 113. So my wife and I decided to head up north to the world famous Red Rocks of Sedona and go for a nice hike. It’s a short two and a half hour drive to get from 113 to 80 and is pretty popular with the locals. On our way up we decided to stop at the Rock Springs Café in Black Canyon City. 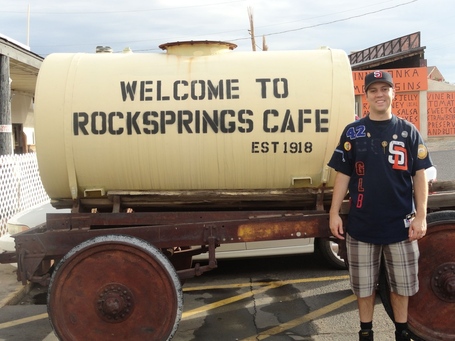 Now in Arizona there are a lot of phony old west towns, restaurants and cowboys, this is not one of those places. Established in 1918, Rock Springs Cafe has been a general store and restaurant continuously since that date. The store started by a young Ben Warner was just a tent and supplies to sell to miners. He built the adobe blocks that became the walls of this place in his spare time. "World Famous" today for their pies that they ship all over the world the place is truly a slice of Americana. We arrived just as they opened on a Sunday at 7am. When we got there only a few locals were getting breakfast at the time. Now to say these men merely looked like old cowboys would be a disservice to them. As we looked over the menu, my wife noticed that all the cowboys were all eating biscuits and gravy and wisely she followed suit, I foolishly thought I knew what I was doing and ordered the eggs and bacon. It wasn’t even a contest the biscuits were to die for and the eggs and bacon were merely serviceable.

The walls here are dripping with history with signs from the original building and old timey pictures full of family photos of long dead stars from the golden age of cinema. Now this is where things got really surreal…another cowboy walks in and they all begin to discuss panning for gold and their luck in the mines they have on their land. This wasn’t just some passing conversation they were going over the methods of their panning and what they had found in this stream or that river. Was the jersey in fact a time traveling device like the train driven by Doc Brown in the old west (1.21 gigawatts!?!)? I left the restaurant shaking my head and the magic the jersey had bestowed upon us. 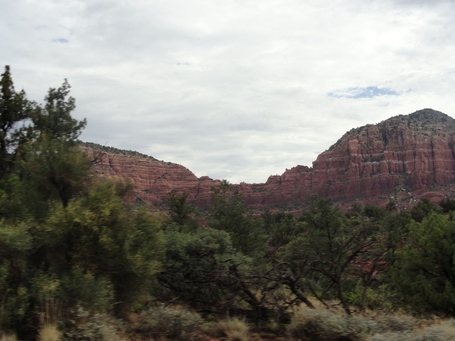 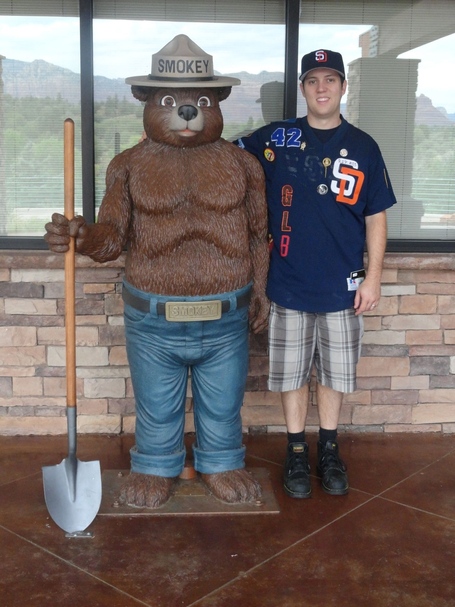 We got to Sedona around 9 am and luckily beat most of the crowd. We didn’t really know how long the hike known as the West Fork trail, was it was just suggested to us so we went. Now normally an 8 mile hike would not have been too bad. However, a 6000 foot elevation change combined with biscuits sitting like a couple of those adobe bricks in my gut made it an adventure. It was also crazy humid so I took the jersey off and kept it in the backpack to spare the next sister from my stench. As you can see from the pictures below it was absolutely gorgeous. The hike ends at a stream cutting directly into the red rocks. 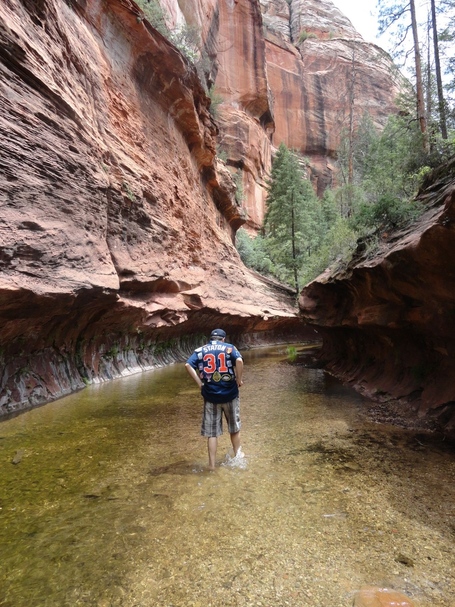 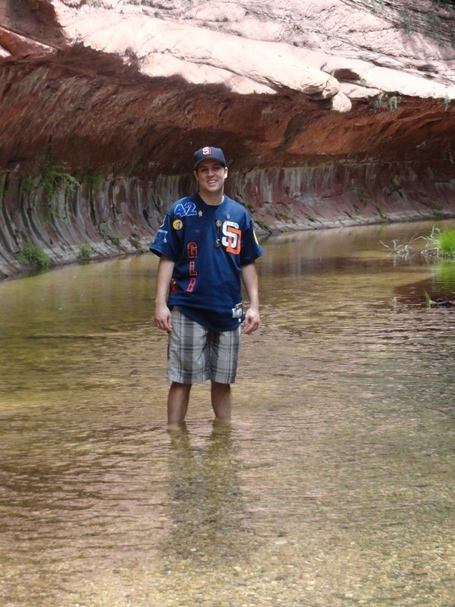 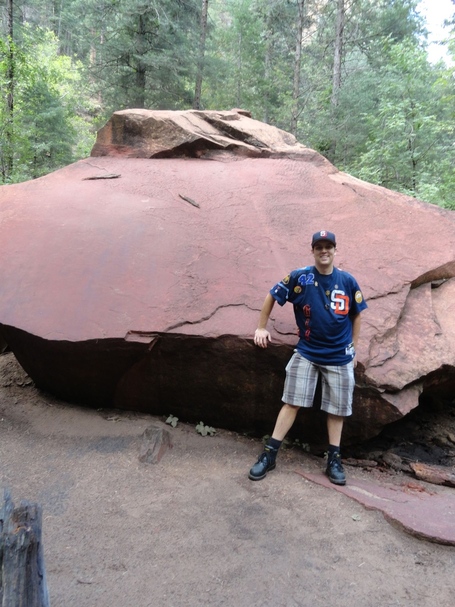 On the way home we stopped at a brewery that I always wanted to go to but rarely have the chance. Oak Creek Brewery in located in Sedona and is known for their Nut Brown Ale. A Nutty, slightly sweet ale it goes great with a burger or brat. Since I was at the Brewery I decided to go with the flight. I enjoy wheat beers of which their seasonal vanilla wheat was especially good after the hike. 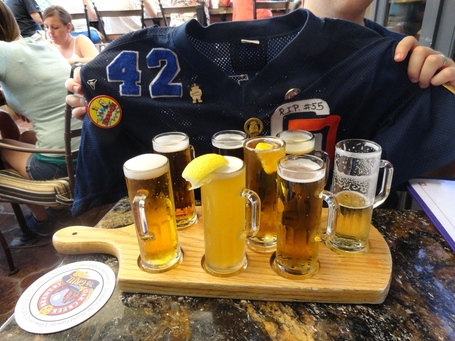 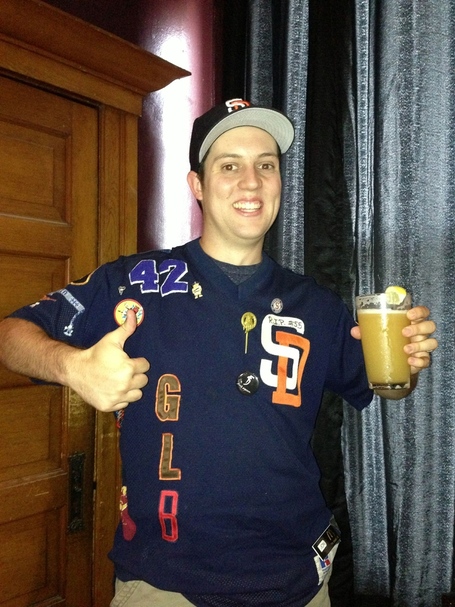 We then stopped back at Rock Springs to get some pie. What a difference a few hours makes. The place was a mad house full of people heading back down south. We got our delicious pies and hit the road back home. 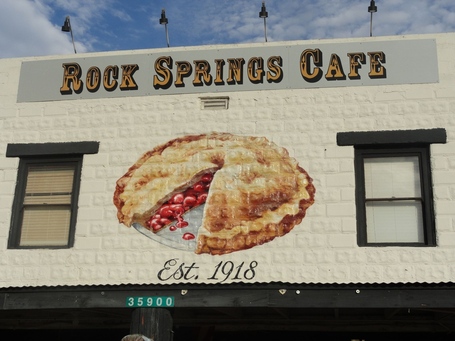 It was a quiet week for the Jersey as I went to work and waited for the battle against the D-Backs to commence. I packed the jersey, a change of clothes and the tickets for both Friday and Saturday’s game with me to work; this will come into play later. I get off of work and I’m driving down the freeway and my radio just shuts off, then my AC turns off, this is a bad thing since it’s monsoon season here now so it’s 110 and about 70 percent humidity on this fine day. I pull off the freeway and my car is now going full freak out. I look to the jersey desperately and plead for its protection but to no avail. My car breaks down next to a cemetery and across the street from a gas station. I push my car in the unholiest of unholy heat into the gas station and call for a tow (thank god for AAA). I ditch the car at a shop and catch a ride to downtown with a friend going to the game. We stopped at the Rose and Crown before the game to grab a brew. I got a 4 Peaks Hefeweizen; which is brewed around the corner from my house on 8th st in Tempe. It’s great on a hot day especially after pushing a vehicle. 4 Peaks is the most popular craft brewer in Arizona and you may be seeing them soon in California as they a looking to expand. I recommend the Kilt Lifter an Irish Ale or their Golsch which is another hot summer day brew. 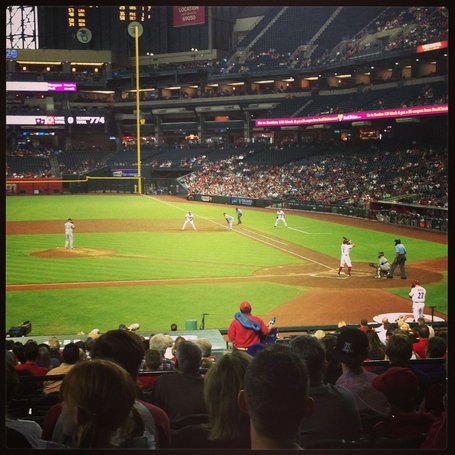 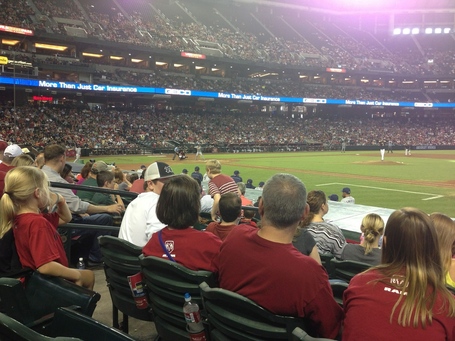 I won’t bother going into the details of the game but needless to say the Sonoran Hot Dog was the highlight. It’s become the drunk food of choice for some in AZ lately and it’s a bacon wrapped hot dog with sour cream, salsa, pinto beans and green chilies on it. The one at the ball park was $7.50 which was steep but what can you do? The bring back the brown patch was also popular among the Padres faithful in attendance. 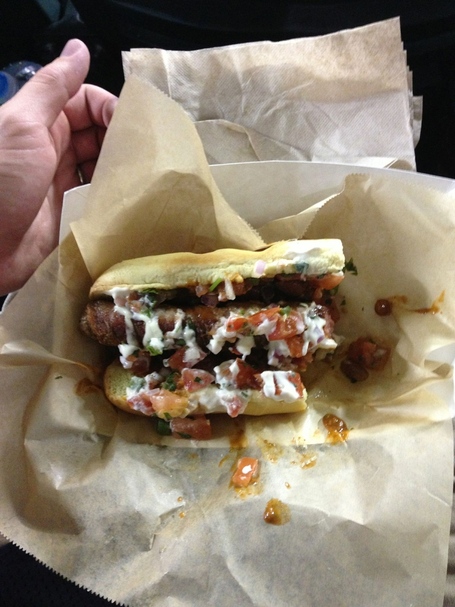 After the game we went to Seamus Mccaffrey to drowned my sorrow in more 4 Peaks and try and forget this horrible day.

The next day I awoke to find my saint of a wife doing my dirty laundry. Now usually this would be no problem but unfortunately this time it had four, 12th row tickets behind the visitors dug out in the pockets. 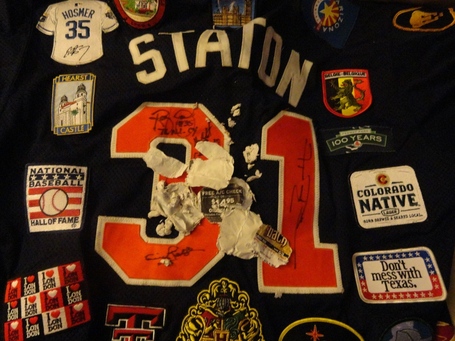 After the night before I was starting to seriously think I had sucked all of the magic out of the jersey and was now cursed. A trip to the box office and a humiliating explanation followed by laughter, a call for a supervisor and more laughter got rid of my fear. The game that night a doozey for sure with Cashner hitting his first HR. It. Was. Glorious.

Sunday was my final adventure with the jersey I took it to my beer league hockey game, another day another locker. 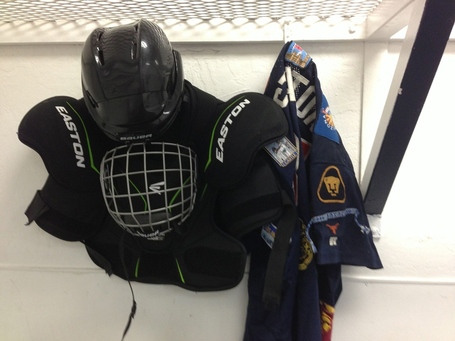 We lost the game but the Padres won the day and the series. Go Friars Keep the Faith!