Share All sharing options for: Let's Talk About Pets, Baby

About a week or so ago I got a huge box full of Padres memorabilia in the mail from RJ's Fro. He just sent it out of the goodness of his heart, and when I say it was huge I mean it. He had told me he was going to send some cards and a John Kruk mini-bat but I had no idea what I was in for. There were tons of cards, literally a dozen posters, hats, pins, a clock (!), a beach towel, and even more. You name it and it was probably in that box, but I'll get to that other goodness at a later date; right now I'm going to focus on one of the things he included. Well, ten related things he included: 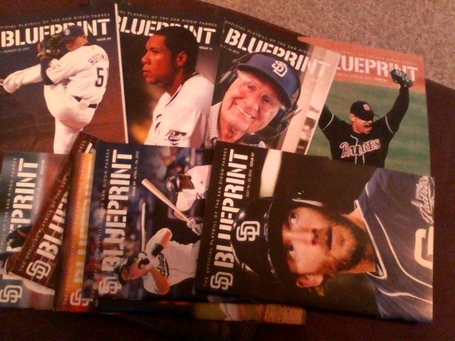 That's Blueprint: The Official Playbill of the San Diego Padres, but you already knew that. 'Fro sent ten recent issues and I leafed through one of them until I got to the Petco Pet Profile. I read it and then immediately flipped to the Pet Profile in every other issue. Each one features a Padres player or someone related to the team with their pet and a series of questions about their pet. The thing is, all of their pets are dogs! I mean, I'm all about some pwetty wittle puppies, but come on. Show cats some love. 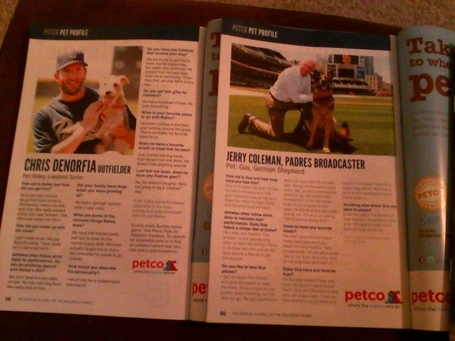 Are dogs seriously that much more popular than cats? In the interest of fairness to cats and cat people, I'm going to answer the typical Pet Profile questions about my cat. I might not be as rad as a Chris Denorfia or a Tim Stauffer, but Cora is just as cool as their tongue-wagging ankle-biters. 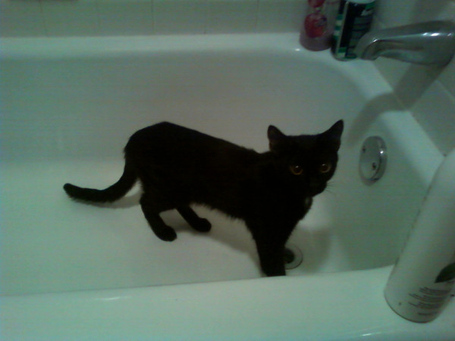 How old is Cora and how did you get her?

She's three and I got her at a bodega. No lie. I went to a convenience store to get some morning beers and there was a cage of free kittens by the door. Of course there was. The place was so gully that they sold loosies and "incense", so it only made sense that they were getting their cat hustle on too. She was the little runt cast off to a corner so I felt bad for her. I didn't even really like cats; it was just pretty much a pity move at the time.

How did you come up with her name?

She is named after Joey, and to a lesser extent, Alex Cora. Oddly, Alex Cora got released by the Rangers about an hour after I got her and named her. I vaguely recall that Dagwood Bumstead's boss's wife's name was Cora, but that didn't really play into it.

Athletes often follow strict diets for performance. Do you do anything special for her diet?

Not really. She's spoiled when it comes to food, though. She always has two kinds of dry foods out along with a can of wet food. Also, she doesn't trifle with tap water.

What is her favorite snack or treat?

Like Huston Street's French Bulldogs Major and Mia, she goes nuts over cheese. It's not the best thing in the world for a cat so I only let her have it very sparingly. She loves yogurt so much that I can't eat it anymore because she won't leave me alone when I do. Last time I ate yogurt, I had to shut myself in the bedroom and it just wasn't worth it.

How would you describe her personality?

The same way anyone would describe their pet's personality, I guess. Loving sometimes, playful others. Incredibly loyal and fairly clingy.

Do you have any hobbies that involve your pet?

We like to play ball. I'll roll it to her and she'll dive for it and roll it back. She's a natural!

What's the funniest thing your pet does?

She stands on two legs to get me to pet her if she hasn't seen me for like ten minutes, but that's more precious than it is funny. It's pretty hilarious when she "swims" on the carpet; she just lays on her side and drags herself with her front paws.

Last but not least, does she have any Padres gear?

Like bullpen catcher Justin Hatcher's boxer Diesel, she has a Padres ball she plays with but nothing she wears.

There. That was fascinating to absolutely nobody other than me. Now here's where you come in: Share a little something about your pet(s)-- cat, dog, iguana, whatever-- in the comments, be it a picture of them in a Padres bandana or something, or answering some or all of the questions above. Or, you know, whatever.