Today's birthday card (see what I did there?) is of Carlos Quentin, who's turning 31. I have a decent amount of Quentin cards but chose his 2012 Topps Heritage (based on the classic 1963 Topps set) because there's something amiss on the front of the card. Take a look at it and see if you notice what's wrong.

Did you spot the screw-up?

If not, look closely at Quentin's jersey. See it now?

Yep, yet another example of Topps's faulty Photoshopping and awful airbrushing over the years. That jersey he's pictured in has actually never existed. Quentin came to the Padres the same offseason that they switched from the sand-colored drop shadow on the letters to an outline. Topps's digital manipulator got that part right but failed to add in the piping, or "headspoon". Oddly, they made the exact opposite mistake on Huston Street's card in the same set. 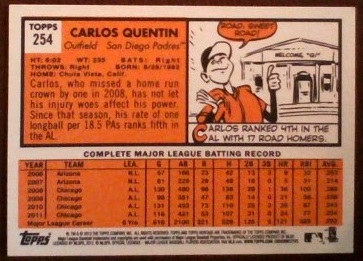