This is the last post about Padres Blogger Night, thank goodness.  I just wanted to show off some of the new giveaway items that were previewed for us, if you didn't already see them on our Twitter account (@gaslampball).

These will be available tomorrow, August 23rd, for the first 25,000 fans.  You'll randomly get one of three bags.  If I were you I'd be pissed if I missed out or got the one that looks like the team's current jersey.  They look cool up close, but they're a little small.  They'll fit about the same amount as most plastic grocery bags, but most reusable bags are bigger.  Still it's a cool idea. I just need about 10 of the throwback ones. 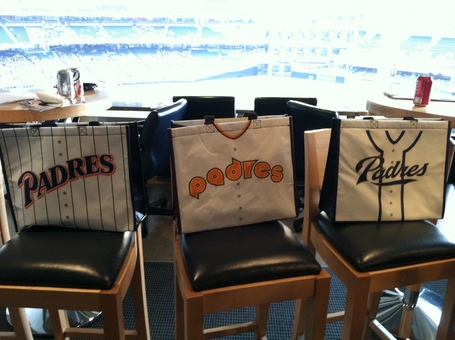 The Padres ballcap will be available to the first 25,000 fans on Saturday, August 24th. This was the one giveaway that we were allowed to take home with us.   I already gave mine away to my friend's two year old.  He wore it to last Saturday's game.  He got like 3 comments on it because it hadn't even been released to the public yet.  I'm not really a fan.  It looks like something a tourist would buy at a gift shop in Seaport Village.  Very generic and you can't even tell it is Padres related until you see the Swinging Friar logo on the back.  They should have put the Friar on the front, then they'd have something. 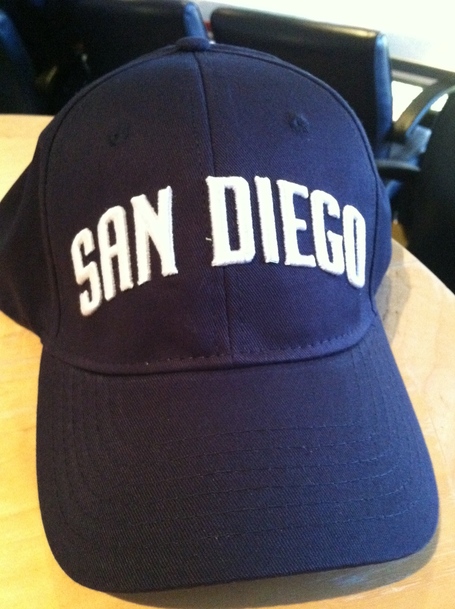 The flip flops were given away last Saturday, I got a pair.  They're a great idea but they're made for people with really long feet but really short toes, so they fit people with really attractive feet (like me) kinda weird.  Still they'll make a good shower shoe at the gym.  I'll use these when I surf on hot days.  I'll use them to walk on the hot pavement and then bury them in the sand while I paddle out.  If I can't find my buried treasure later on, no big deal.

I've got the original Luchador Mask from back when they did a cross promotion with Nacho Libre.  Surprisingly I don't wear it that often.  I can't imagine I'll be wearing this one much either.  It will be available on September 7th. 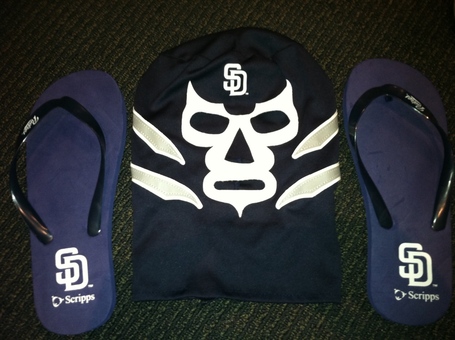 I'm not a scarf person... at all.  I know some of you are though.  This one is double sided.  One side supports Tijuana's Xolos soccer team and the other, the Padres.  Yep. 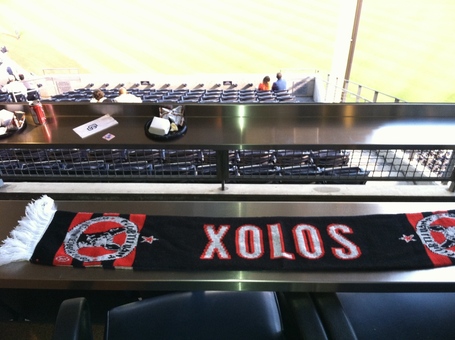 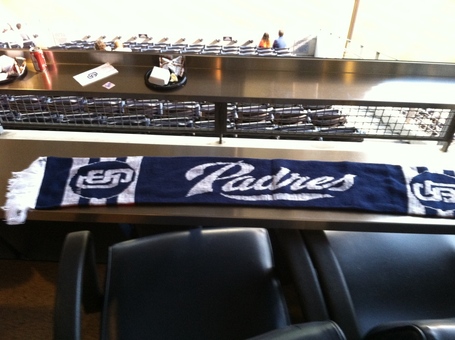 This is a ringer tee, though you can't see it in the picture.  It's a cool design.

"We root for the the home team in flip flops and so does our mascot."

I'd wear it and I wouldn't even be embarrassed to wear it. 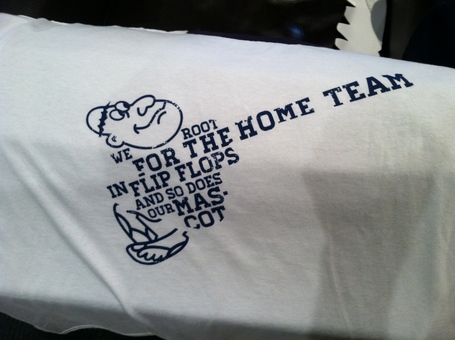