As we stood in foul territory in front of the Padres dugout, we watched batting practice and killed time talking to old friends and new.  This, after all, is where the media elite hang out and for one night, only retractable belt stanchions and a considerable amount of talent separated us from them.

Bob Scanlan was the first to approach us.  He's taller than I remember and I remember him being really tall.  Head Grounds Crew guy Luke Yoder stopped by too.  I couldn't take my eyes off his sculpted calves.  He "fielded" some questions from us. I waited for a private moment with him so I could bring up my suspicions that the Dancing Grounds Crew guy isn't doing his fair share of work, but it never came.

Next was Fox Sports Host Laura McKeeman who made us all really nervous because as bloggers we aren't use to talking to pretty girls.  I really wish Fox Sports San Diego would give her a chance to fill in for Dick Enberg for a game.  Her skills are polished.  You never hear women in the broadcast booth and I think Laura could do it with ease.

I thought my eyes were playing tricks on me.  Former Padres Channel 4 Host John Weisbarth approached from the ether of the visitor's dugout.  I'm only slightly exaggerating when I say I leapt into his arms.  He was doing some field work for the Mets.  He seemed happy to see us, but insisted that next time we just do the "bro hug" instead of me wrapping my legs around his waist.  I miss him.

Padres beat writer Corey Brock stopped by and shook our hands.  You should know that Corey has really soft hands.  He also has the kind of personality that makes me wish he was a more frequent radio/TV guest.  I still think he and Laura should team up and do a podcast.

Speaking of @PadsCast, Andy Masur was there too and is maybe the nicest guy ever and that's coming from me, the guy that everybody agrees is really nicest guy ever.  He told us horror stories of parking near Wrigley Field.

I called over Fox Sports Reporter Kelly Crull who was catching up with a friend in the dugout.  She didn't answer to "Laura" the first three times I called to her.  Once I started using her actual name, she came over in a jiffy.  I heart her.

I was leaning against the dugout fence when Jaff Decker sidled up beside me.  I was caught off guard.  I asked him a question about his neon Phiten bracelet, it was the first thing I noticed.  "Do you believe in the power of titanium bracelets?"  "Nah", he said, "I just like the way they look and I got a hit after wearing it the first time."

Friarhood asked him a serious question that led to an answer where Decker admitted that he thought "For Love of the Game" was a great movie.  I couldn't contain myself and groaned, "Ugh, that movie sucks."  He and Friarhood tried to convince us that it was a baseball movie with romance and not a romance movie with baseball.  "Whatever dudes."  Decker kept up his defense saying that romance like that was part of the major leagues.  That intrigued me, but he didn't expand upon it to my chagrin.

I told him that Bud Black had commented on his long hair on a recent radio interview with Darren Smith.  Decker said that he and Casey Kelly get teased about their hair in the clubhouse.  They both have T-Shirts that read "Mucho Flow".  I got to get me one of those.

Decker was starting that night so had move on.  Good dude that guy.

We exited the field and ran smack dab into Padres Broadcaster and Hall of Famer Jerry Coleman.  He made a jovial comment about us, he said he was hoping we weren't "the enemy".  I'm not sure if he meant the Mets or if he was having a flashback to his days of aerial combat.

It was then that we saw a new store nestled behind the Sony Dugout Home Plate Club.  There sits an upscale store that sells really expensive Padres merchandise.  More expensive then the regular expensive merchandise.  RJ's Fro and I raced to take a picture.  It's a really weird place for a store.  Because of its location it's probably seen by, at most 50 fans a game.  Sure they're the rich fans, but is this where they'd come to buy purses and handbags?  Is this the types of investments we can expect from the new ownership??  I already see this as a black eye for Fowler and company. 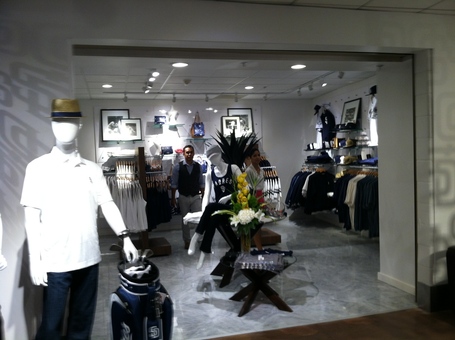 In Part Three we'll visit the suite and make even more friends.  Making friends is what we do.

The life and times of Kelly Crull