We were invited to the first Padres blogger night of the season. There were 7 of us in total. Two bloggers from Friarhood, three from Padres Public and me and Jonny Dub from the GLB. They kept it small this first time but said they plan to host a few of these nights a year and rotate bloggers of all different shapes and sizes. So if you're a fledgling blogger and can survive the long winter, maybe you too can participate in the festivities. Better yet, blog your heart out a few weeks prior to the event and go into hibernation until the next one.

I'm practically always ashamed, embarrassed  and alone as a Padres blogger, but for a few hours last night that changed. I felt embarrassed and ashamed in the company of others, it was great.

The night kicked off at 3:45 sharp. The rules were clear, you miss the cutoff, you miss out. A few of us showed up early but everybody made it on time. Inside the VIP entrance, Padres Manager Shana introduced herself. She handed us our tickets, temporary field IDs and insisted we call her by her beloved nickname "Sugar Shana" or "Sugar" for short. Will do.

We marched through the ballpark and out onto the field. It was there we baked in the heat while watching Padres hit batting practice. Padres employees kept us in check by placing rope barriers between us and the players. I asked when they would put up the awning to protect us from the elements, but was told we would have no relief.

It's cool seeing how things work behind the scenes. Watching the coaches throw BP and work with the hitters is interesting since most of the time you only see them sitting on the bench during games. The whole team hit, but I only took notice of Kyle Blanks and Andrew Cashner. Both can hit for power. 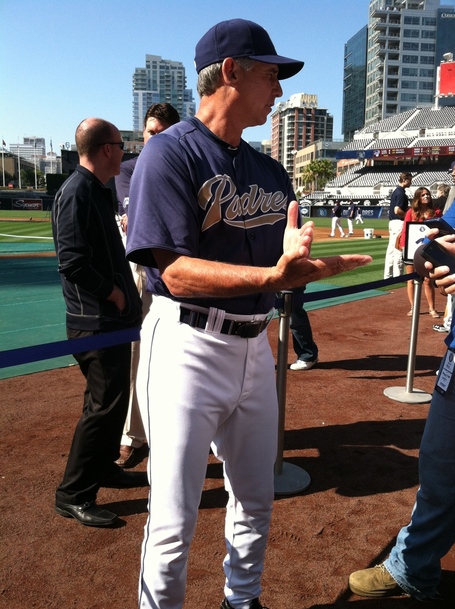 Padres manager Bud Black came over to talk to us. We were told we might be able to ask him questions in the invite. I didn't prepare any and was furious with myself. I'll say this about Black. Dude is really likable. Dex and I met him a few years back at Spring Training. Prior to our meeting I'd always make fun of how sleepy his interviews made me. Afterward I was his biggest fan. I like that he calls us "boys", almost like we're part of the club or his wily nephews. There's something about him though, if I knew what it was I'd bottle it and sell it in the Padres store.

He answered a question from Left Coast Bias, saying that they were going to try and keep Cashner pitching for the rest of the season, but to save on innings they may have him skip a start.

He told The Sac Bunt that he gets butt loads of data on players and match-ups and he digests that data in his lower intestine and then makes his decisions from down in his gut.

I asked if he often has disagreements with the Front Office on how he should manage situations. He says he is constantly in discussions with the F.O. and they are usually on the same page. If there are disagreements they are talked out ahead of time. One example he gave us was the possibility of moving Chase Headley down in the order, but with so many other hitters on DL there wasn't really anyone to replace him in the 4 spot.

I also asked him again if he planned to get on Twitter, he said he would last year but never did. He said he'd consider it, which I assume means he'll mull it over in his gut and decide against it.  We guessed at what his Twitter handle might be, I think we decided on "@OnceUgoBlack". 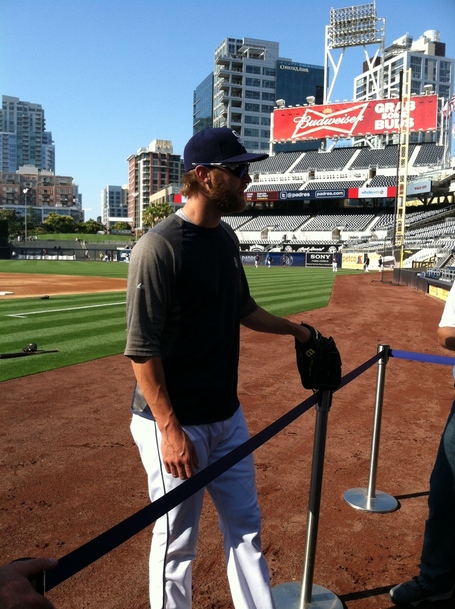 Starting Pitcher Andrew Cashner came over next. Technically we are both men, but him, more so. His thick lustrous and well manicured beard, his contempt for social media, his old timey tobacco spitting and his dry Texas drawl all make him so much more masculine then I could ever hope to be.

He was gracious in answering our questions. He answered Friarhood saying that if given the opportunity he would of course like to be the staff's ace, but he doesn't feel he's earned it yet.

He told Jonny that he did hear mysterious duck calls during one of his previous home starts and he encouraged fans to keep them coming. "I love duck calls."

RJ's Fro wanted a closer look at his injured thumb and Cashner complied. He showed us a very faint "Z" shaped scar. I didn't see anything at all but pretended I saw what everyone else did. Later I hypothesized that he was never injured in a hunting accident and it was all a cover-up for something far more sinister.