I finally got around to buying a copy of Trevor Hoffman's 1992 Upper Deck Minors card a couple weeks ago. I already had cards of him as a Marlin, Padre, and a Brewer but this is my first showing him as a member of the Reds organization.

On the front, Trevor is pictured in his Chattanooga Lookouts uniform, and their logo is on the back. He played there in 1991 and for his first six games of the '92 season. Trevor pitched the rest of 1992 with the AAA Nashville Sounds before the Marlins snagged him up in the expansion draft. Speaking of the back of the card, the picture on it is awesome. 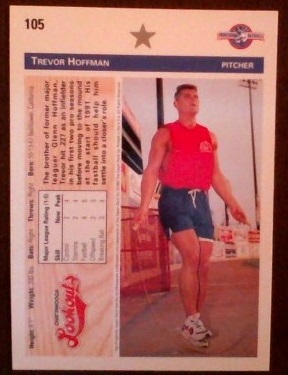 Early '90s Upper Deck had the best photography. They were the best at getting away-from-the-action and offbeat shots that nobody else was putting on cards. And if you don't feel like tilting your head like you're eating a taco in order to read the text, here's what it says:

The brother of former major leaguer Glenn Hoffman, Trevor hit .227 as an infielder in his first two pro seasons before moving to the mound at the start of 1991. His fastball should help him settle into a closer's role.