With all the bad news of late (Grandal injury, Garfinkel stepping down, the losing streak) I thought now would be a good time to brighten peoples days with an update on the famous traveling jersey. So he it goes.

It was the beginning of July and my Padres were coming to town for a 3 game series against the Red Sox. I received the jersey in the mail from fellow gaslampballer Jonathan Holmes on Monday afternoon. First of all let me just say how honored I am to have the opportunity to represent the jersey and add my experience to its legacy. When I got it in my hands I was in awe of the beauty of the whole thing. At first I was a little worried the jersey wouldn't fit. Like Kyle Blanks I am part ogre but at 6’5 240lbs. I think Mr. Staton and I are about the same size because the jersey fit like a glove. 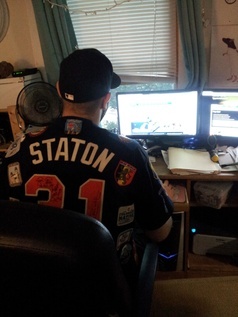 First thing I did with it was head over to my desk/ office/ work space. This is where I watch Padres games on mlb.tv, check out gaslampball daily, set my fantasy baseball teams and work on my web comic (www.couchcomics.com) I use a pen tablet to make my comics but I also like to paint. Feeling inspired by the jersey I decided to paint a little something. I thought the world famous San Diego Chicken was appropriate for the occasion. 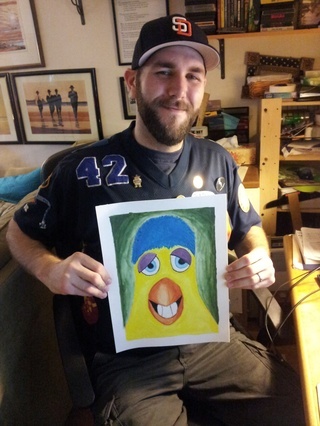 Tuesday was game day. My older brother and his girlfriend were visiting from San Diego so I asked them "Hey do you guys want to go see the padres play for 4 times as much money in seats that are 4 times less comfortable surrounded by douche bags?" I’m just kidding most of my friends are douche bags… I mean sox fans. I must admit they are my American league team I root for. Matter of fact my brother is a bigger Red Sox fan then I am, a casualty of living in Massachusetts most of our lives. He even wore a red sox shirt to the game to my disapproval. 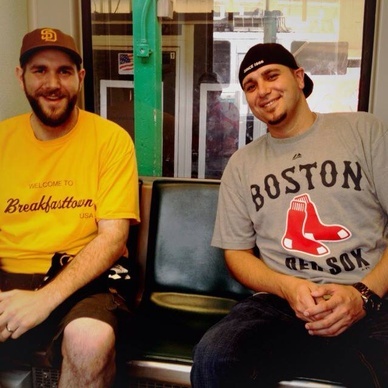 Here we are on the T on our way downtown. notice the excellent shirt I'm wearing

So we headed into the city to meet my wife when she got out of work. She works in the Federal building in government center so while we were waiting for her to get out we went down to Faneuil hall. I figured I should take the jersey to "the Cradle of Liberty" where our forefathers began the march towards independence of this fine country of ours. 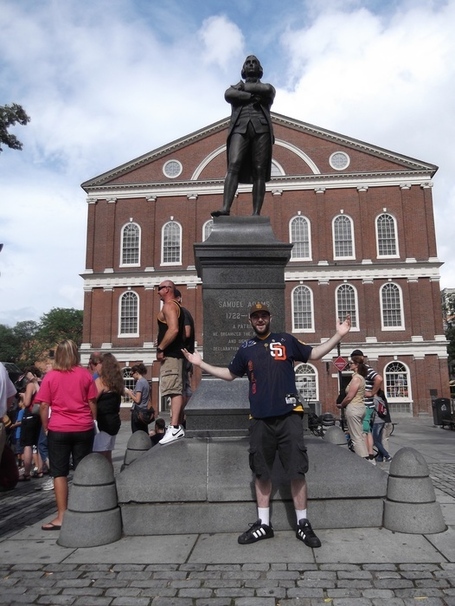 Here’s a picture of the jersey in front of the Samuel Adams statue.

I got a Pin to put on the jersey in the marketplace. I thought it was pretty cool. 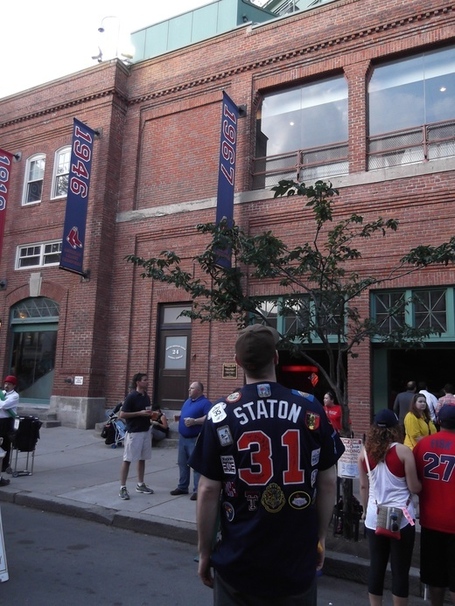 We got to Fenway a little bit later then I hoped to. We got to Yawkee way 15 min before first pitch. I’m sorry to anyone that was hoping to meet up before the game to see the jersey. I went into the pro shop in search of a Fenway park patch or Boston Strong patch for the jersey. No dice, all they had were Boston B patches. I thought those were lame so I decided to buy a Fenway 100 years beer cozy. I’ll just cut it up and have the wife put her Girl Scout sowing skills to use. 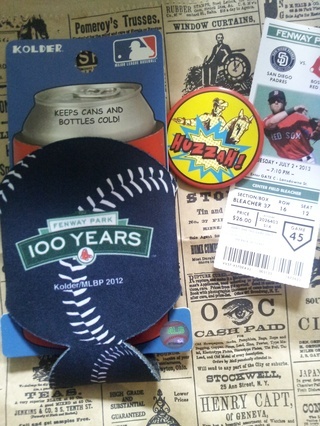 You've got to love the history that comes with Fenway. We walked by this display about former players that served for the military. They had former PCL padre Ted Williams jacket from those day. 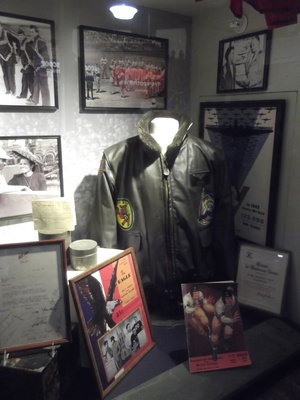 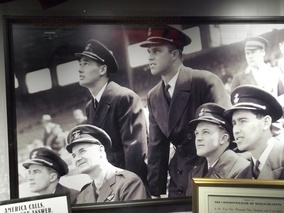 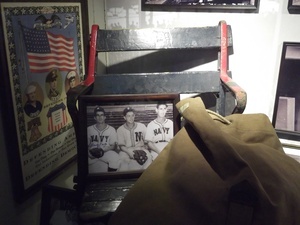 However the history doesn’t make up for how awful the seating arrangement is. Like I said earlier I’m part ogre and the seats don’t fit me so well. My knees were in the back of poor guy sitting in front of me. My brother accidentally hit the guy in front of him and made an enemy for life. This is why when I go to Fenway I’ll just get standing room tickets. 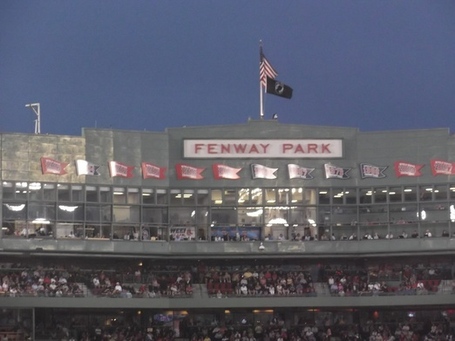 We got to our uncomfortable bleacher seats for the beginning of the game. I received lots of compliments about how cool the jersey was and high fived any padres fans I passed by. 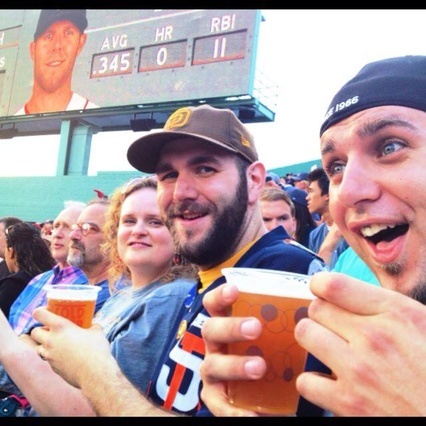 That is my wife Crystal next to me you can't see in the picture but I made her wear a padres shirt. She isn't a big baseball fan but she loves me. I don't know what my brother is doing there.

All in all the game was pretty boring. Robbie Erlin made his 3rd career start vs. John Lackey. It felt like every Red Sox batter took the count to 3-2. Even when Guzman hit his home run, the only home run in the game it was unexciting because they called it a double at first. I think the only highlight from the night was when Pedroria was thrown out at home and even that play was lame because it was a blown call and he was actually safe. So the Padres lost 4-1 and that ended my win streak since 2009 for padres games I've attended. Bummer

Wednesday my brother needed a ride to the airport so I thought this would be a great opportunity to take the jersey through the Ted Williams Tunnel. 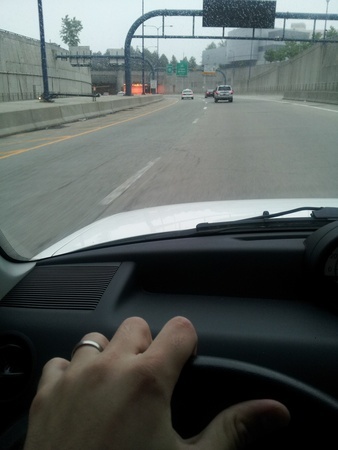 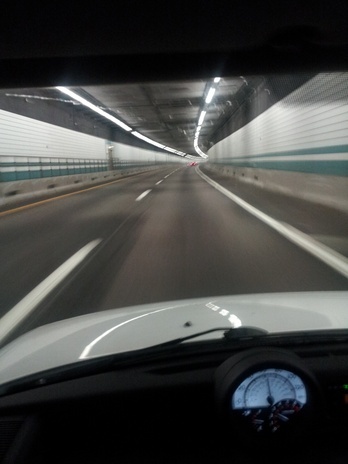 Unfortunately I was driving too fast to get a picture of the Plaque that’s at the beginning but thanks to the magic of the internet this is what it looks like. 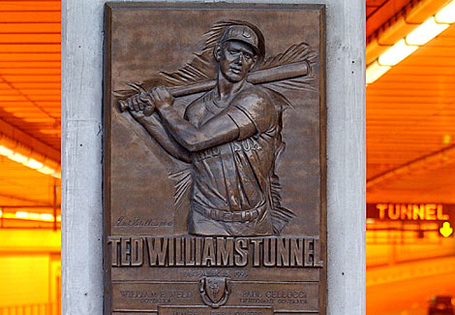 YFI the speed limit in the tunnel is 45 MPH. About a year ago I got kicked in the balls with a $200 speeding ticket. Hard to believe that we are under the ocean here or excuse me, we don’t have an ocean in Boston we have a wahtah front.

I always thought that Ted Williams and I had a lot in common. I grew up just blocks from where he grew up in Normal Heights. He lived on Utah St. I lived on Idaho St. We both somehow ended up in Massachusetts only to never return to our hometown, and we both have 521 career home runs… oh wait that’s just Teddy.

Thursday was the 4th of July and like most Americans I spent the day having a barbecue. I headed south with the jersey. My wife has family that lives in New Bedford on a beautiful house right on the beach. Fun fact I learned that day is that Irwin Jacobs the co-founder and former chairman of Qualcomm is originally from New Bedford and still owns a home there. 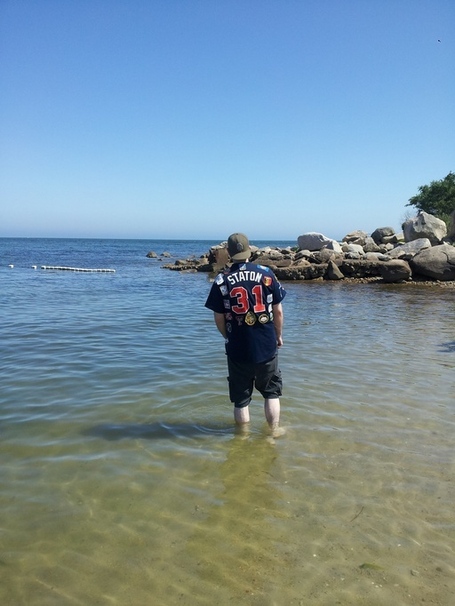 We sat around listened to the Padres lose yet another game to the Sox on the radio, ate some good food and headed down to the beach. Here is a picture of the jersey taking a dip in the Atlantic Ocean try not to look at my super white legs you might go blind. 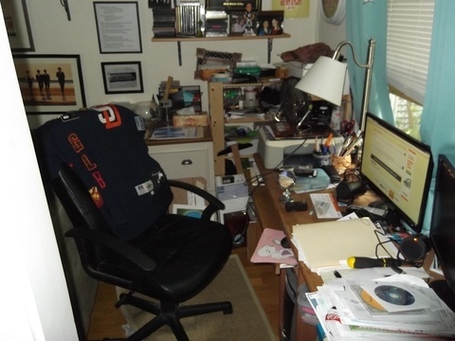 It was back to business for me after the 4th. My vacation was over and I had to get back to work. We were in the middle of a heat wave so instead of putting the jersey on and getting it stinky with my man sweat it just chilled on my chair for a few days until I could get the patch sown on. I also got this tricorn hat pin to put on with the huzzah pin. 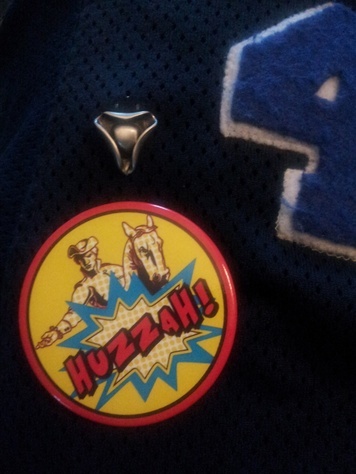 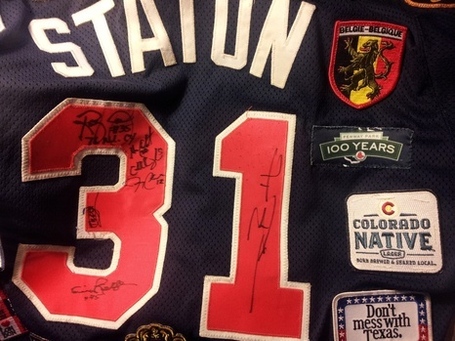 On Monday I gave the Jersey a big ole hug and kiss and sent it on its way to the next destination. Godspeed.