Our All Star: Everth Cabrera

Cabrera was named to the 2013 All-Star team after a stellar first half.

Share All sharing options for: Our All Star: Everth Cabrera

Before this season began, if someone had said that Everth Cabrera was going to be representing our Padres at the 2013 All-Star Game, that person might have been laughed out of San Diego. After all, the switch-hitting speedster has been mediocre at best since his breakout rookie season in 2009 after the Padres took him from the Rockies in the Rule 5 Draft and put him in the starting lineup straight out of Single-A. Last year he led the National League in stolen bases, but otherwise put together a less than impressive 2012 campaign, hitting .246 overall (.267 from the left and .195 from the right) with a .648 OPS in the 115 games he played in.

But when the shortstop went home to Nicaragua this past offseason, he was determined to turn it around with the help of two of his close friends. He spent all winter practicing his swings from both sides of the plate against both left- and right-handed pitching (this is where his friends factored in). Coming into the 2013 season, he was projected by most to take up the leadoff spot in the lineup because, despite his previous struggles at the plate, he's also shown us glimpses of great potential. In other words, he's been streaky in the past, but his hot streaks were always an encouraging sign that he could be a great player some day.

And now it seems like that day has come. All that work Cabrera put into last Winter has paid off. More than halfway into the season, he has raised his batting average to .300 and his OPS to .787. His 3.5 fWAR is the highest among all Major League shortstops and he's already collected 31 stolen bases in the 70 games he's played in, putting him on pace to beat his 2012 total.

It hasn't been the smoothest road for Cabrera this season. Beginning in the offseason and still continuing today are the talks of his possible involvement in the Biogenesis scandal. He has consistently and vehemently denied any link to the Miami-based clinic, but it has been an issue that seems to keep rearing its head. Cabrera also struggled a bit on the field at the start of the season, at one point committing crucial errors in back-to-back games in the first week that had some people wondering if he needed to re-learn his fielding fundamentals. But since April 6th, he's only committed two more errors all season and has become one of the best fielders on the team.

His glovework was something that was missed sorely when another bump in the road came along for Cabrera as he was sidelined for over two weeks with a sprained hamstring in the latter part of June. The injury sent him to the 15-day DL and forced him to miss 17 games, but he made his return to the lineup on Friday and will now be able to participate in the All-Star festivities.

Mark Grant caught up with Cabrera yesterday after the game against Washington to discuss the All-Star nod. He explained to Grant how Bud Black broke the news to him by pretending he was sending him to Tucson to play a couple of games for the Triple-A Club before cracking a smile and revealing that the shortstop was actually going to be heading to Citi Field as the Padres' 2013 All-Star. "I started crying... I was so excited."

Cabrera is the first position player to make the All-Star team for the Padres since Adrian Gonzalez in 2010. He is the first shortstop since Tony Fernandez in 1992. And at age 26, he is the youngest San Diego All-Star since 2008 (Gonzalez - also 26).

As many of you may know, I've been a bit of a Cabrera fan since the beginning. I've had this big 33'x41' poster of him on my wall since 2010 and yesterday I added a little something to it. 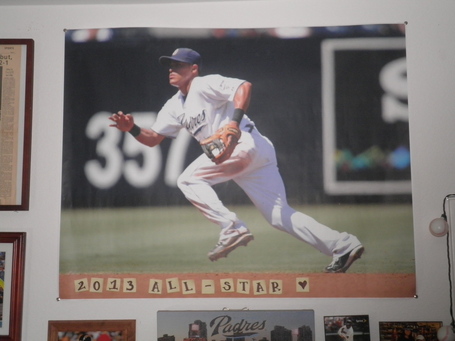 It's amazing to see how far he's come and all the success he's had this season. In my opinion, there was no other Friar more deserving of the All-Star nod than this guy and I am so much more excited for the All-Star Game now than I have been in years. You can bet that on July 16th, I will be following the game and anticipating the moment when Cabrera gets put in (yes, TWSS). I know he'll make the Friar Faithful proud.