The "news" came out about a week and a half ago that Matt Antonelli officially retired. I put "news" in quotes because it wasn't news to anybody who keeps up with Antonelli's blog, where he announced that he "decided to hang up the cleats and move on to the next phase in [his] life" two weeks before that.

Antonelli was picked seventeenth overall in the 2006 draft and worked his way up to San Diego by 2008. Unfortunately, he hit below the Mendoza Line in 57 AB over 21 games and never made his way back. Due to injuries, he was never able to put together another full season on the field as he bounced from AAA team to AAA team in the Nationals, Orioles, Yankees, and Indians organizations.

I already had a couple of Matt Antonelli cards but then I saw this one a week or so ago and knew I had to have it. It's from an insert series Topps Finest put out where they manufactured 75 letter patches of each letter of a player's last name and then the player autographed all of them. In other words, this one is one of 75 'E' patch Matt Antonelli cards(#50 of 75), and there are 75 'A' patches out there and so on. Some high-end collectors seek out one of each letter of a player and put them on a shelf in order. Whatever. I definitely wasn't planning on doing all that. I just want to make it cease to be a card and sew the signed patch on the Sisterhood of the Traveling Jersey jersey eventually.

When I had the Sisterhood jersey last year, I sewed on a small jersey swatch from a David Wells game-worn card that I destroyed just for the occasion. This one seemed even cooler because it would add to the jersey's collection of autographs. Plus, I just like the idea that people who take collecting way too seriously would be outraged by someone purposely destroying a relic card.

...but until then I'll just put it with my other autographed cards. No need to cut it up until I have to. 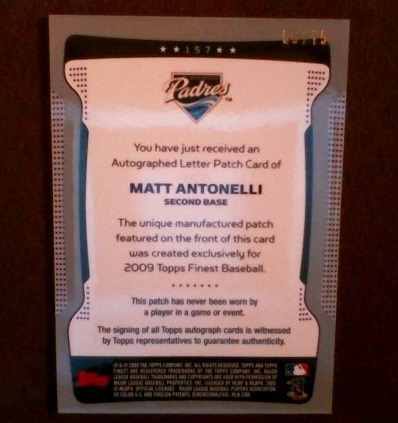